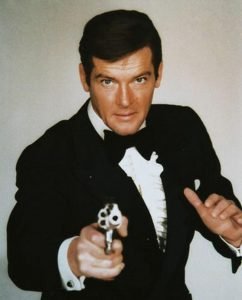 The dress shirt repeats George Lazenby’s now-dated style with a ruffled front, with one row of ruffles down each side of the placket. The lack of such flamboyant clothing that made it into Live and Let Die is more in character for Bond. The cream silk shirt is most likely made by Frank Foster. It has a spread collar, and its double cuffs have the link holes very close to the fold. Moore wears a wide black bow tie and a white handkerchief puffed in his breast pocket.

Moore wore this dinner suit to the Live and Let Die premiere.