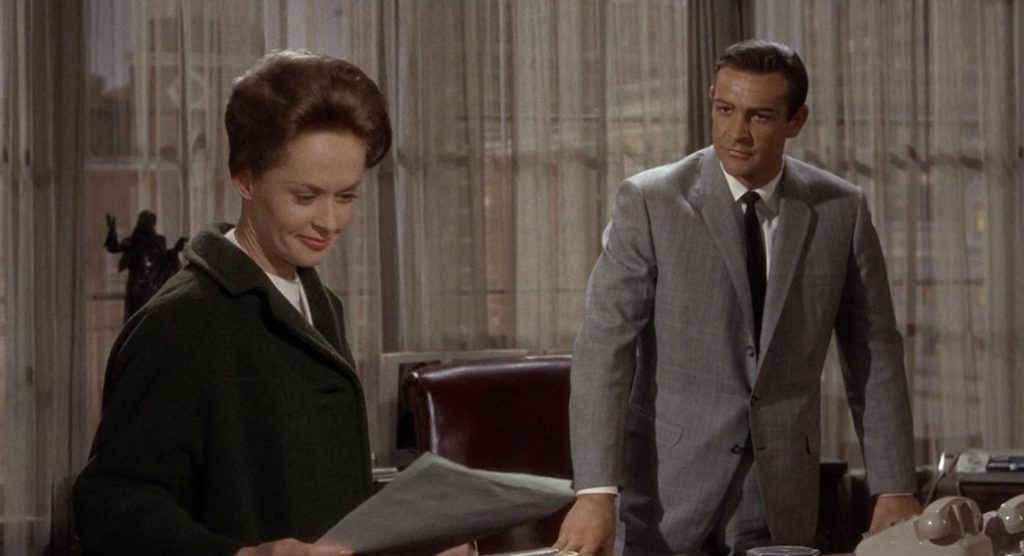 In honour of Sean Connery’s 84th birthday earlier this week, let’s look at a glen check suit he wears in Alfred Hitchcock’s Marnie that’s quite befitting for James Bond. The lightweight black and white glen check cloth is in a hopsack weave, and it’s very similar to the cloth of the glen check suit that Connery wears in Goldfinger. However, the two-and-two—or puppytooth—section of the glen check has a smaller repeat. The cloth is approximated in the diagram below.

The button three suit jacket has narrow lapels that roll through the top button but not down to the middle button. The jacket is cut with a full chest, straight shoulders on the natural shoulder line and roped sleeve heads, and it has no vent, three buttons on the cuffs and pockets with very narrow flaps. The buttons are grey horn, as opposed to the grey plastic buttons that are on Sean Connery’s worsted Anthony Sinclair suits for Bond. Not much of the trousers can be seen, but they most likely follow the other suit trousers in the film and have double forward pleats, turn-ups and button-tab side-adjusters. 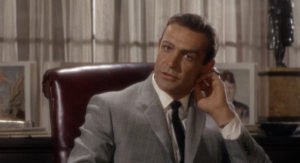 The white shirt—it looks cream, but I suspect that’s due to the way the film is treated because all of the colours have been warmed—has a spread collar, rounded single-button cuffs and a placket stitched close to the centre like on Frank Foster’s shirts. The narrow black repp tie—which isn’t as interesting as the textured dark grenadine ties Sean Connery often wears as Bond—anchors the overall light-coloured outfit by giving the outfit the necessary contrast to flatter Connery’s cool, high-contrast complexion. Because the tie is so narrow, it’s difficult to tell if the symmetrical knot he is using a Windsor or Half Windsor knot. Connery secures his tie with a tie bar that is mostly obscured by his jacket, slightly angled downward and placed about an inch below the jacket’s top button. 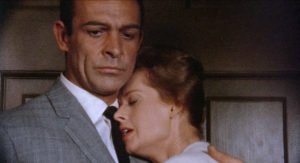