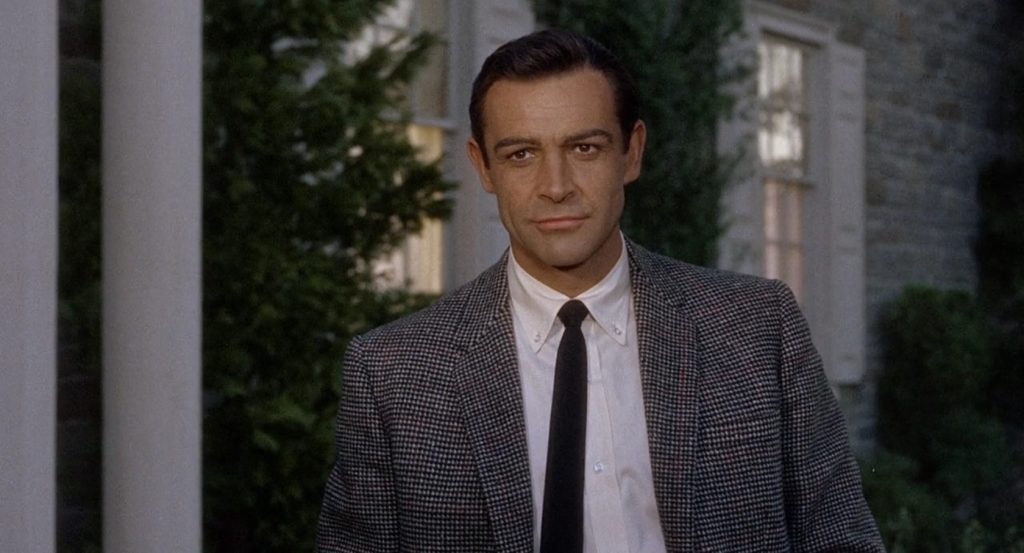 Previously I wrote about the black and grey herringbone tweed sports coat that Sean Connery wears as Mark Rutland in the 1964 Alfred Hitchcock film Marnie. The houndstooth check sports coat that Connery also wears in Marnie is made in the same style as the herringbone sports coat, and he wears it in a very similar manner. The jacket’s houndstooth check is in black and white (or rather slightly off white), and it has a windowpane that replaces the black in the check with red. The colours of this jacket look great on Connery’s cool complexion and allow it to work in informal settings outside the country. The cloth of this jacket is very similar to the cloth of George Lazenby’s hacking jacket in On Her Majesty’s Secret Service.

The jacket is likely made by an English tailor and is cut with straight shoulders on the natural shoulder line, roped sleeve heads, a full chest and a full waist. Though the shoulders look English, the jacket has a fuller cut since Americans often like to wear their sports coats fuller than their suit coats. The men’s costume designer on Marnie, James Linn, was likely American, and Rutland is supposed to be either American or English-American in the film. Nevertheless, the jacket still has some shape, which would show better if Connery buttoned the jacket. The jacket buttons three, but the lapel gently rolls over the top button. The jacket is detailed with flap pockets, three buttons on the cuffs and no vent. It’s an odd style choice to make a sports coat without a vent, especially one in a sporty tweed, but when worn for social occasions and not riding, the lack of vent does not matter. Non-vented jackets are very popular amongst the men in Hitchcock’s films since they have a cleaner look than a vented jacket. 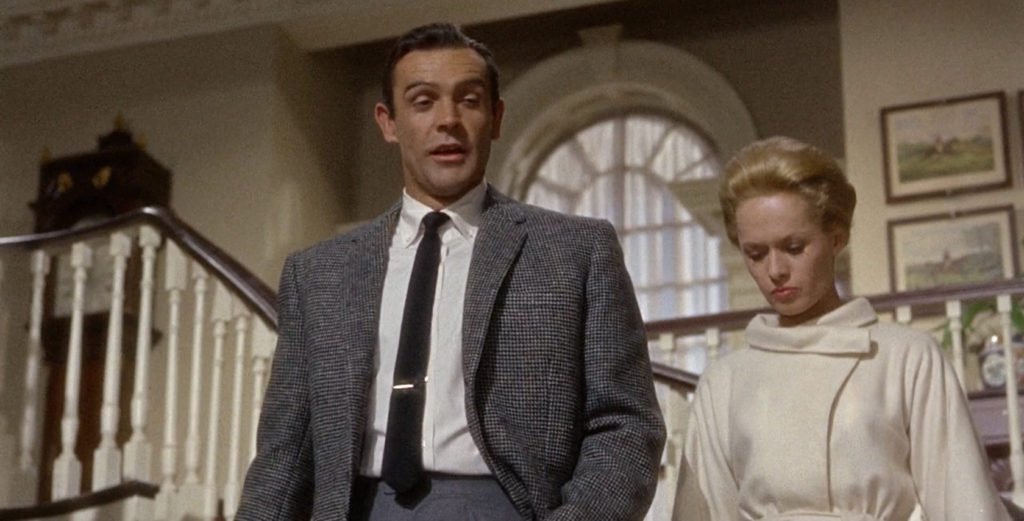 The medium grey flannel trousers are made in an English style. They have double forward pleats, a tapered leg with turn-ups, button side tabs to adjust the waist and an extended waistband closure. The choice of medium grey for the trousers isn’t the best since they have little contrast with the jacket. However, there is a bit of contrast in texture: woollen tweed for the jacket versus woollen flannel for the trousers. Flannel trousers are the perfect match for a tweed jacket. From a distance, however, the jacket’s pattern looks like solid medium grey, and because the trousers have a cooler tone than the jacket, the outfit, unfortunately, looks like a mismatched grey suit. The scale of the jacket’s check isn’t large enough to work with similarly-toned trousers.

In comparison to the English-style trousers, the shirt is an American classic that Connery never wears as James Bond: a button-down shirt. The key to a successful button-down collar is in the roll. The buttons are placed a bit higher up than where the collar points fall to assist the roll. The button-down collar is a rather casual collar, and thus Connery only wears it with sports coats in Marnie. Most people in England today would never wear a tie with a button-down collar, and button-down collars aren’t as popular in America as they used to be either. Connery’s white button-down shirt has a front placket and most likely single-button cuffs. Connery’s narrow tie is plain black, and he clips it to his shirt with a tie bar, something he never wears as James Bond. The tie bar, however, comes loose and leaves the tie dangling. There’s nothing wrong with a dangling tie, but it should not be dangling with a tie bar. Because the tie is so narrow, it is difficult to tell if he knotted the tie in a windsor or a half windsor knot. The lace-up shoes are black, and whilst they look rather serious in the informal country setting they match the black in both the jacket’s check and the tie. 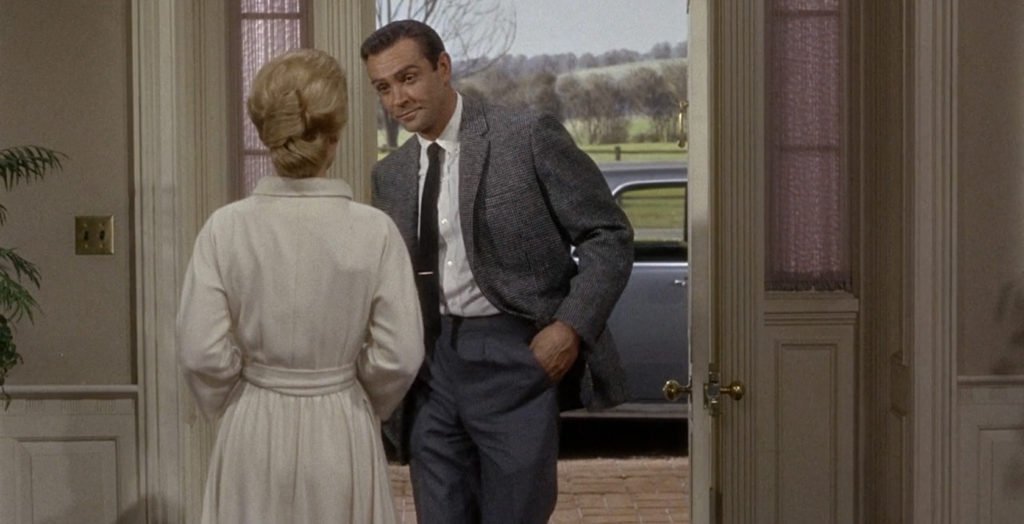