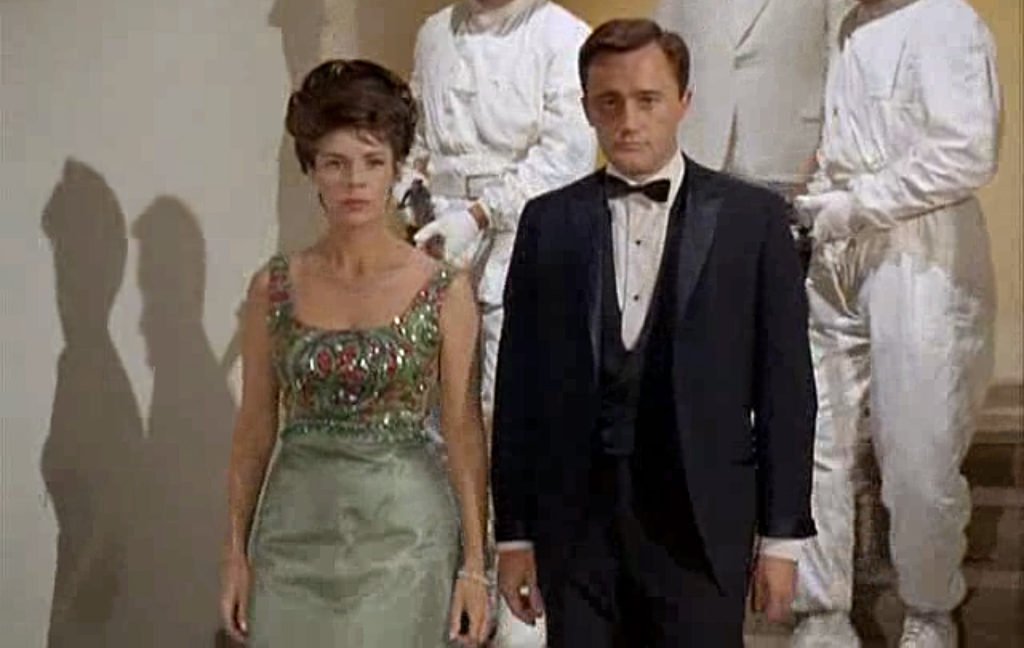 Napoleon Solo, Ian Fleming’s creation for the American television series The Man from U.N.C.L.E played by Robert Vaughn, wears black tie just as well as James Bond does. Solo’s black tie style is not as pared-down as Bond’s is, and his clothes incorporate a little more 1960s fashions than Bond’s do. In the 1965 episode “The Virtue Affair”, Solo wears a midnight blue dinner suit with midnight blue satin silk trimmings and a double-breasted backless waistcoat. 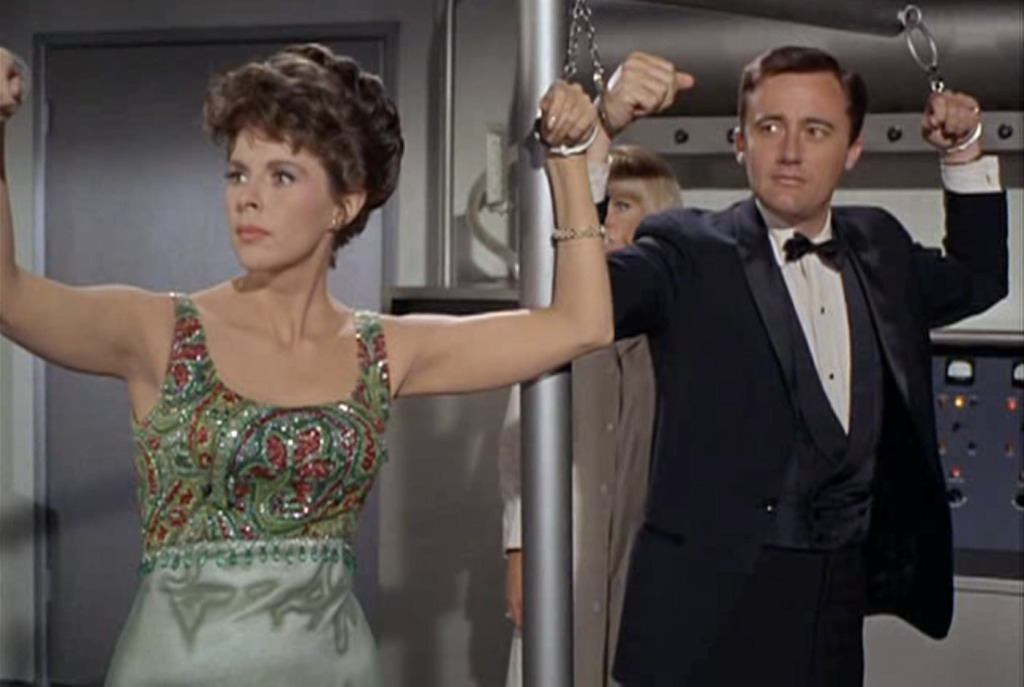 The dinner jacket is a button one with gently-rolled, narrow midnight-blue satin silk peaked lapels. The jetted pockets and single-button gauntlet cuffs are also trimmed in midnight blue satin silk. Silk-trimmed pocket jettings are not as traditional as body-trimmed jettings, which is the way James Bond’s dinner jackets typically are. Napoleon Solo’s dinner jacket has no vent. The shoulders are straight and narrow with a little padding, the chest is clean and the waist is gently shaped, though the jacket probably follows the American tradition and does not have front darts. The flat front trousers have a midnight blue satin stripe down the side of the leg and braces buttons on the outside of the waistband, which are not used. 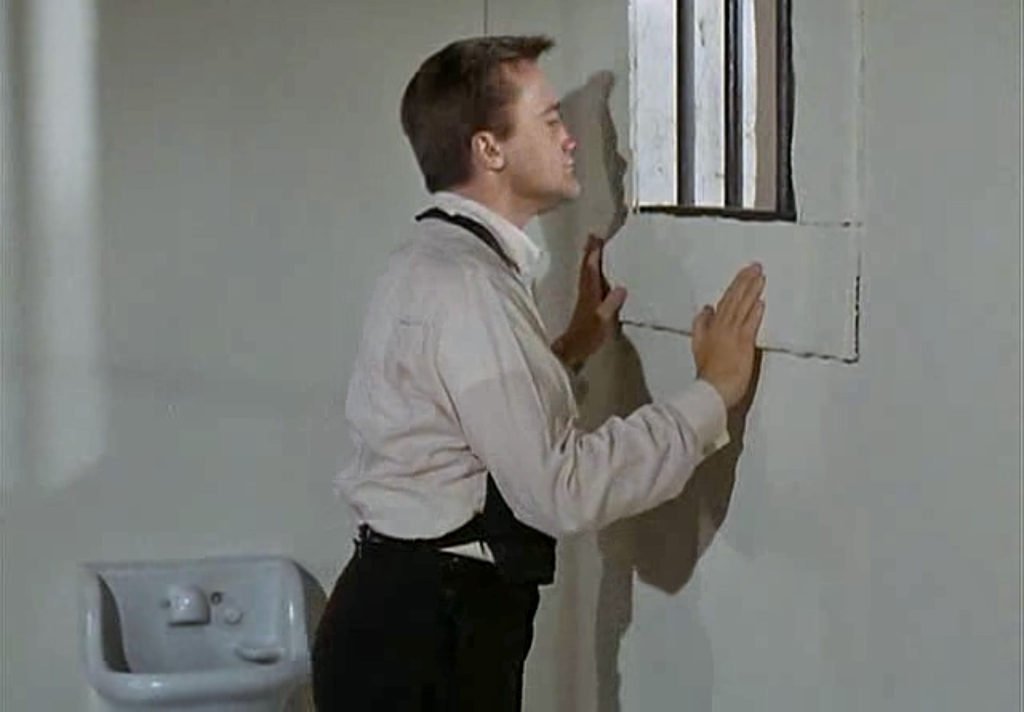 Solo’s backless waistcoat is made of midnight blue silk. The waistcoat’s shawl lapels are made in satin silk to match the jacket’s lapels but the waistcoat’s body is made in a fancier watered silk. Backless waistcoats are wear cooler than full-back waistcoats, so they’re often used as a warm-weather alternative to the cummerbund. Still, they can also be worn year-round. With the dinner jacket on—and it should always stay on when in the company of others—the backless waistcoat looks just the same as regular waistcoat. It looks rather unattractive when the jacket is off, as Solo demonstrates in his jail cell. It has an adjustable strap across the back of the waist like on a cummerbund, and it has an adjustable strap that curves around the back of the neck. This allows the off-the-peg waistcoat to fit a large variety of figures. Whilst Solo’s waistcoat appears to be ready-to-wear, bespoke tailors can make backless waistcoats as well. Solo’s waistcoat is double-breasted and has six buttons with three to button in a keystone arrangement. The waistcoat is in the low-cut evening style so the buttons have little vertical space between them.

With the dinner suit Solo wears an ivory dress shirt. It has a spread collar and double cuffs fastened with large round silver cuff links. The front has small pleats, which are also known as “swiss” pleats or “pin tucks”. The front placket has interesting scalloped edges and is fastened with three black studs. The back of the shirt has shoulder pleats. The bow tie is black and does not match the rest of the silk trimmings in the outfit, but it is not a significant faux pas considering it can be difficult to find proper midnight blue bow ties. Solo’s shoes are black patent leather plain-toe slip-ons. 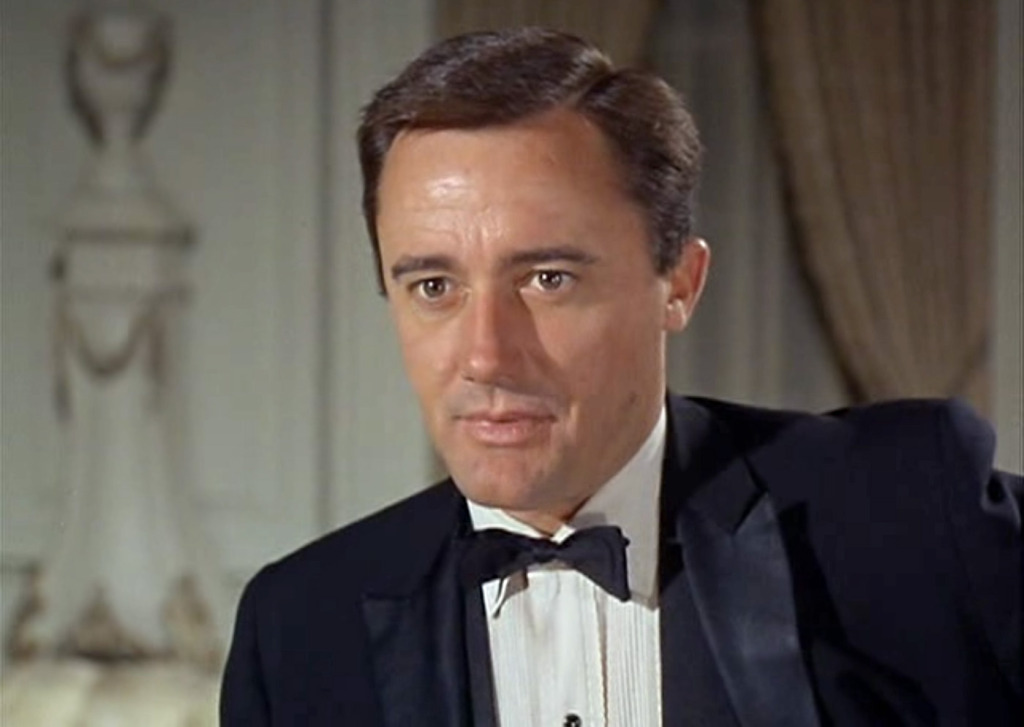 For more on Napoleon Solo, see the post I did on his black and white glen check suit.