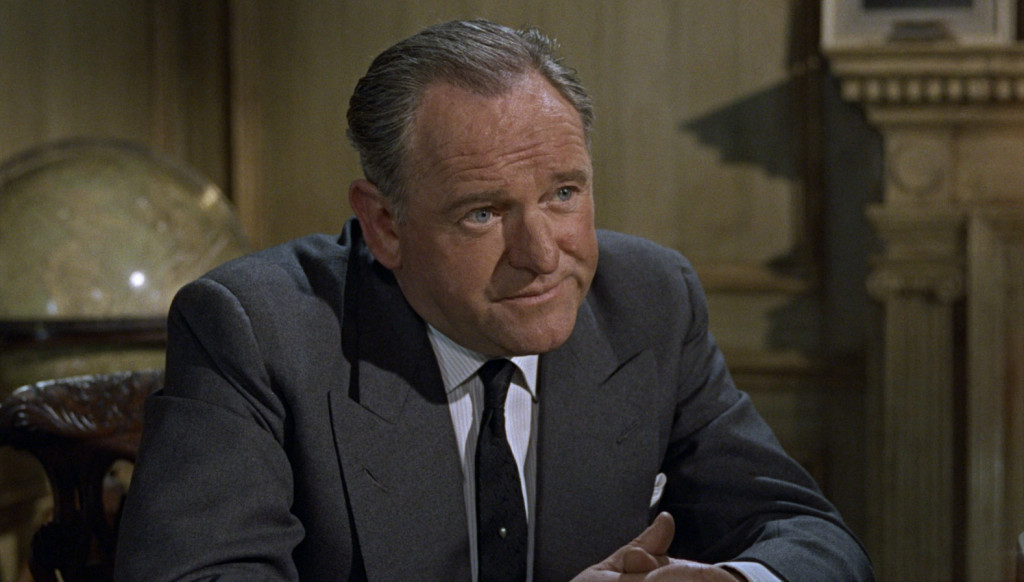 Ralph Fiennes isn’t the first M to wear a double-breasted suit. Fifty years earlier in Dr. No, Bernard Lee wore his one and only double-breasted suit as M. Like many of Lee’s suits and Fiennes’ double-breasted suit, this suit is flannel. In particular, this suit is a mid grey woollen flannel, which has the old-fashioned look that’s well-suited for the character. Whilst Fiennes’ suit is traditional and not characteristic of any era, Lee’s suit is very characteristic of suits from the 1950s. Its large, padded shoulders and wide lapels were outdated for 1962, as was the buttoning style. The jacket has four buttons in a keystone arrangement with one to button, which was never a very popular style with English tailors. It wasn’t uncommon in the 1940s and 1950s, but by the 1960s the low-buttoning double-breasted suits were out of fashion. The style returned in the 1980s and has been out of fashion since the mid 1990s. It’s not as classic as the style of Ralph Fiennes’ double-breasted suit, but if it is cut well—which can’t usually be said for the baggy 1980s examples—and fits well it can be a good choice for shorter or heavier men.

Lee’s jacket has jetted pockets, 3-button cuffs and no vents. As is traditional on a double-breasted jacket, both peaked lapels have a buttonhole since both sides of the jacket have fastening buttonholes. For From Russia With Love, Bernard Lee wears a more contemporary suit, though it’s still a little more traditional than Sean Connery’s suits. 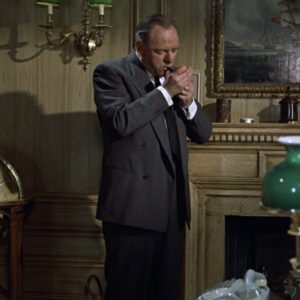 Though Bernard Lee’s M’s is known for his bow ties, he wears a black four-in-hand tie that has a fancy self pattern in his first appearance in the James Bond series. The tie is a fashionable, narrow width and it’s much narrower than his lapels. Though the narrow tie is a bit incongruous with the wide lapels, it works much better than the opposite would. He uses a tie pin to anchor the tie to his shirt. Lee doesn’t return to wearing four-in-hand ties until the final act of On Her Majesty’s Secret Service. His shirt is a fine bengal stripe in light grey and white, which complements his grey hair and grey eyes. The shirt has a spread collar, plain front and double cuffs. He wears a white linen pocket handkerchief that is mostly obscured by his wide lapels.