Since Royal Ascot is next week, we’re going to look at M’s, Q’s, and Sir Godfrey Tibbett’s morning dress in A View to a Kill. I already wrote about Bond’s morning dress in A View to a Kill a few years ago. M’s (Robert Brown) morning dress will be the first in this morning dress series, since his is the most pedestrian. The morning coat—known as a cutaway to the Americans—is a type of tailcoat worn for formal daytime occasions, and it is almost always single-breasted compared to the double-breasted evening tailcoat. The front skirt cuts away to the tails in the back. It looks almost like a long suit jacket that is cut away in front, but it has a waist seam like the evening tailcoat and other body coats. M’s black morning coat is the classic model with a single button link closure and peaked lapels. The link closure is traditionally two shanked buttons on a chain with a buttonhole on each side of the front, and when the link button connects the two side the front edges meet instead of overlap. It looks like there are two buttons on the front side by side, and it gives the jacket a more symmetrical look since one side isn’t overlapping the other. It’s somewhat like a cufflink, though it doesn’t pull the two sides of the jacket so closely together. M’s link closure is made a little differently. His coat has a regular single button on the right side with a corresponding buttonhole on the left side, but there is also a button on a long thread shank sewn on the backside of the jacket behind where the regular button sewn. To complicate things, M’s jacket appears to be missing the regular button attached to the front of his coat and only has the button that comes from behind, so I cannot use M to illustrate the way the link button properly looks. M morning coat buttons are black horn, and there are three buttons on the cuffs. The coat has a welt breast pocket but no other pockets. 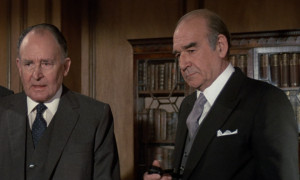 Under the morning coat M wears a medium grey button six waistcoat. Waistcoats with morning dress are traditionally light colours—light grey, light blue, buff and cream—and sometimes made of linen, but M’s medium grey worsted wool waistcoat still provides enough contrast for the same effect. Since M’s waistcoat is wool, it’s possible that he took it from one of his three-piece suits. It’s not ideal to use a waistcoat from a suit, but as long as it’s light enough in colour it works. M’s trousers are hardly seen, but they look like they are solid grey in a shade darker than the waistcoat. Most likely they follow morning dress tradition and have some sort of pattern. They aren’t the bold grey and black “cashmere stripe” pattern, which is the most formal of morning dress trousers. Most likely they are a fine houndstooth pattern in black and white, which could appear as solid grey from a distance. Checks in black and white are just as traditional for morning trousers and are great for the less formal of morning dress occasions like Royal Ascot. Because the three pieces of M’s morning dress do not match, it cannot be called a “morning suit” like Bond’s all-matching morning dress can be called. The black coat with separate waistcoat and trousers is more formal and more traditional than the morning suit.

M’s shirt is an ordinary white formal shirt and not the most appropriate shirt for morning dress. It has a point collar and button cuffs. Though detachable collars are no longer a necessity with morning dress, a more formal wide spread collar like what Bond wears is preferable to M’s point collar. Double cuffs are also preferable to button cuffs, but M’s button cuffs mostly stay hidden inside the jacket sleeves. M wears an amethyst-grey lightly-ribbed silk tie, tied in a four-in-hand knot. M wears all of the traditional Royal Ascot morning dress accessories: a light grey felt top hat with a black ribbon, thin and unlined light grey gloves with a button at the wrist, and a white carnation boutonniere. Of the four men in morning dress, M and Q are the only ones wearing handkerchiefs in their breast pockets. M’s handkerchief is white linen and folded with three points peeking out.

Though M doesn’t completely follow morning dress protocol, he makes due with what he has and his clothes fit well. His outfit might not be perfect, but he is still elegantly dressed for the race.