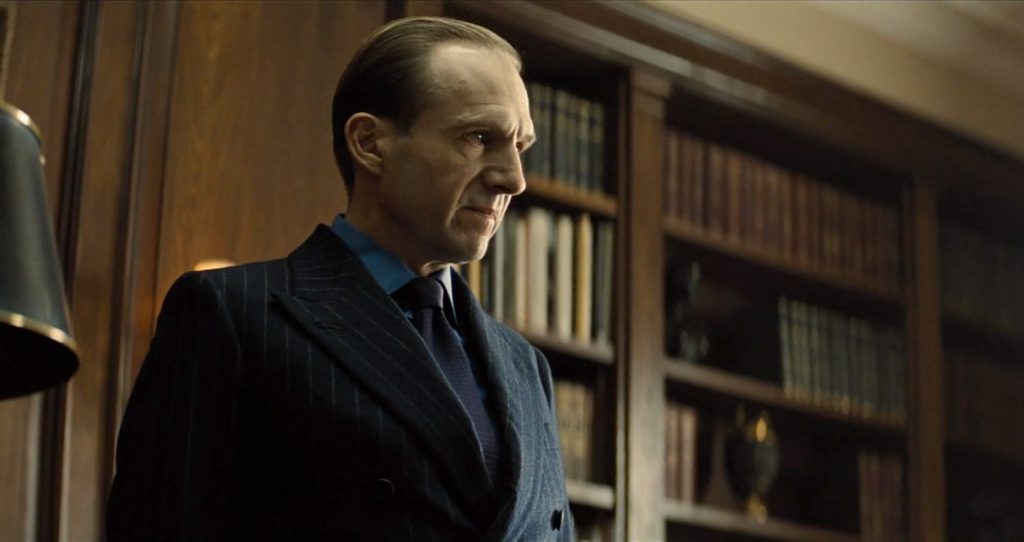 After creating masterpieces for Skyfall, Timothy Everest returned to tailor Ralph Fiennes’ wardrobe for Spectre. Fiennes plays Bond’s boss M, known as Gareth Mallory in Skyfall, and his suits follow the same styles as the suits in Spectre. When we first see M in Spectre he is wearing a similar double-breasted suit to navy chalk stripe double-breasted suit he wears in the last scene of Skyfall. But whilst the suit in Skyfall is made of a traditional heavy flannel, this suit is made from a lighter flannel. Timothy Everest’s website commented on this change in cloths:

Working closely with the 007 wardrobe team, the brief was to contemporarise M from heavy worsted wools and flannels to a more modern, medium weight Super 120’s worsted wool and baby cashmere coatings. 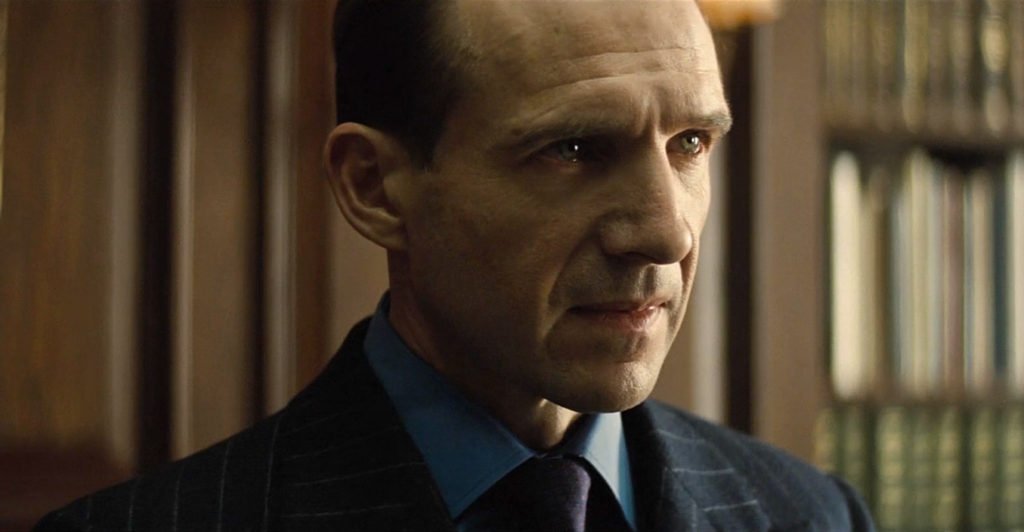 Though this new suit is still a flannel, it’s a lighter weight than before. This lightweight flannel is likely 11 oz, which gives the traditional cloth an updated look. M wears a navy suit with white chalk stripes spaced about 3/4″ apart in his office when he meets with Bond. When dealing with Max Denbigh in the corridor later in the film he wears the same suit.

The suit jacket is a classic button two, show three double-breasted. M fastens both buttons on the jacket, which reflects the way a naval officer would button his double-breasted uniform. It has a classic Savile Row cut with straight shoulders, roped sleeve heads, a full chest, a nipped waist and medium-wide peaked lapels. This is the ultimate authority style and gives M an incredible presence. The jacket is detailed with straight flap pockets with a ticket pocket, double vents and four buttons on the cuffs. The edges are finished with subtle pick stitching, and the buttons are dark horn with a four-hole domed centre. 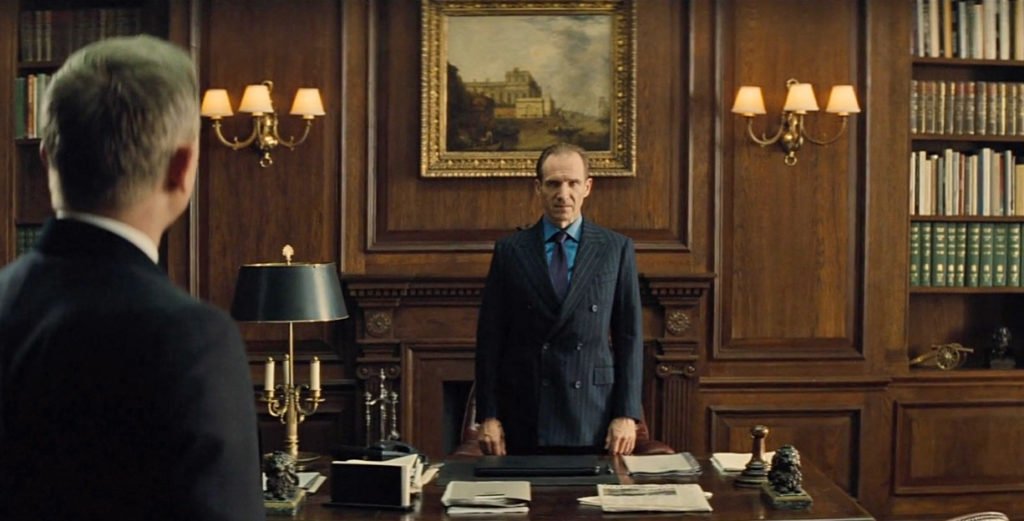 The suit trousers have a plain front, slanted side pockets and medium-width tapered legs that likely have turn-ups. The waistband has a tab extension with a hidden clasp closure and slide-buckle side adjusters. The rear has two tabs for the braces to attach to, which raises the back of the braces like a fishtail back would do to make the braces more comfortable.

The suit is thoroughly traditional and completely timeless. It may not look as hip as Daniel Craig’s Tom Ford suits, but this suit will never look outdated. The chalk stripes and powerful—but not excessive—cut give M the appearance of the important and commanding man that he is. It’s an old-money look but not a pretentious look. 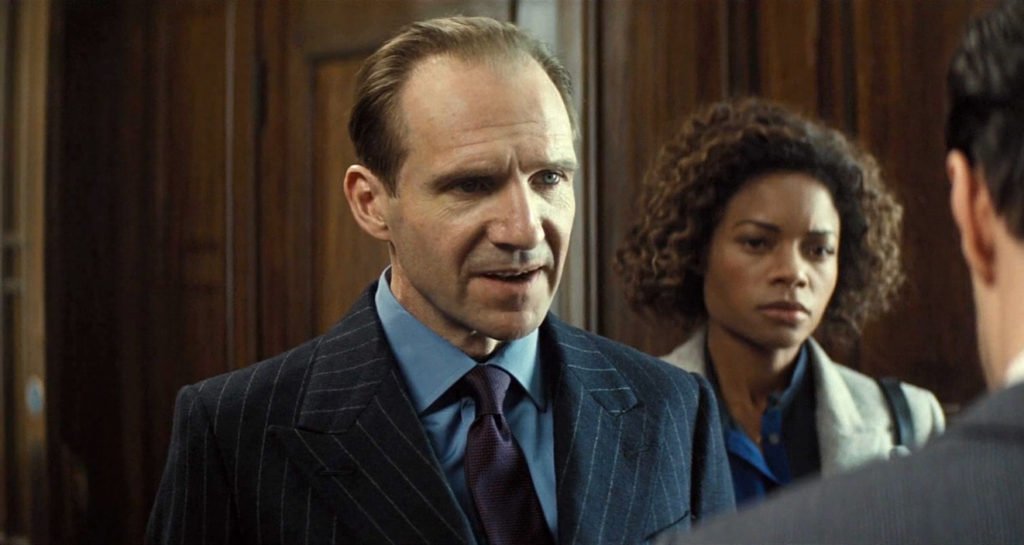 At his meeting with James Bond at the start of the film, M gives this outfit a modern look with a mid blue cotton poplin shirt rather than a more traditional lighter shirt. The shirt has a spread collar, plain front and double cuffs. M wears a navy tie with magenta squares with this shirt. When encountering Denbigh in the corridor later in the film, M wears a sky blue shirt with a spread collar, front placket, double cuffs and side pleats over the shoulders. The shirt has a traditional full cut. With this shirt he wears a navy tie with a tiny motif that may possibly be pink. The lighter sky blue shirt is more flattering to Fiennes’ pale complexion than the vivid mid blue shirt. 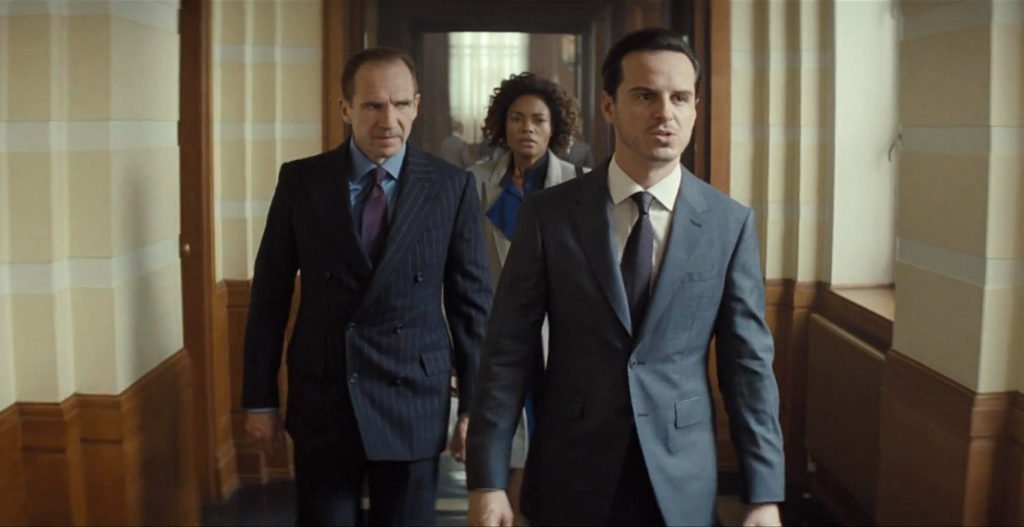 M wears braces with his suit trousers, and they may be the same braces he wears in Skyfall. The Skyfall braces are navy with a navy embroidered fleur-de-lis braces motif and were made by Albert Thurston. The braces have black leather ends and trimmings and brass levers. Wearing braces rather than using the side-adjusters gives M an old-fashioned air, but with all of his problems at least he doesn’t have to worry about his trousers slipping. 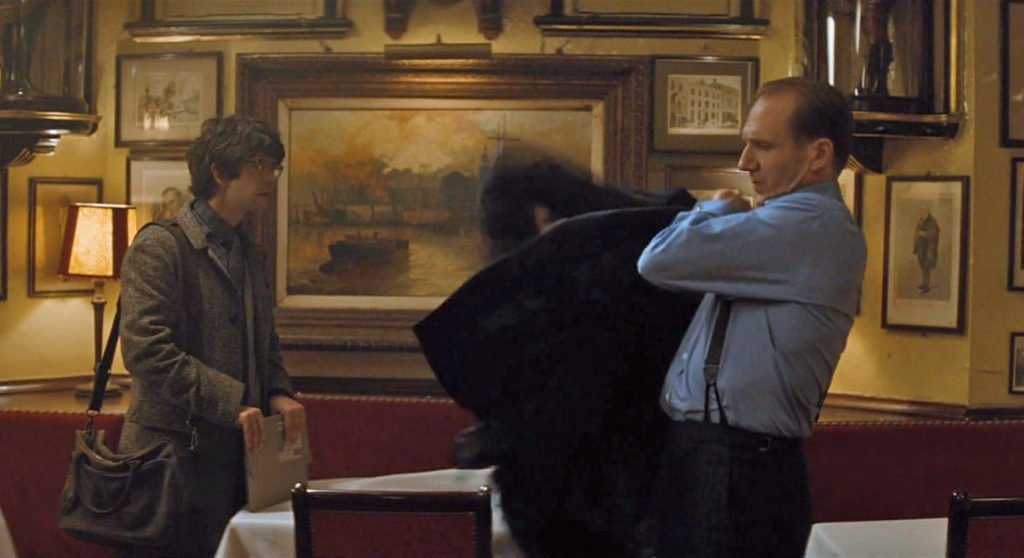