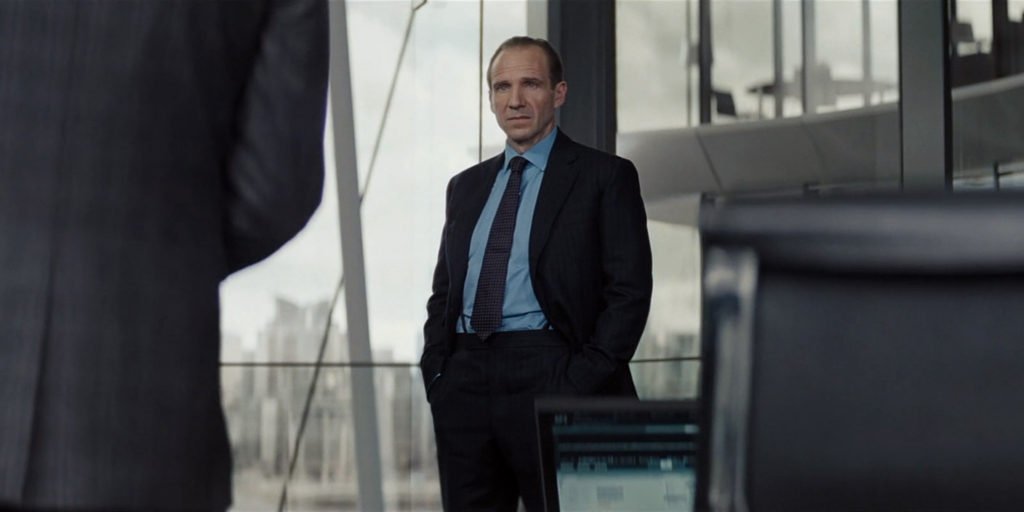 Timothy Everest tailored a slightly more modern wardrobe for Ralph Fiennes to wear as M in Spectre than he did for him in Skyfall. The most modern of these suits is the only single-breasted suit fully seen in the film: a two-piece navy worsted flannel with an electric blue chalk stripe. Since a blue chalk stripe doesn’t have as much contrast with navy as a white stripe would, the “electric” description is a little lost. Fiennes wears a similar three-piece suit in Skyfall, Sean Connery wears a navy suit with a blue chalk stripe in Diamonds Are Forever and Daniel Craig wears a navy suit with a blue stripe in Quantum of Solace.

M’s suit jacket is a button two and has a classic English cut with straight shoulders, roped sleeve heads, a full chest, nipped waist and medium-width lapels. The jacket is detailed with slanted pockets, a ticket pocket, double vents and four buttons on the cuffs. The edges are finished with subtle pick stitching, and the buttons are dark horn with a four-hole domed centre. 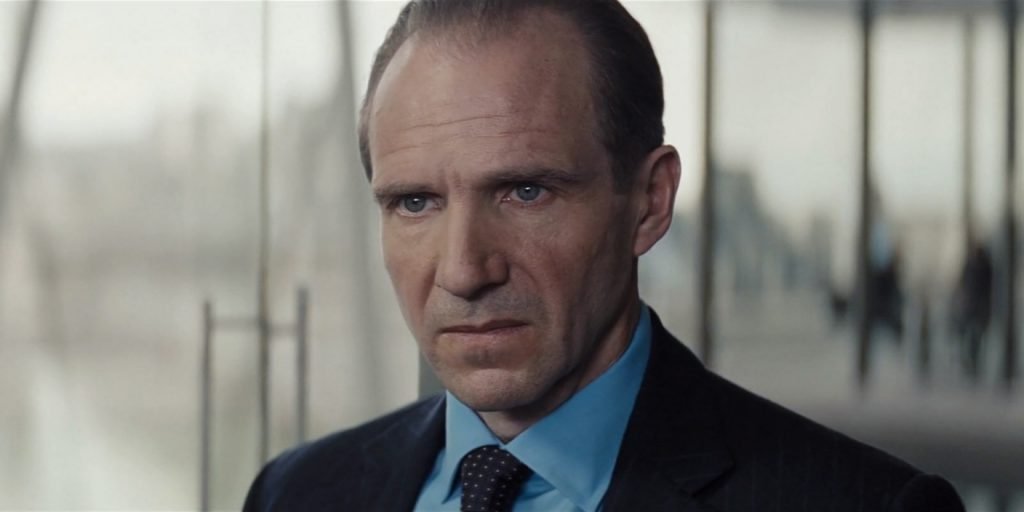 The suit trousers have a plain front, slanted side pockets and medium-width tapered legs with turn-ups. The waistband has a three-inch square tab extension with a hidden clasp closure and slide-buckle side adjusters. The rear has two tabs for the braces to attach to, which raises the back of the braces like a fishtail back would to make the braces more comfortable. M reveals the black leather tabs of his braces when he pushes the jacket open by placing his hands in his pockets. Opening the jacket also reveals the trousers’ traditional rise to the waist.

Spectre has proven to be the James Bond film of short trousers. Bond’s suit trousers are noticeably short, and so are M’s. M’s trousers just barely touch his shoes, though there is a slight break in front. The trousers overall are not hanging cleanly, and this is likely a result of the braces not sitting properly over Fiennes’ shoulders or wearing the trousers higher than they were meant to be. If a gentleman is going to wear his trousers too short, the trousers should at least have a narrow leg like Bond’s trousers have. M’s trousers don’t have wide legs by any means, but they are wide enough to flap around when too short. Braces typically ensure that the trousers always hang from the proper height, but when the braces aren’t adjusted properly we might see this.

With this suit, M wears a sky blue shirt with a spread collar, plain front and double-cuffs. The tie is a subdued neat pattern of navy squares on navy. Each square has a small white dot in its centre. His shoes are black cap-toe oxfords, the standard shoe for a city suit. 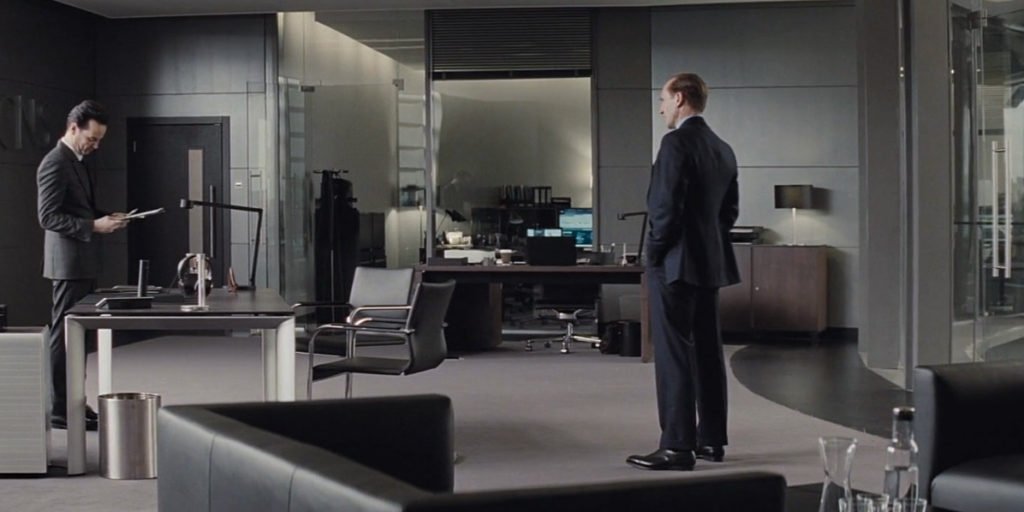 M’s outfit is traditional but is neither old fashioned nor outdated. Foregoing the braces and cutting the suit just slightly closer to the body would make it completely appropriate for Bond to wear. M’s suit is still quite traditional compared to the trendier looks Timothy Everest often tailors. It’s rather a shame M keeps the jacket open the entire scene, so we are deprived of seeing the beauty of the bespoke cut in all its glory.