How much should a man match his clothing for the day? Sean Connery’s James Bond wardrobe follows a simple system: navy ties with navy suits, navy or black ties with grey suits, and brown ties with brown suits. Shirts are white, light blue and cream. And the suitings are simple, in blue or grey with the occasional brown. The literary Bond has an even simpler system of dressing, which always matched a black knitted tie with a navy suit. 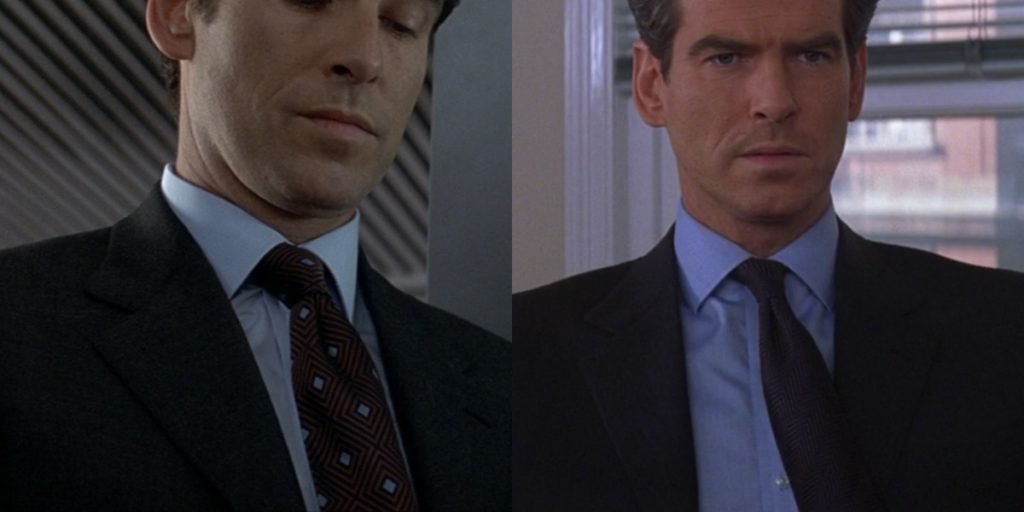 Lindy Hemming, the costume designer on all four of Pierce Brosnan’s Bond films, developed a system for dressing Brosnan, one with very carefully planned outfits that coordinate in both obvious and subtle ways. Hemming often used limited colour palates but combined the colours in unique ways. She incorporated the not-so-common combination of blue and brown into many of the outfits, and we saw that done in a few different ways.

In one method she matches a charcoal suit with a navy and brown tie. We first saw that in Tomorrow Never Dies with the two-piece suit in Hamburg (above left). The diamond-pattern tie also picks up the light blue in Brosnan’s shirt. In the opening scene of The World is Not Enough, we see the blue and brown tie come back in a chevron pattern with the charcoal suit (above right). That suit appears to be solid charcoal but it actually has blue and brown threads in it, which is the reasoning for the tie’s colour. Logically, the suit in Tomorrow Never Dies would also have blue and brown threads. 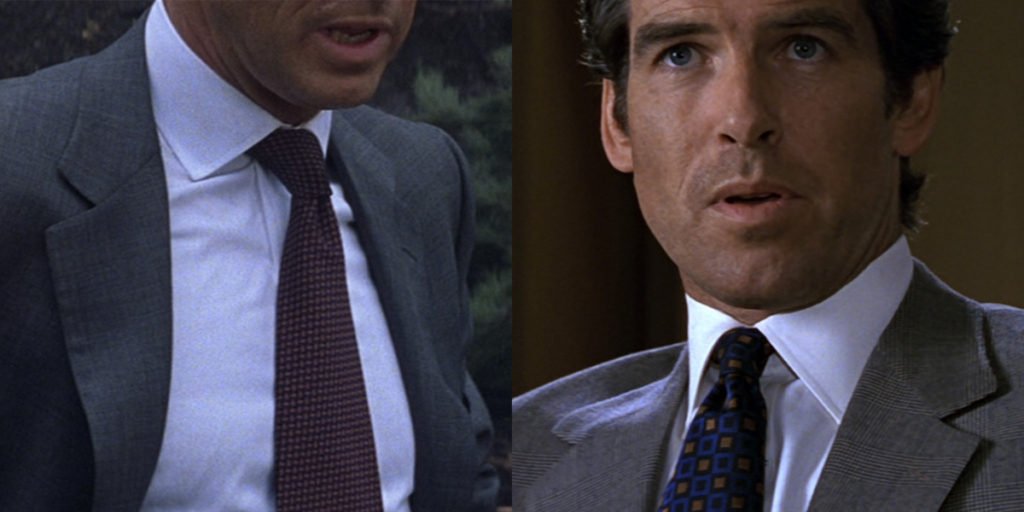 The chevron tie from the opening scene of The World is Not Enough returns later in the film with grey pick-and-pick suit. And with this suit later in the film, Brosnan wears a blue tie with light brown ticks (above left). The blue and brown in the ties blend together to form a neutral tie, which complements the completely neutral grey suit. A white shirt helps to neutralise the outfit’s colours, since if he wore a blue or cream shirt, one of the colours in each tie would have been more noticeable.

Brosnan wears a blue and sand Prince of Wales check suit (above right) for his visit to the office in GoldenEye. The blue and sand colours balance each other and the suit looks almost grey. Here the tie is blue and light brown, to emphasize the two dominant colours in the suit. Though the tie is more blue, though the ivory shirt balances that out with more warmth. And the blue pocket handkerchief coordinates with both the suit and tie. This even combination of blue and brown throughout the outfit provides a neutral look. 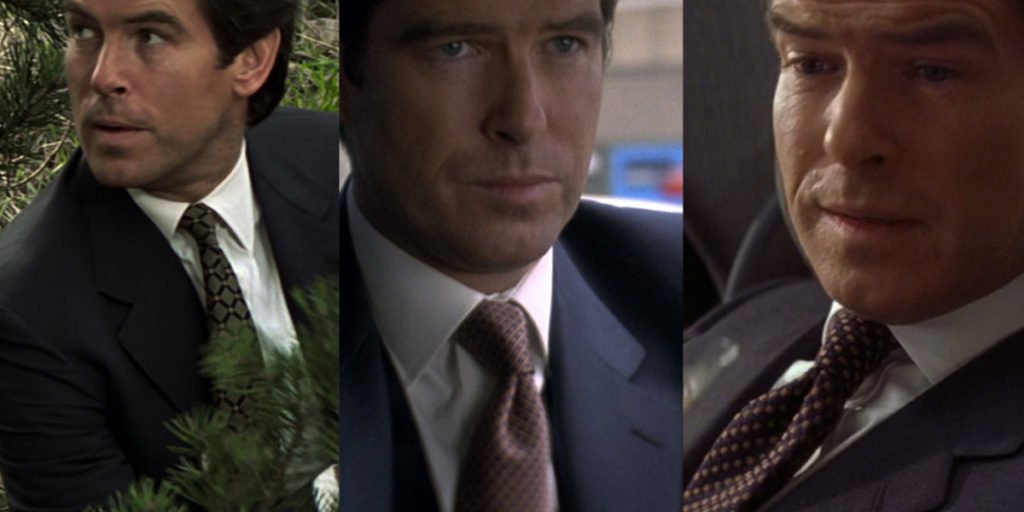 One suit we see in all four of Brosnan’s is the semi-solid (usually Birdseye) navy suit, which tones the navy down with a white. Hemming probably finds that Brosnan looks better in a muted navy rather than a rich navy (which looks great on someone like Roger Moore), and she accessorises those suit in two different manners. In GoldenEye (above left) and Tomorrow Never Dies (above middle), those suits are worn with ivory shirts. In GoldenEye the tie is navy, gold and cream, whilst the tie in Tomorrow Never Dies is a similar combination of navy and bronze. And there he goes a step further by matching the bronze in his tie with a light brown overcoat. In Die Another Day (above right), Brosnan wears a tie of navy and gold squares with his navy birdseye suit in a brief plane scene. So again, we see that combination of blue and brown tones.