I almost always think about James Bond when I purchase clothes and when I put them on, but I like to put my own spin on how I compose my outfits. Every part of my outfit pictured here is inspired by James Bond, but it does not directly copy any James Bond look. The mostly monochrome outfit consists of a black and cream checked jacket, grey flannel trousers, a white shirt, a grey tie and brown chukka boots.

The jacket is a vintage find from the 1980s. It does not have a brand label inside, but I think it may be from Paul Stuart. The cloth is 50% silk and 50% wool, and it has a bold black and cream plaid that is larger than a Glen Urqhart check. Overall the jacket reads as mid grey. I got it because it reminded me of Roger Moore’s bold checked jacket in The Man with the Golden Gun, and it also reminded me of some jackets that Pierce Brosnan wears in Remington Steele, another significant style influence for me. The jacket has a button-two front, flap pockets and long double vents. The gorge is slightly lower than on a modern jacket, but it looks classic.

The trousers are medium-dark grey flannels from Niven Tailors. They have frogmouth pockets, which were influenced by Sean Connery’s frogmouth-pocket trousers in Goldfinger and You Only Live Twice. The grey flannel was inspired by the trousers that Connery wears with his blazers in Thunderball and Diamonds Are Forever. Instead of Connery’s Daks tops, these trousers have slide-buckle side adjusters inspired by Daniel Craig’s Tom Ford suit trousers. I find that this kind of support functions better. The trousers have a narrow straight leg like George Lazenby’s trousers in On Her Majesty’s Secret Service have.

I went with a low-contrast jacket and trouser combination like Sean Connery often wears as Bond. Overall, my trousers look a little darker than the jacket, so there’s that contrast. The contrast in the perceived shade of the jacket’s grey and the shade of the trousers’ grey varies depending on the light, and in lower light there is surprisingly more contrast. The main contrast between the two is in pattern and texture. The jacket has a bold pattern and a little sheen, whilst the trousers are solid with a nap. The two fabrics are very different, but they play well together because both are in medium-weight cloths.

The white cotton poplin shirt is from Turnbull & Asser and is a bespoke shirt sample that I won in a contest sponsored by HandCut Radio and Thomas Mason. The shirt has a larger variation on their Prince of Wales spread collar, which was inspired by Pierce Brosnan’s collar in Tomorrow Never Dies, and the new ‘1962’ cocktail cuff that Turnbull & Asser recently developed based on the one that Connery wore in the Bond films. More on this shirt will be coming at a later date.

The grey tie with a grey jacket and trousers was inspired by how Bond wears grey ties with his grey suits with grey ties in For Your Eyes Only, Skyfall and Spectre. This grey tie in particular is a bespoke grey grenadine from Sam Hober. The grenadine tie is a Connery Bond staple and is a staple of my wardrobe with over 30 examples. Bond wears a grey grenadine tie such as this in For Your Eyes Only and Never Say Never Again, though I only had the former film in mind when I got the tie. The tie is untipped, like in the early Connery films.

With a grey tie and trousers, a jacket that reads as grey, and a white shirt, the outfit looks monochromatic. Daniel Craig’s similarly monochromatic and low-contrast suited looks in Skyfall and Spectre were some of my main inspirations here, but Sean Connery’s all-blue outfits in From Russia With Love and You Only Live Twice, and his all-brown outfits in Goldfinger and Thunderball originally turned me on to the single-coloured looks. I particularly like Craig’s low-contrast monochrome looks because they look good on my low-contrast complexion. My colouring is similar to Craig’s.

The traditionalist in me wanted to wear black shoes, as that’s what Bond would have worn and they would have kept the outfit entirely monochrome. But I went with brown footwear because I knew I was going to be outdoors in a park, and I wanted brown boots to dress down the look just a little. The boots are the Crockett & Jones ‘Tetbury’ chukka boot in brown leather, which Daniel Craig wears in black in Skyfall. If I could make a change to this outfit, I think that my tobacco suede chukka boots would have worked even better. Black ‘Tetbury’ chukkas like Daniel Craig’s might have been the best for this outfit. I do not own any black shoes that could have dressed down this outfit in the way I wanted to.

The outfit is finished with a white folded linen pocket square, inspired by Sean Connery’s Bond in Dr. No and From Russia with Love. Daniel Craig’s white pocket squares may have been in the back of my mind as well, but like Connery’s, mine does not match my shirt. 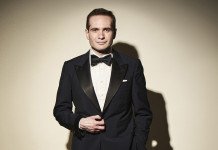 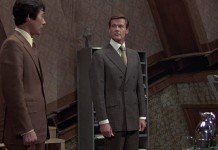