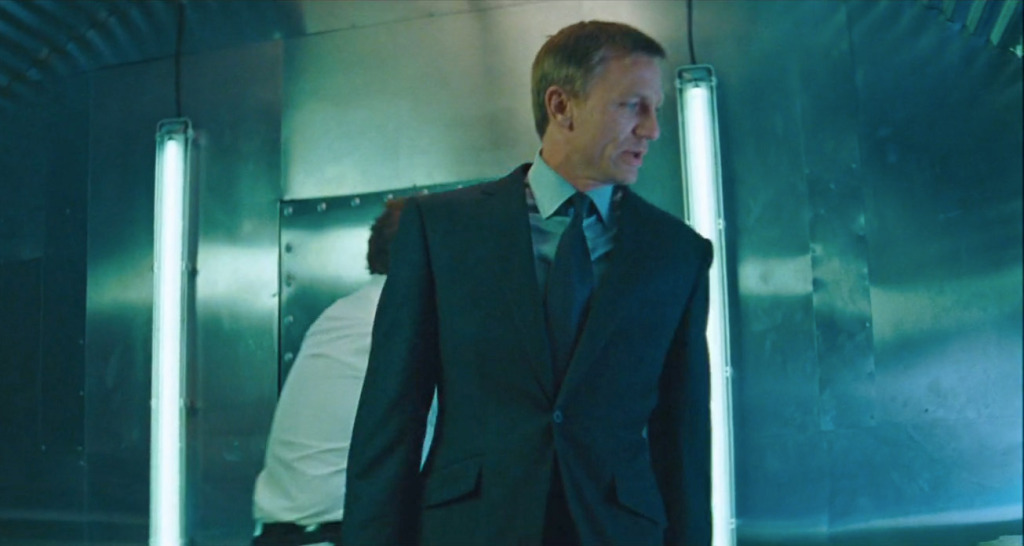 In Daniel Craig’s “screen test” for James Bond, the 2005 film Layer Cake, he wears a ready-to-wear navy suit from Kilgour. The suit was designed by Kilgour’s creative director Carlo Brandelli in his signature style. Brandelli, a London-born fashion designer, interior designer and artist, joined Kilgour in 2004, left in 2009 and returned again in 2013. The style of the suit recalls traditional Savile Row but at the same time updates it with a distinctive sleek, modern look. The suit jacket has single-button front with the button at the waist, and the jacket’s quarters gently cut away below the button. It is cut with a clean chest, a nipped waist and lightly-padded shoulders with roped sleeve heads. The jacket is detailed with a single vent, slanted flap pockets and four buttons on the cuffs. The jacket’s buttons are made of black horn. 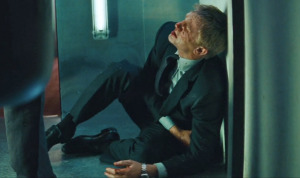 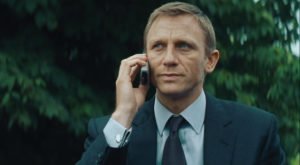 Daniel Craig’s shirt is pale blue and has a moderate spread collar, double cuffs and a front placket.  Though the collar and cuffs are stitched 1/4-inch from the edge, the rather narrow placket is stitched 3/8″ from the edge. The placket is just like what Thomas Pink makes, and this shirt and the others in the film could possibly be from there. If this shirt isn’t from Thomas Pink, it is certainly English in origin. The navy tie has a raised woven honeycomb texture, which looks like the “Astaire” tie that Thomas Pink used to sell. Craig’s shoes are black leather high-vamp slip-ons with an elastic strip across the instep under the tongue.

The entire colour scheme of the outfit is very Bond-like, and all the blue brings out the best in Daniel Craig’s warm, spring complexion and blue eyes. Though the clothes are ready-to-wear, they fit well except for when the jacket’s collar stands away from the neck. Daniel Craig looks great in the English style and proves in Layer Cake that he can look very much the part of James Bond.

In 2011, I wrote about the cream suit Daniel Craig wears in the final scene of Layer Cake.