Aris Kristatos, played by Julian Glover in For Your Eyes Only, keeps wearing a suede trench coat in warm grey. It’s a full-length coat that hits below the knee, but unlike most trench coats which have raglan sleeves, this has set-in sleeves. There are actually ten buttons like would be found on the standard trench coat, and the buttons are grey horn. The coat has the usual trench coat details like a self belt, shoulder straps and angled pockets with buttoned flaps. It has straps around the wrists that close with brass buckles instead of the typical leather. There are yokes across the upper back and upper chest for dryness during snowfall. Most trench coats instead have the yoke only in back and a storm flap in front.  The most noticeable part of this coat is the black fur on the collar and the revers. And for warmth, the coat is lined in black fur. 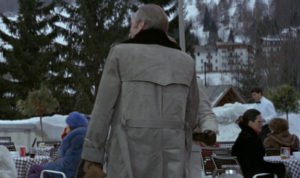 Underneath the trench coat Kristatos wears an olive green double-breasted blazer. It has six white metal buttons with two to fasten. Under the blazer he wears a red cashmere polo neck jumper. The combination of the red jumper and the green blazer hints that Kirstatos is affiliated with the Soviets, something we don’t learn until later in the film. Green and red were often found together on Soviet military uniforms, just with the red limited to accents. We briefly see a little bit of his trousers, which appear to be light grey in a shade similar to the trench coat. Kristatos wears tan leather gloves, most likely lined with cashmere for warmth. Bond, Kristatos and Ferrara all politely remove their gloves to shake hands. Unless the weather is extremely frigid, gloves meant for warmth should be removed for a handshake.