Bond Suits is venturing into womenswear with a dissection of Judi Dench’s M’s suit in Casino Royale. This may not be as exciting an outfit as Ursula Andress’ white bikini in Dr. No or Barbara Bach’s midnight blue dress in The Spy Who Loved Me, though the former in a way would seem appropriate for this blog’s name, considering it is a type of ‘suit’. M’s outfit is more in the spirit of this blog considering that it is tailored.

For the defibrillator scene where M deals remotely with James Bond and when she speaks with Bond over the phone at the end of the film, costume designer Lindy Hemming dressed Judi Dench in a warm grey suit from Armani. Look to the Stars reported that the Dench donated the suit for a charity auction, and Bond Lifestyle reported that the suit sold for $6,000.

The suit is a ‘trouser suit’ or ‘pants suit’ because it includes a jacket and trousers. Women’s suits may be made up of a jacket and trousers, a jacket and skirt, a jacket and dress, or any number of other garment combinations. The colour of the suit looks different depending on the lighting. The lighting inside M’s office is quite warm, so it can make the suit look taupe. When correcting for the colour of light it still looks warmer than true grey, and there’s no fine line between what differentiates warm grey and taupe. It’s a flattering colour on Dench and picks up the warm grey colour of her hair. The fabric has a napped textured weave, possibly a barrathea wave, and it’s likely wool or a wool blend. Synthetic blends are more common in high-end women’s suits than they are in fine menswear.

The jacket has three oversized buttons down the front and fishmouth lapels with a large belly. The cuffs have a short vent without buttons. The shoulders are straight with a lot of padding to make Dench look more powerful, and while the padding is noticeable, it is not overdone. The bottom hem of the jacket is pointed at the front and curves up at the sides like a shirt hem, which hits mid-hip length. Women’s suit jackets are usually shorter than men’s suit jackets to not overwhelm the body and to emphasise the hips.

Women’s tailoring is not held to the same strict confines of men’s tailoring. Men’s tailoring is expected to be well-fitting, crisp and balanced, with as few seams as possible. While there are a few accepted variations on how the front of a man’s tailored jacket is darted—or not darted—seams and darts are not used on men’s suits for the purpose of decoration. There’s ultimately no practical reason why they can’t be, but the tradition is for men’s suits to look simple and for the cloth to be the main focus rather than the cut.

For women, a tailored jacket can have more seams, and there are no rules as to how many seams there should be or where the seams should go. This makes for more variation in women’s jackets, and it makes the jackets look more decorative. Dench’s jacket has a seam down the middle of each side of the front, with two horizontal waist seams. Most of the edges, seams and darts have bold decorative stitching approximately 1 cm from the edge or the seam. Since there aren’t any strict ‘rules’ in women’s tailoring like there are in men’s tailoring, it can make it a little more interesting but also more challenging to design.

Women’s bodies are usually shaped differently than men’s bodies, typically with more curves and more variation from person to person. This makes their bodies more difficult to fit, and this is another reason for having more seams and darts in women’s wear than in menswear. Dench’s jacket has many seams on the front to give it a lot of shape.

Unlike with men’s suits, which are common to wear for both dressier work and social purposes, women mainly wear suits only in professional contexts, commonly for office jobs and in the service industry. British tailors also commonly make tailored horseback riding clothes for women. Beyond this, there are women who wear tailoring of all sorts outside of traditional contexts, but that is a topic that goes too far beyond the subject of what M wears for her job.

The styles of women’s suits change with fashion and slightly with the age of the person wearing them, though M’s suit in Casino Royale is fairly timeless and appropriate for women of all ages. What mainly changes with the age of the person wearing the suit in women’s tailoring is the fit. Younger women will often wear more fitted suits than older women, but this is not always the case, and it does not need to be the case.

Under the suit, Dench wears two different black tops. In the earlier scene the top has a low-cut front, and it’s possible a tank top. The sheen suggests a satin material, either of silk or a synthetic. At the end of the film she wears a top with less sheen that has a higher round neck, which provides just enough space for her necklace.

Her shoes are briefly visible from under her desk. They are black calf high-heeled shoes with a closed toe. She is wearing black sheer hosiery.

If you would be interested in reading more about women’s wear on this blog, or if you would like me to stick with menswear, please leave a comment below. Womenswear, at most, would be nothing more than a very occasional topic here. Requests will be considered. I have my wife to thank for teaching me more about womenswear, and maybe for influencing some of my opinions on it. 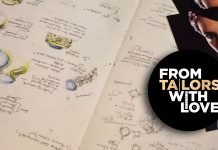 From Tailors with Love: Sophie Harley and the Algerian Love Knot