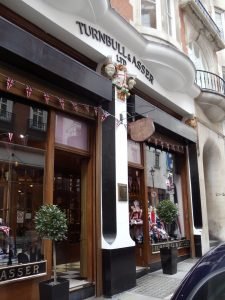 In July I visited the Turnbull & Asser bespoke shop on Bury Street off Jermyn Street. The bespoke shop has been there for about forty years after it was moved from the downstairs of the original Jermyn Street store next door, which has been there since 1903. I spoke with longtime Turnbull & Asser employee and James Bond fan James Cook on his work with Lindy Hemming as well as his opinions on what a well-fitted shirt is and why men should care about their appearance.

Matt Spaiser: How long have you been with Turnbull & Asser

JC: So I started in ready-to-wear and then basically looked after the ties there. Turnbull & Asser is all hands on, everyone gets involved. So with that, and then came into bespoke and went to New York two years and then came back again to London. And to Japan and Europe. Turnbull & Asser is very much, as I said, hands on so everyone gets involved in everything.

MS: What do you do in bespoke?

JC: Set up customers, just look after the clientele, really. We don’t really have titles at Turnbull & Asser. I take out the rubbish at night but also serve customers.

MS: On to the Bond films, what kind of role did you have?

JC: Lindy Hemming, who was the costume designer for quite a few of the films, as I was getting older being more involved they asked me to help for assistance for purchasing items for the film. So basically all the bad people in the film Die Another Day, I was helping get the clothing. Lindy Hemming and the film, they know what they want to go for, and then we have to find the pieces. So I was assisting—that’s how Lindy Hemming asked my managing director can I go to Pinewood to see the film being made. She knew I was interested in James Bond. And I got to be in the film as an extra.

MS: That’s great. So do you know much about the history of James Bond and Turnbull & Asser?

JC: Terence Young, he was the first director, was a customer. He was in the Irish Guards. And actually Cubby Broccoli and Saltzman, they also became customers. But Terence Young, because he was a customer at Turnbull & Asser anyway,…and people like David Niven and Terence Young used to have that cuff [2-button turnback cuff], so they introduced it to Sean Connery for the first film, Dr. No.

So all the villains have shirts made by Turnbull & Asser and we’ve done the ties as well. But now, at Turnbull & Asser we always charge for everything we do. We don’t give away things for free—In this modern world of giving freebies, promotion. Since Lindy Hemming has stopped doing the costumes, they’ve gone to other companies.

But some say Ian Fleming may have been a customer. We’re not truly sure because we never kept an archive years ago. It never seemed that important. Obviously today people like to know all the history. I imagine he was. He was based in this area, so I wouldn’t be surprised.

MS: What to you is a well-fitting shirt?

JC: To me a well-fitting shirt is a shirt that basically feels comfortable, look clean, has a good collar. It just has to fit over the body. I don’t think it needs to be super tight, I just think it should be comfortable. That’s when you know it’s comfortable, when you’re not thinking about it. To me that’s a well-fitting shirt. But James Bond, he always wears his jacket since he is a gentleman. Years ago a gentleman would never take off his suit and tie. In today’s world it has come and gone, but a man would always look well dressed. That’s why I think men like James Bond, because he’s elegantly dressed. He can mix with all types of people.

MS: With an off-the-peg shirt, should people get them altered?

JC: If you’re lucky to fit into a ready-to-wear shirt, the it’s fine. But it’s worth altering a jacket, to waist the jacket. Nothing should be too tight and uncomfortable, but everyone should pay attention to their appearance. It shows discipline. To make yourself look a bit sharper it speaks volumes. Ian Fleming was in the navy, and even as a civilian he would be a bit more formal and smart because it’s that self-discipline. It’s having respect for yourself. 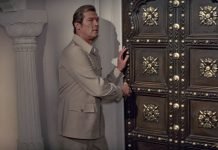