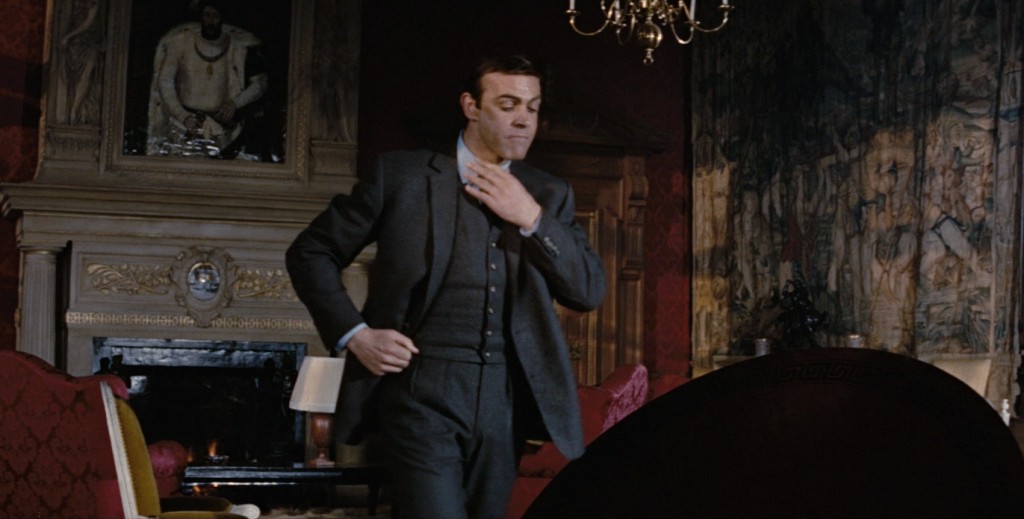 The inclusion of a matching waistcoat (vest) along with the jacket and trousers is what makes a suit a three-piece suit. Bond usually wears a traditional waistcoat that has six buttons and a small cutaway at the bottom. Sometimes the bottom button is on the cutaway, but even if it is not, Bond does not fasten the bottom button. The bottom button on a waistcoat is never fastened out of tradition, but it is also never fastened to allow the bottom of the waistcoat needs to spread apart when seated. In Thunderball (pictured top) the waistcoats are cut straight across the bottom, and all buttons are meant to fasten. The straight-bottomed waistcoats look a little like sleeveless cardigans and are thus slightly less formal. Bond has occasionally worn waistcoats with five buttons or seven buttons, and in Goldfinger and The World Is Not Enough, the waistcoats have notched lapels. Bond’s waistcoats typically have four welt pocked on the front, and the back of the waistcoat is made in the same material as the jacket’s lining.

For mourning the death of his “brother” in Diamonds Are Forever, Bond wears a black three-piece suit. Today people may consider a three-piece suit too flashy for a funeral, even in somber solid black. Bond also wears two sporty three-piece suits outside of London for non-business occasions: the grey glen check suit in Goldfinger and the brown tweed suit in On Her Majesty’s Secret Service.

The last time Bond wore a three-piece suit was at Lake Como in Casino Royale. Considering the location, the navy pinstripe suit that Bond wears is out of place. A solid navy or grey two-piece suit would have been better since the three-piece is too serious and pinstripes suggest the office. Though Bond is often overdressed, he is overdressed more than usual in this scene. However, the three-piece suit in Casino Royale signifies that Bond has completed his first mission and is now the more suave and mature James Bond we know from the previous twenty films.

How to wear a three-piece suit

Wearing a three-piece suit has a few difference to wearing a two-piece suit. It allows the jacket to be worn open and still look just as presentable as it does with it closed. If you remove your suit jacket at your desk like Bond does in On Her Majesty’s Secret Service, you will look more dressed with a waistcoat. The waistcoat, however, cannot replace the suit jacket for any occasions a suit is required.

The correct proportions and fit are more important with three-piece suits than they are with two-piece suits because they have a waistcoat to tie the pieces all together. It is important that the waistcoat and trousers work together to prevent the shirt from showing between the bottom of the waistcoat and the top of the trousers. The waistcoat needs to cover the the trousers’ waistband. The problem with wearing a waistcoat with modern low-rise trousers is that the waistcoat has to be very long. When the waistcoat is too long it cannot conform to the body as well, which makes the body look heavier when the jacket is removed. A long waistcoat also makes the torso look larger overall, which is not flattering. A waistcoat that is too long will also be uncomfortable to sit in. Wearing trousers with a traditional rise is the only proper way to wear a three-piece suit so the suit as a whole can fit and move with the body in the best way possible.

Three-piece suits should never be worn with belts since they leave a lump under the waistcoat. Roger Moore, Pierce Brosnan and Daniel Craig wear three-piece suits with belts in their Bond films, as opposed to Sean Connery and George Lazenby who wear suit trousers with side adjusters. Ralph Fiennes’ Gareth Mallory in Skyfall wears his three-piece suits with braces, which are the best option for trouser support when wearing a waistcoat. Braces are the only sure way to prevent the trousers from sagging and revealing the shirt below the waistcoat. And if you don’t want anyone to know you are wearing braces, the waistcoat keeps them perfectly hidden. I am surprised that the films have not—or at least not from what can be seen—put Bond in braces when wearing a three-piece suit. The trousers often slip down in action to reveal a sliver of the shirt. This could have been avoided with braces, and nobody would ever know or think that Bond is wearing braces when they are hidden under a waistcoat.