James Bond celebrates Christmas in On Her Majesty’s Secret Service at the mountaintop villain lair of Piz Gloria in disguise as Sir Hilary Bray of the College of Arms. For Christmas dinner he wears Scottish Highland dress, an alternative for black tie. If he were to wear his famous dinner suit on this occasion, Bond would most certainly give himself away. Thus we see James Bond for the one and only time in a kilt.

George Lazenby does not look the part of James Bond in this kilt and lace jabot, and for this he has historically lost points with the fans. He also does not sound like James Bond when wearing this kilt because he is dubbed by George Baker, the actor who plays Sir Hilary Bray in the flesh. James Bond’s eccentric disguises have rarely been well-received, with the worst of the lot being Roger Moore’s clown suit in Octopussy. However, James Bond’s Scottish ancestry certainly gives him the right to wear a kilt, even if he weren’t in disguise.

Bond’s jacket is a black Prince Charlie coatee, which is a variation on the double-breasted evening tailcoat. The jacket is made of heavy wool with soft shoulders and slightly roped sleeve heads. It is waist-length in the front but has very short tails in the back that cover the seat. The buttons are shanked silver squares arranged with the points up and down, left and right. There are three buttons on the left and right front panels and three large buttons spaced out on each sleeve. There are also four buttons on each tail in the rear. The peaked lapels are black satin-silk-faced.

The jacket fits very well and is likely to be made bespoke, either by Lazenby’s tailor Dimi Major of Fulham (though they don’t have a record of it) or by a costumer. 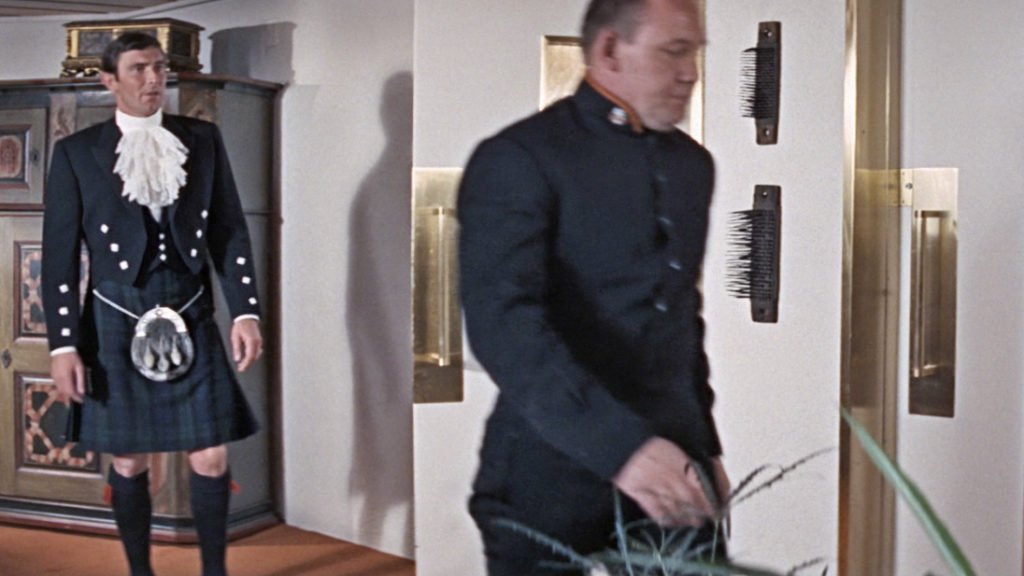 The black wool waistcoat is the low-cut evening style that matches the same style worn with black tie, but it has three closely spaced silver buttons that match the style on the coat but in a smaller size. It has rounded shawl lapels. The waistcoat is short in length and sits higher than the bottom of the front of the jacket.

Though every part of this outfit is exclusive to Highland dress, it is the kilt that stands out the most. Though it is entirely appropriate here, it is not something we’re used to seeing Bond wearing. The kilt is in the Black Watch tartan, also know as “the Government sett”. It is a dark blue, green and black plaid from the Royal Regiment of Scotland. It is a military tartan, but it also a tartan that those without their own are allowed to wear. This makes it a very commonplace tartan and it is commonly sold by ready-to-wear shops that do not specialise in Scottish clothing. It is often used for dinner jackets or dress trousers. A few Scottish clans have adopted this tartan, and it may also be known as the Campbell, Grant Hunting, Munro Hunting and others.

The white shirt made by Frank Foster has a tall banded collar that closes at the back, a front placket, a darted back and rounded single-button cuffs. Around the collar, Bond wears a form of white lace neckwear called the jabot. The shirt and jabot belong to the white tie equivalent of Highland dress, while the Prince Charlie coatee belongs to the black tie equivalent and is more typically paired with a black bow tie. Compared to a black bow tie, the jabot gives this outfit a more costume-like look and was also trendy at the time.

Bond’s argyle kilt hose are over-the-calf height and folded down at the top. They match the kilt’s Black Watch tartan. Hanging down on a chain in front of Bond’s groin is a dress sporran. Sporran, the Gaelic name for purse, serves to make up for the kilt’s lack of pockets. Bond’s full-dress sporran is made of taupe-coloured fur and has three fur tassels hanging on the front. It closes with a large ornate silver clasp at the top. The shoes are black leather buckle brogues with leather soles, and they are a traditional shoe for Highland dress.

Happy Christmas to all of my readers and thank you for visiting. 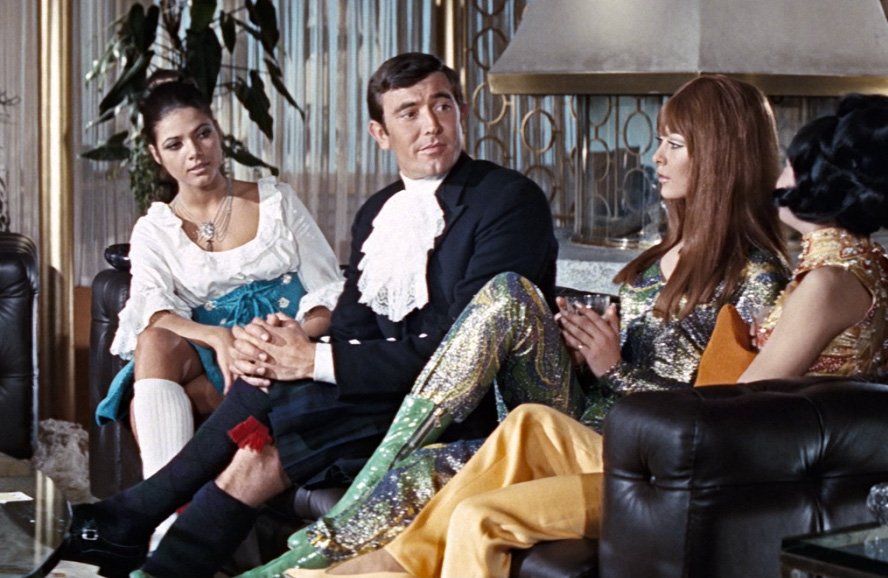