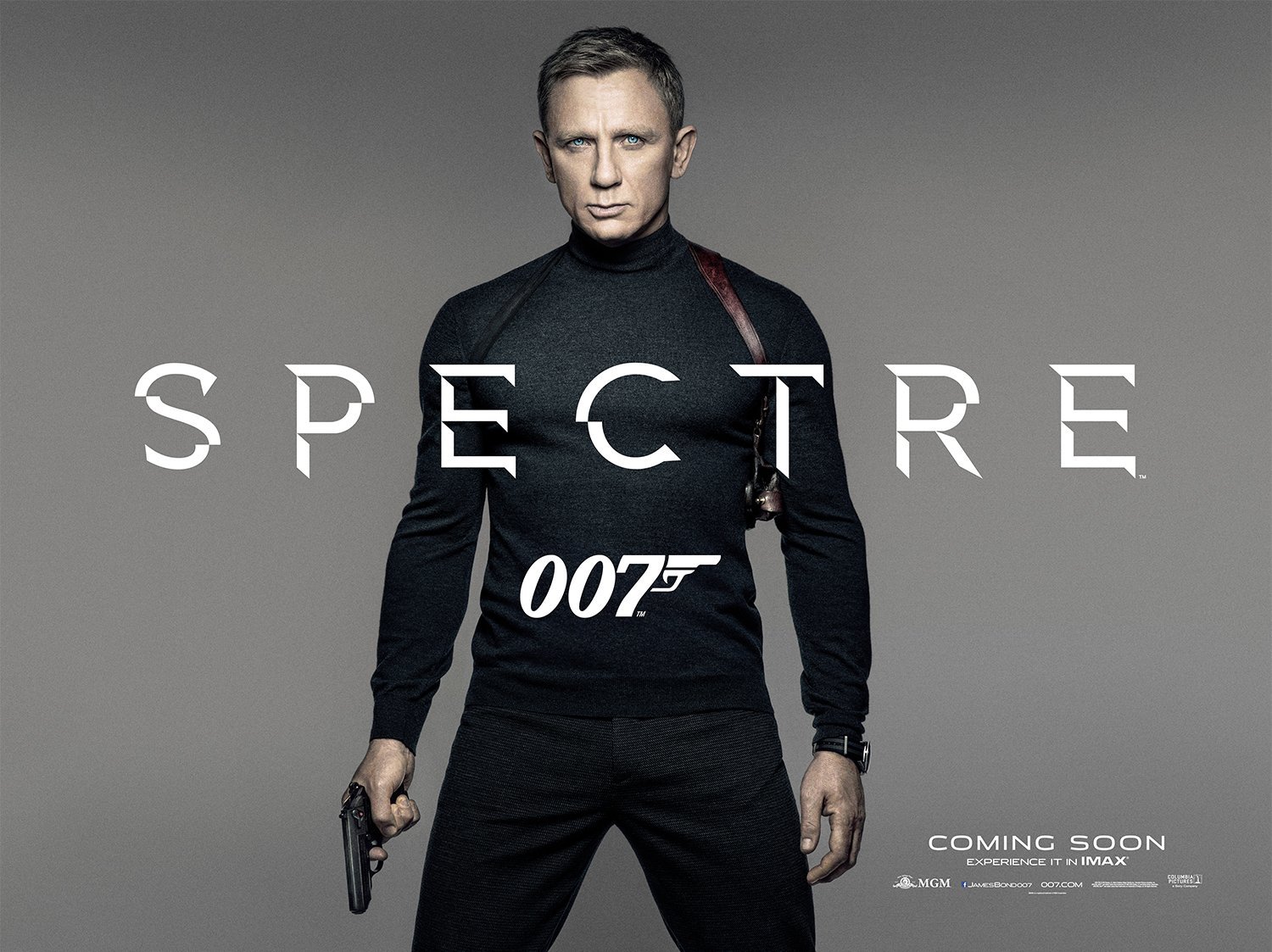 If Daniel Craig’s fashion sense is anything to go on, the turtleneck has boldly returned. Craig had the power to return shawl collar cardigans to the forefront of fashion after wearing them as James Bond in Casino Royale and Quantum of Solace, and he will no doubt do the same for the turtleneck after wearing three in Spectre. 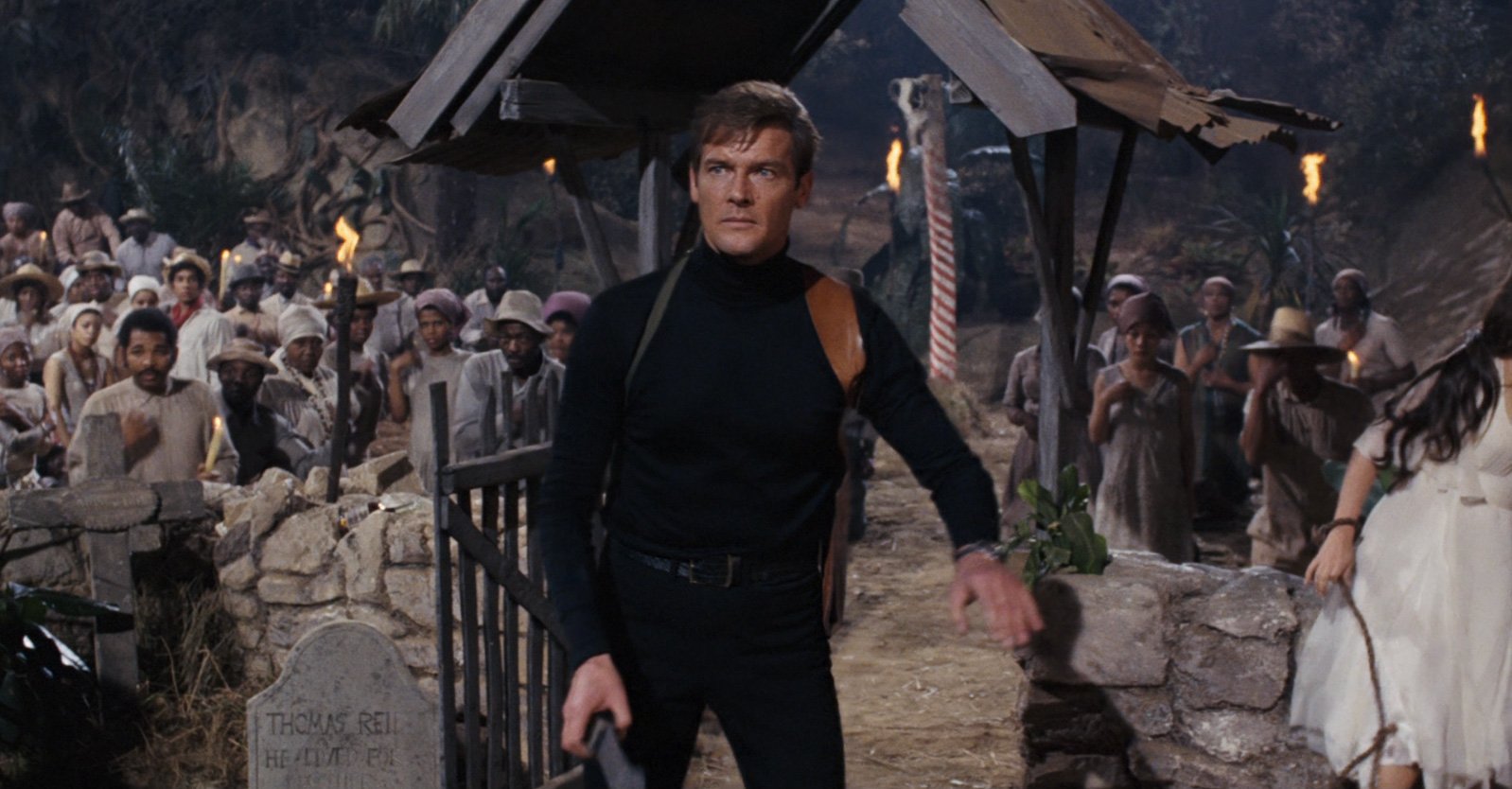 Daniel Craig wears a dark charcoal grey fine gauge mock turtleneck made of cashmere and silk from British company N.Peal on the teaser poster for Spectre with charcoal tick-patterned trousers and a shoulder holster. This look immediately recalls the 1973 film Live and Let Die, in which Roger Moore wears a black full turtleneck with black trousers and shoulder holster. Craig’s dark grey version better flatters his fair complexion and adds more subtle interest in updating the look. In the film, Craig will be wearing a dark blue-grey suede Racer Jacket from John Varvatos over the mock turtleneck to conceal his gun.

Both Daniel Craig in Spectre and Roger Moore in Live and Let Die were inspired to wear this look after Steve McQueen famously wore a dark blue turtleneck sweater with a shoulder holster as police lieutenant Frank Bullitt in the 1968 film Bullitt. This look is only seen briefly at the end of the film since he is usually wearing a brown herringbone, elbow-patched tweed jacket to hide his gun and holster. Bullitt‘s poster and publicity stills, which are without the jacket, are what made the look so iconic. Not only does Daniel Craig copy McQueen’s turtleneck and shoulder holster look in Spectre, but he also wears the same brown suede Sanders & Sanders “Playboy” chukka boots that McQueen wears in Bullitt.

Before Steve McQueen wore the turtleneck and holster in Bullitt, it was a popular look for agents in the television series The Man from U.N.C.L.E. Robert Vaughn first wore this look as Napoleon Solo in the 1965 episode “The Four-Steps Affair”, but David McCallum’s character Illya Kuryakin is more famous for the look and first wore it in the following episode “The See-Paris-and-Die Affair”.

Besides the charcoal grey mock turtleneck, Daniel Craig wears another mock turtleneck in Spectre under a dark grey nylon-front knitted wool blouson from Tom Ford while on his mission in snowy Austria. This example, which is also from N.Peal, is identical to the dark charcoal grey piece, except it is made in a vivid medium shade of blue called “Lapis Blue”.

Daniel Craig wears a third turtleneck in Spectre from N.Peal in a colour they call “Fumo Grey”, which is a light and warm shade of grey. This turtleneck is the more traditional full roll-neck style and is designed for warmth. It is cable-knitted and in a heavier Mongolian cashmere. Craig wears it under a heavy navy wool zip-front blouson in the Austrian Alps.

Spectre and Live and Let Die are not the only two James Bond films to feature turtlenecks. Sean Connery introduced the mock turtleneck to the Bond in the 1967 film You Only Live Twice when he wears a grey top to infiltrate the SPECTRE volcano headquarters. Sean Connery wears full turtlenecks in Diamond Are Forever with his brown tweed jackets. In On Her Majesty’s Secret Service, George Lazenby wears orange and white turtlenecks as part of his golf and ski outfits, respectively.

Roger Moore undoubtedly holds the status as the turtleneck James Bond. In The Spy Who Loved Me he wears a navy turtleneck as part of his naval battle dress, and in Moonraker he wears a cream turtleneck under a double-breasted navy blazer. The 1981 Bond film For Your Eyes Only is tied with Spectre for featuring the most turtlenecks. In this film, Moore wears his turtlenecks under a shearling blouson and a ski jacket in the Italian Alps as well as under a lightweight blouson in Greece. Until Spectre, Die Another Day was the last Bond film to feature a turtleneck. Pierce Brosnan wears a heavy cashmere cable-knit mock turtleneck from the Scottish company Ballantyne, now liquidated, in the 2002 film.

This article was originally published in 20 Minuten.