Chantilly in northern France isn’t the most appropriate place for an ivory dinner jacket, even in summertime. The French Riviera is a more traditional place to wear the ivory dinner jacket in France. This scene takes place in late June, not long after the Royal Ascot, which means the sunset is very late. At the summer solstice, the sun sets at 9:59 pm, meaning there is plenty of daylight at 6 pm when this event starts. Bond is not wearing his dinner jacket in the afternoon, though it was likely filmed then.

Otherwise, this is primarily an ivory dinner jacket, with its button one front and jetted pockets. It also has four-button cuffs—as opposed to the usual three buttons that Douglas Hayward uses—and double vents. The shoulders are soft on the natural shoulder line and have roped sleeve heads. The cut is slightly draped with a nipped waist. The extra drape on this jacket that usually isn’t present on Hayward jackets is probably because silk doesn’t have as much give as wool has and thus needs extra room for movement. 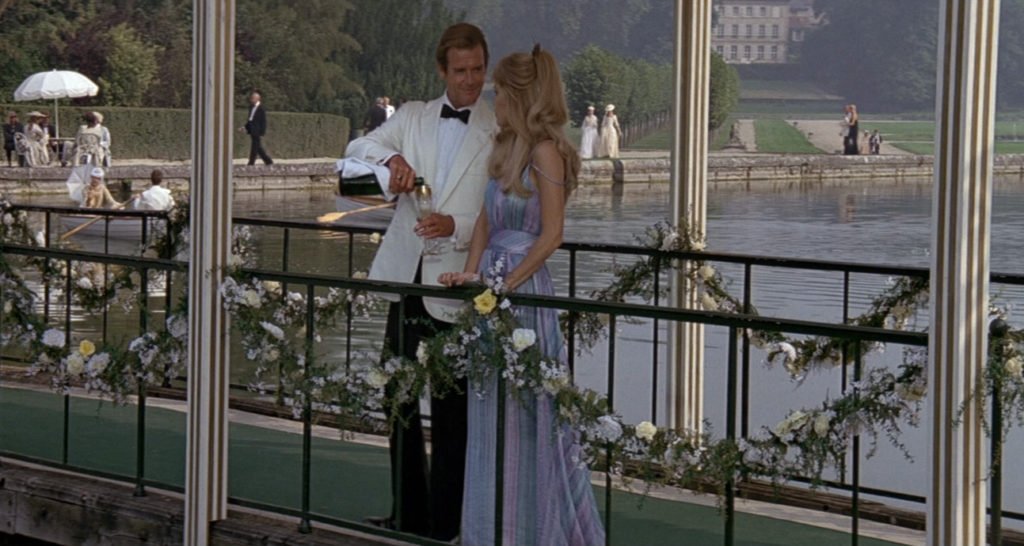 The Douglas Hayward straight-leg trousers are black with a satin stripe down each leg, and the black thistle-shaped bow tie is in matching satin silk. Bond’s white cotton voile dress shirt made by Frank Foster has a spread collar, double cuffs, a pleated front with five pleats on each side of the placket and mother of pearl buttons down the placket. Bond’s shoes are black patent leather slip-ons with a cap-toe and a black grosgrain strap over the vamp. The shoes are likely to be from Salvatore Ferragamo.

Bond also briefly wears a pair of round translucent brown tortoise shell sunglasses with a keyhole, which have the ability to see through tinted glass). Does anyone know the origin of these sunglasses?

Though Bond is undercover as James St. John Smythe, this is certainly an outfit equally as appropriate for the Bond character.