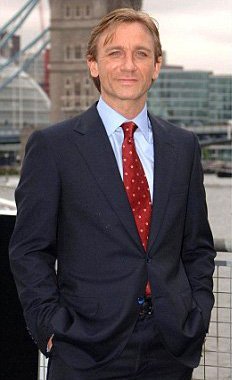 Daniel Craig was announced as the new James Bond in Casino Royale at a lavish press conference on 14 October 2005, which was coincidentally Roger Moore’s 78th birthday. For this event Daniel Craig wore a Brioni suit, which at the time was a well-recognised part of James Bond’s image. Though his suit was reported by People to be “charcoal grey,” the suit looks more like charcoal blue, if not navy. The colour, whatever it actually is, was the right choice. Blue is Daniel Craig’s best colour and is the classic Bond colour as well, at far as Fleming is concerned. The suit has a button two jacket cut with Brioni’s usual straight, padded shoulders and roped sleeve heads, and it has medium-width lapels, flapped pockets and double vents. The trousers have a flat front and a slight taper to the leg with a plain hem. This suit is as evenly balanced as a suit can be and will never look outdated. It’s most likely a ready-to-wear suit, judging by the less than perfect fit. Whilst there aren’t any significant fit problems, the jacket could use a little more shaping.

Craig’s sky blue shirt has a spread collar and double cuffs. His red tie has a pattern of fancy yellow and purple spots, and it is tied in a four-in-hand knot. With the suit he wears a black belt and black derby shoes. Since Daniel Craig and Casino Royale were on their way to taking James Bond back to his roots, this rather unremarkable outfit looks appropriately less luxurious than Brosnan’s Brioni suits that came before. The first-rate quality, however, is still present. These clothes don’t draw attention to themselves, good or bad, but at the same time Bond’s clothing should be a little more interesting. And indeed a little more interesting the clothing was in Casino Royale.