“Bond had equipped himself at Lillywhites with clothing he thought would be both appropriate and sensible. He had avoided the modern elasticized vorlage trousers and had chosen the more comfortable but old-fashioned type of ski-trouser in a smooth cloth. Above these he wore an aged black wind-cheater that he used for golf, over his usual white sea-island cotton shirt. He had wisely reinforced this outfit with long and ugly cotton and wool pants and vests. He had conspicuously brand-new ski-boots with powerful ankle-straps. He said, ‘Then I’d better take off my sweater.'” (Chapter 11)

“Then he had a quick shower, complicated by having to keep his dressings dry, changed out of his stinking ski clothes into the warmer of the two dark-blue suits he had brought with him, sat down at the writing-desk, and jotted down the headings of what he would have to put on the teleprinter to M. Then he put on his dark-blue raincoat and went down into the street and along to the Odeons Platz.” (Chapter 26)

Like in the film, Bond dresses as Sir Hilary Bray in the novel:

“‘You’ve fixed your laundry tags and so on?’ ‘Yes,’ said Bond dully. ‘I’ve fixed all that. And I’ve got two new suits with cuffs and double vents at the back and four buttons down the front. Also a gold watch and chain with the Bray seal. Quite the little baronet.'” (Chapter 8)

The details listed would suggest that Bond’s regular suits do not have cuffs, double vents or four buttons down the front. Since Fleming was English, “cuffs” would most likely refer to turnback cuffs on the sleeves (which Fleming occasionally wore himself) rather than trousers’ turn-ups. Double vents on single-breasted jackets hadn’t yet become the standard for English tailoring, and even though Sean Connery had already worn double-vented suits in Dr. No a year earlier it probably was not to Fleming’s personal taste. At that time it was still more common for single-breasted jackets to have a single vent or no vent. four-button fronts would come into fashion later in the decade, but at this time they may still have been seen as old-fashioned and were most appropriate for country suits. Bond’s usual suits probably have a two-button front like Fleming’s did. 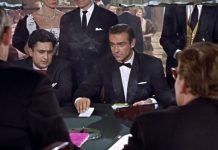 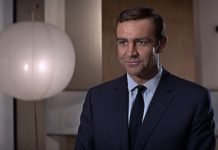