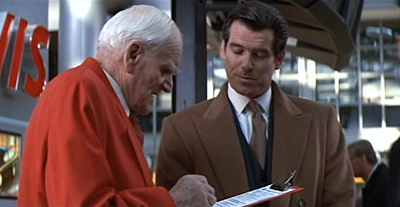 James Bond’s choice of bronze and blue tie made sense after he donned a fawn-coloured cashmere overcoat over his blue birdseye suit for his arrival in Hamburg, Germany in Tomorrow Never Dies. The overcoat is more than just an afterthought. Typically one doesn’t coordinate his overcoat with the tie, but costume designer Lindy Hemming saw the overcoat as an integral part of the outfit. The full-length coat is tailored by Brioni with softly-padded shoulders and a full cut through the body.

The double-breasted coat has six buttons on the front in a button two, show three configuration. The button two style of the coat is more formal than one that buttons to the top, and the button stance is very low to match the low stance of the suit jacket, while it helps to show off more of the suit. The lapels are peaked with a buttonhole in each, the pockets are straight with flaps, and the cuffs have four buttons. 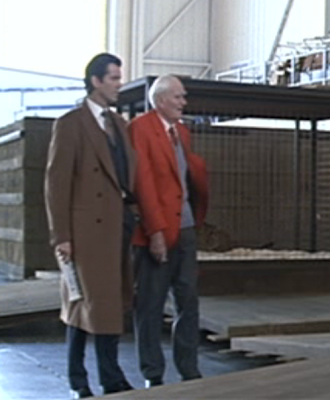