In between Live and Let Die and The Man with the Golden Gun, Roger Moore starred in a movie called Gold. It’s very similar to a few Bond films, like a cross between Goldfinger and A View to a Kill, and it’s directed by On Her Majesty’s Secret Service director Peter Hunt. Moore dresses in a variety of outfits, but one of the best is a light navy double-breasted suit. This versatile suit takes Moore from a daytime social event to a night out. It’s the perfect suit for when you’re invited to an event that specified “cocktail attire” as the dress code.

The suit jacket is similar to that on the double-breasted suits that Conduit Street tailor Cyril Castle made for Moore’s first two Bond films, and Live and Let Die and The Man with the Golden Gun. It has softly-padded shoulders, a swelled chest and a nipped waist. It has six buttons with two to button like the standard double-breasted jacket, and the peak lapels are fairly timeless in their width. It is detailed with slanted pockets, deep double vents and flared link cuffs. The trousers have a darted front with a slightly flared leg. 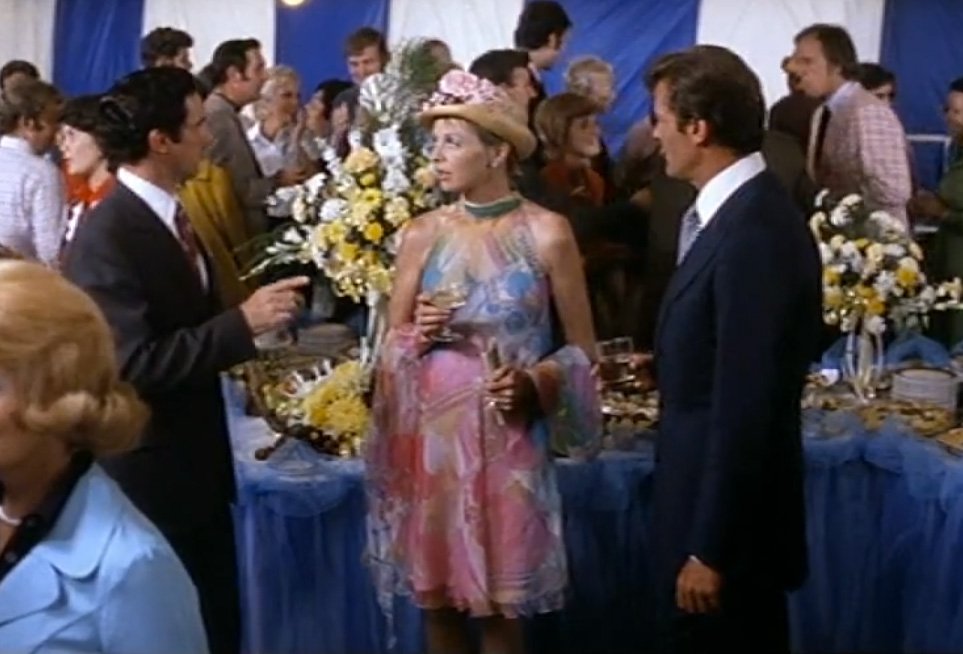 Moore dresses up the suit with a white cotton voile shirt made by Frank Foster. It’s in a similar style to the shirts in Live and Let Die shirts, with a large spread collar, placket and the same type of two-button cocktail cuffs from Live and Let Die. The tie is a large white neat pattern on a blue ground, tied with a four-in-hand knot. The shoes are black. Overall, the outfit is quite restrained for Moore’s tastes—especially compared to some of the other outfits in the film—and is something that would have been very appropriate for Bond in the 1970s.