On this week’s podcast Pete interviews legendary clothing designer Mark Powell, who runs a famous tailoring shop in Soho, London. Powell talks about his younger days amongst James Bond tailors on Conduit Street, his place in the tailoring and fashion world, dressing stars and gangsters, and his favourite Bonds. Powell worked with Bond costume designer Jany Temime on the film Gangster No. 1.

I talk about the upcoming James Bond exhibit at Spyscape in New York, which opens the 8th of March. Pete tells us about a John Williams concert he attended, where he learned that John Williams was in talks to score Bond in the Roger Moore era but instead did Indiana Jones. Imagine if Williams scored For Your Eyes Only instead of Bill Conti?

There is a beautiful dinner suit for sale from the 1967 James Bond spoof Casino Royale. The suit belonged to Peter Sellers and he wore it in the casino scene where he plays against Orson Welles’ Le Chiffre. Even though Peter Sellers is not really playing James Bond and this is not a proper James Bond film, this is a proper James Bond Tuxedo. The suit was made by Major Hayward, a firm made up of Dimi Major and Douglas Hayward, two tailors who would later work on the official Bond films. Major tailored George Lazenby and Hayward tailored Roger Moore in his later years as Bond. Because I have not seen this suit in person, I cannot confirm if it is black or a very dark midnight blue, though on film it looks midnight blue. If you are interested purchasing in the suit, please contact Matt. You can find photos of the suit for sale below:

You can download the podcast from iTunes or Stitcher, or you can listen at the top of the page. You can also watch us discuss Peter Sellers’ dinner suit on YouTube below. Please subscribe to The Suits of James Bond YouTube channel!

You can find more notes on the podcast at Human Research. You can also follow the From Tailors with Love Twitter feed, run by Pete. If you have a question you’d like answered on the podcast, send us your questions through our listener mail form. 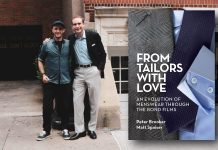 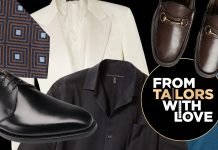 From Tailors with Love: What Bond Brands Mean to Us