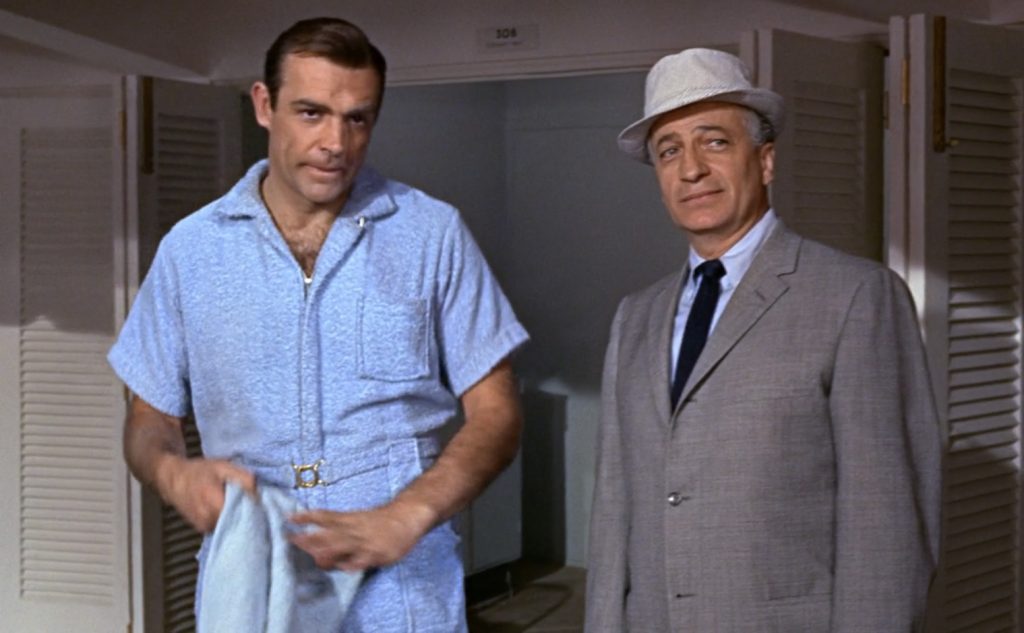 The Americans’ traditional “Ivy League” style saw it’s peak in the 1950s and early 1960s and was popular amongst people from college students to older gentlemen to presidents. It’s only fitting that CIA agent Felix Leiter would dress this way. In Goldfinger, Cec Linder plays an older, less cool Leiter compared to Jack Lord’s Leiter, who is closer to an American Bond. Linder, who is actually Canadian, wears the classic American Brooks Brothers sack suit. This suit most resembles the Brooks Brothers model, though J. Press and Chipp are other makers who were famous for the sack suit. The most significant difference to the British lounge suit, and most suits sold anywhere today, is the lack of a front dart. That dart is the vertical seam down each side on the front that gives the waist shape in the front. Because of the lack of this seam the sack suit ends up fairly boxy, but a curved natural shoulder line humanises the suit’s boxy silhouette. The side darts and rear side seams still give the jacket a little shape, but that doesn’t translate to the front so much. 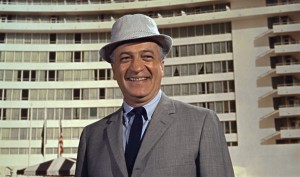 Felix Leiter’s suit is light grey lightweight wool, either in sharkskin or in a very subtle Prince of Wales check with a subtle white windowpane The front of the jacket is a button 2 show 1—3 buttons total—since the lapel rolls to the middle button. The jacket has a single vent, flapped pockets and 2 buttons spaced apart on the sleeves. The trousers have a flat front and turn-ups, hemmed a bit short. Leiter wears a traditional American shirt, a light blue pinpoint oxford with a button-down collar and buttons cuffs. The American button-down collar has long points with the buttons placed higher than where the points would naturally lay so the collar rolls over. It’s a much more casual look than the English spread collar that meshes well with the more relaxed sack suit. The tie is the same that Connery wears later in the movie, a navy knitted tie. Leiter’s tie is lighter in colour and has a seam down the back that shows through on the front. Only a tiny bit of the shoes can be seen, but later in the film Leiter wears black oxfords. The shoes with this suit are probably the same style, but they may be burgundy instead. Linder also wears a cotton hat made of a blue and white seersucker. The hat has a short brim and two air vents on each side. 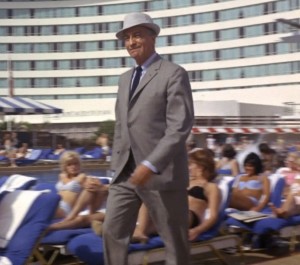 The colours Leiter wears may be the same as Bond’s, but the styles are an ocean apart.