Bond’s quintessential uniform, the dinner jacket, was his first garment in the first Bond film Dr. No. Sean Connery wears a midnight blue shawl collar dinner suit, and Daniel Craig is continuing the tradition with a very similar dinner suit in No Time to Die. The dinner jacket, made by Anthony Sinclair, has silk satin facings, one button on the front and silk gauntlet cuffs.

He accessorises it with a pleated cotton voile shirt from Lanvin that has mother-of-pearl buttons down the front and a diamond batwing bow tie. He breaks tradition and wears neither a waistcoat nor a cummerbund, a choice Bond would follow for most of the film series until recently.

Goldfinger introduces the white—more accurately off-white, ivory or ecru—dinner jacket to Bond. This one, by Anthony Sinclair, with self-faced peaked lapels and mother-of-pearl buttons set a standard that most of Bond’s subsequent white dinner jackets would follow. Revealing this jacket from from inside a wetsuit attached a memorable moment to the Goldfinger dinner jacket, and the bright red carnation boutonniere in the lapel buttonhole gives the outfit an even more striking look.

Connery accessorises this dinner jacket with a white-on-white-striped shirt with a pleated front from Frank Foster and a slim batwing bow tie.

Goldfinger also introduces Bond to the notched-lapel dinner suit, something Bond would often wear for low-key black tie affairs. Many traditionalists don’t condone notched lapels on dinner jackets because they don’t look distinct from the typical lounge suit and are commonly used on dinner jackets to save the manufacturer money, but the style goes back to the Edwardian era. Bespoke tailor Anthony Sinclair did not use notched lapels to sacrifice money or style on Sean Connery’s midnight blue dinner jacket.

Connery accessorises this dinner jacket with a white-on-white-striped shirt with a pleated front from Frank Foster and a slim batwing bow tie.

On Her Majesty’s Secret Service features Bond’s first single-breasted peaked-lapel dinner suit, which would become a mainstay of the Brosnan Bond’s wardrobe decades later. This suit by Dimi Major is made in a classic midnight blue wool with satin silk facings.

While the dinner suit is classically elegant, the shirts he wears with it draw more attention. Frank Foster made two frilly ruffled shirts characteristic of the late 1960s trends for George Lazenby to wear with this dinner suit. Even when Bond wears something trendy with his dinner jacket, he keeps the look mostly classic.

Bond wears it with a blue silk shirt from Turnbull & Asser and a butterfly bow tie. It’s a fitting outfit for such a flashy film.

Roger Moore introduced the double-breasted dinner jacket to James Bond in promotional stills for his first Bond film Live and Let Die, but for his third Bond film The Spy Who Loved Me he wears an iconic double-breasted midnight blue wool and mohair dinner suit. Though not ideal for drawing his shoulder-holstered PPK, Moore looks elegant in this dinner suit made by Angelo Roma with silk satin peaked lapels and no vents in the rear. The jacket stands the test of time, though the trousers look dated with their wide flares.

Though Bond first wears a three-piece suit in GoldenEye, he pulls out all the stops with his 1930s-inspired dinner suit in Tomorrow Never Dies. This Brioni dinner suit is made of midnight blue wool barrathea with wide peaked lapels faced in silk grosgrain and features a unique five-button double-breasted waistcoat with the buttons in a V-formation. It follows tradition unlike any other of Bond’s black tie outfits.

The Turnbull & Asser shirt is a more formal and historical style that Bond hadn’t previously worn, with the collar, cuffs and front bib made of cotton marcella. The front of the shirt fastens with mother-of-pearl studs instead of buttons, and the cufflinks match the studs. The bow tie is a wide butterfly shape that harmonises with the wide lapels.

Minimalism has commonly been a theme throughout Bond’s black tie ensembles, with Bond frequently forgoing accessorises like studs and waist-coverings. Casino Royale features his most minimal black tie outfit, which is defined by a minimal dress shirt. The shirt is a white-on-white cotton waffle-weave with a covered placket and no bib. Bond previously wears other minimalist dress shirts in Thunderball and Octopussy, but those show the shirt’s buttons.

The Brioni dinner suit is a plain black wool with facings in matte ribbed silk, which is traditional, simple and does not draw attention. This is the only black dinner suit on this list. As usual he foregoes a waist-covering, and the uncovered waist perfectly follows with this outfit’s minimalist theme. 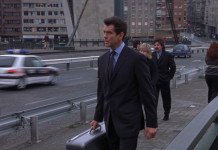