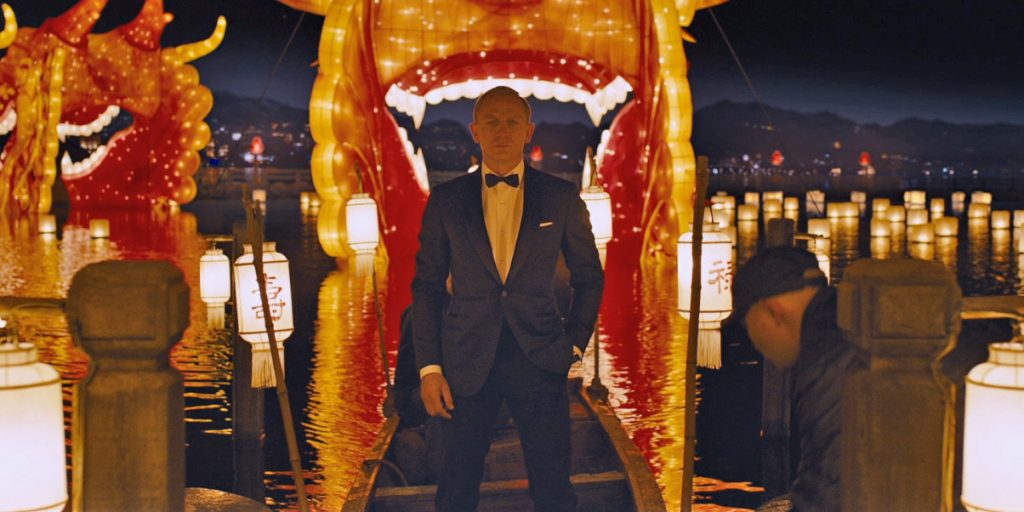 Last week, Daniel Craig celebrated his 50th birthday. With production of his fifth James Bond film approaching in less than a year, it is fun to speculate what his fifth dinner jacket may be. The last time James Bond did not don his iconic dinner jacket in a film was in the 8th Bond film Live and Let Die, so it is almost certain he will attend a black tie function in the 25th James Bond film. Fashion goes in cycles, especially for James Bond, so this may help us predict what Bond will wear next.

Skyfall and Spectre costume designer Jany Temime mentioned to The Bond Experience that after giving it her all for the midnight blue dinner suit in Skyfall, she couldn’t top that and had to go a different route in Spectre:

If Temime returns as costume designer for the next Bond film (which is likely considering he continued relationship with Bond producer Barbara Broccoli on her non-Bond film last year Film Stars Don’t Die in Liverpool), she will likely want to take yet a another approach for Bond’s black tie her third time around. It likely will not be a midnight blue shawl collar dinner jacket or an ivory peaked lapel dinner jacket like she did before. It is unlikely the ivory dinner jacket will reappear anytime soon regardless.

The case for the double-breasted dinner jacket

At the Academy Awards in 2007, Daniel Craig wore a double-breasted dinner jacket from Dunhill, and it looked perfect on him. It is a common misconception that double-breasted jackets are not flattering on shorter men, and it’s a misconception that should not get in the way of the style’s return. If Daniel Craig looks short, it’s only because he is standing next to taller people. Proportions and execution, rather than the overall style, are key to a flattering look.

The likely return of another single-breasted dinner jacket

If the single-breasted dinner jacket returns, we will likely see peaked lapels on a black or midnight blue suit. The basic peaked-lapel dinner jacket that was a staple of the Brosnan years and made waves in Casino Royale has not returned since, so it is about time for its return. Jany Temime has not done this basic style yet, and if she returns as costume designer she may want to give her own take on this modern Bond staple. Daniel Craig wore a black mohair and wool blend single-breasted peaked-lapel dinner jacket for the Spectre premiere, and perhaps a suit similar to this one will appear in Bond 25.

Bond has always worn more dinner jackets in midnight blue than black, but maybe black will return for a change. On the other hand, Jany Temime loves blue on Craig because it brings out his blue eyes, so midnight blue is likely to return in a different form than it appeared in Skyfall.

If a single-breasted dinner jacket returns along with Tom Ford, the cummerbund will likely return as well. The traditional butterfly bow tie will also likely make an appearance again after the less common diamond-point and batwing bow ties featured in the last three films.

The classic Bond dress shirt (Tuxedo shirt) with pleats and exposed buttons returned in Spectre, and perhaps that model will return again. Spectre was the first time since The Living Daylights that Bond wears a dress shirt with exposed buttons, which is the traditional fastening for the soft, pleated shirt and what Bond wears throughout the first 15 films. As black tie has increased in formality, black tie experts have considered studs and fly fronts the most proper styles for dress shirts, whilst buttons are too functional or ordinary. The fly front dress shirt is still trendy, and because it hasn’t been seen on Bond since Casino Royale it may be time for its return.

What kind of dinner jacket do you think we will see or want to see in Bond 25? Could we see multiple dinner jackets in a Bond film again? Leave a comment below.