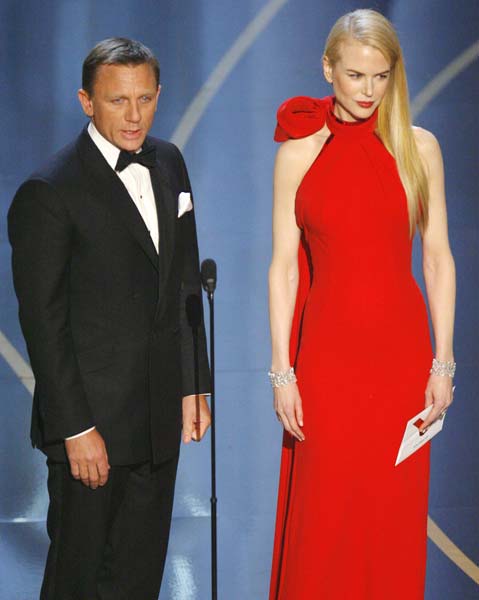 One of Daniel Craig’s nicest pieces of tailored clothing is the dinner suit he wore at the Academy Awards in 2007 after Casino Royale. This suit is bespoke from Alfred Dunhill and designed by Martin Nicholls. If you search for photos of the suit online you’ll find some where the jacket isn’t sitting correctly on him and doesn’t appear to fit so well. But when he gets on stage with Nicole Kidman it is nigh perfect.

The dinner jacket has four buttons with one to button, and the bottom row is a little below the waist. This gives the jacket a longer lapel line, which flatter’s Craig’s shorter stature, but it’s not so low that is throws off the balance. It also has a narrow wrap like Roger Moore’s double-breasted jackets from Cyril Castle have, which bring the diagonal lapel line closer to vertical to further help his height. The peaked lapels are a little narrow but with the medium gorge height they look good. Slanted pockets also lengthen the torso, though flaps take away from the effect. Slanted pockets and pocket flaps are unusual details for a dinner jacket, and Bond only wore those in the 1970s. They don’t look bad, but straight jetted pockets would have been the ideal choice. The jacket is also detailed with four buttons on the cuffs and double vents. It is cut with a clean chest and straight, padded shoulders. The buttons are silk-covered. The trousers have a straight leg with a silk stripe down the side.

The dress shirt has a spread collar, double cuffs and very large pleats on the front, and Craig wears it with black onyx studs. He wears a black silk bow-tie and a white puffed pocket handkerchief. The shoes are black cap-toe oxfords with a chiselled toe. Though the outfit is adventurously styled, it remembers black tie tradition and has a very flattering fit. When standing next to Nicole Kidman, who is already taller than Craig without heels, the dinner jacket gives Daniel Craig the presence he needs on stage.