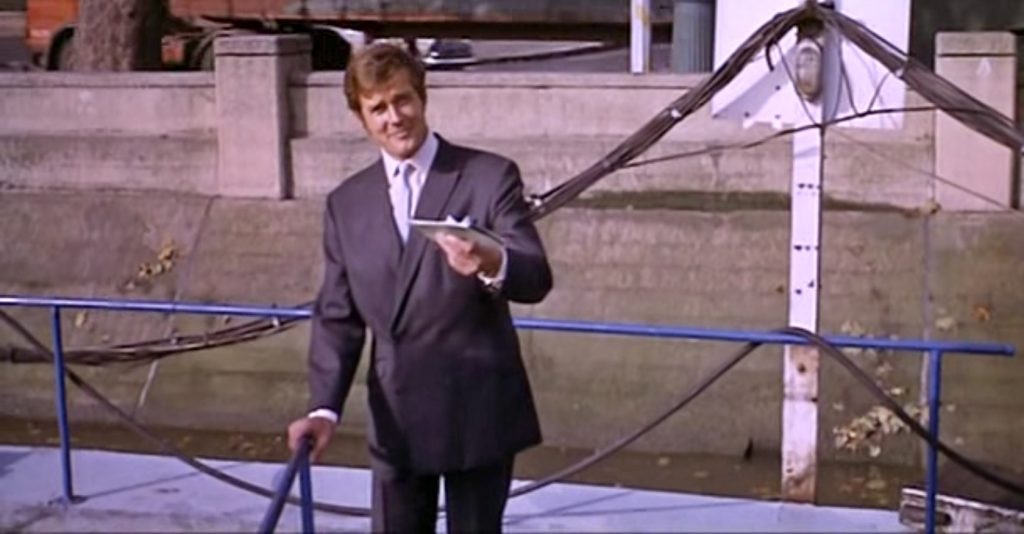 Roger Moore’s 1969 film Crossplot is like a cross between an episode of The Saint and a James Bond film. Moore plays talent scout Gary Fenn, who is identical in appearance to The Saint character Simon Templar except he has a more fashionable haircut that’s combed forward with longer sideburns. The Cyril Castle suits—an iridescent blue and red dinner jacket, a navy pinstripe double-breasted suit and a charcoal multi-stripe suit—and shirts in the film were taken straight out of Moore’s wardrobe for the final season of The Saint, which had just ended production.

The navy double-breasted pinstripe suit, which this article will focus on, first appeared in The Saint‘s sixth series episode “The Time to Die” and later in “The Scales of Justice”. The suit’s worsted wool cloth has very closely-spaced alternating white pinstripes and double track stripes on navy, which from a short distance mixes with and mutes the navy to give the suit a semi-solid charcoal blue effect rather than a classic navy pinstripe look. Suits with closely-spaced pinstripes were something Roger Moore wears throughout The Saint and later wears in Moonraker. 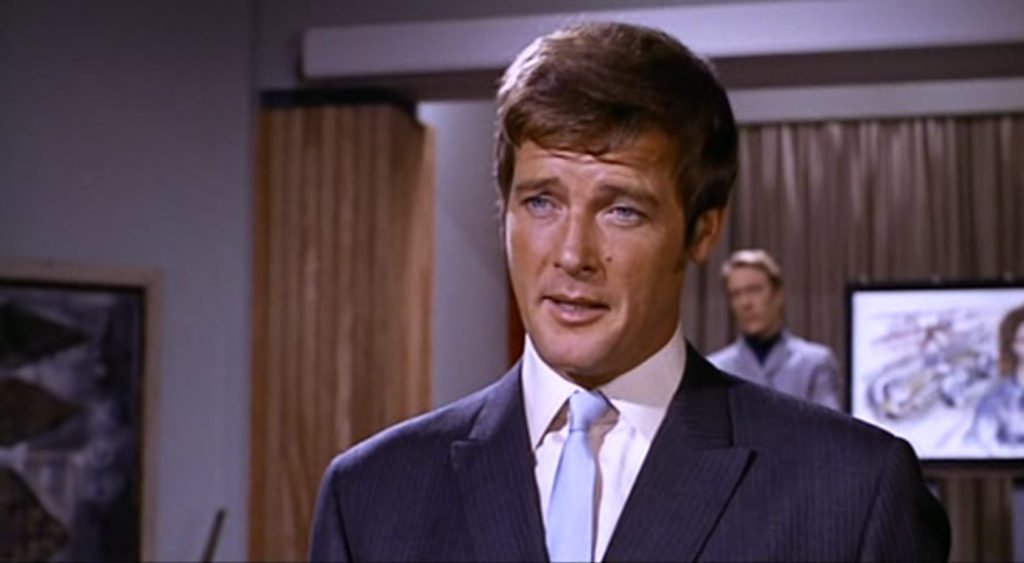 The suit jacket is four-button double-breasted with two to button. It is similar to the classic six button double-breasted jacket but lacks the two vestigial buttons at the chest. Like Cyril Castle’s usual double-breasted suits, this one has a narrow wrap—or overlap—for a slimming effect on Moore. It is cut with natural shoulders and a full chest. It has narrow peaked lapels, which aren’t quite as narrow as the notched lapels Moore wears on his single-breasted suits in Crossplot and The Saint. The narrow peaked lapels are a little more flattering than his ultra-narrow notched lapels. The suit jacket is rakishly detailed with single-button gauntlet—or turnback—cuffs, slanted hip pockets with narrow flaps, and double vents. The suit trousers have a darted front, cross pockets and a tapered narrow leg, and they are worn with a black belt. 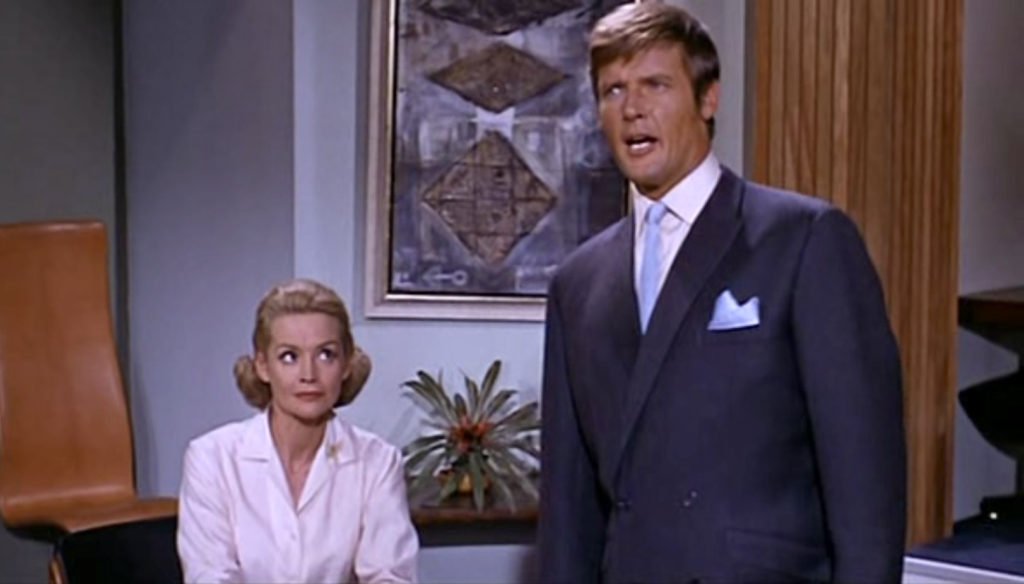 Moore’s cream shirt is made by Bond-series shirtmaker Frank Foster in the same style as all of the shirts that Moore wears in the final series of The Saint. The shirt’s spread collar is larger in proportion to the tie and lapel width. Fashion typically dictates that shirt collar point length and tie and lapel width should match, but it’s usually more flattering to wear a collar that matches the face rather than the jacket’s lapels. The shirt has two-button cocktail cuffs, a plain front and a darted back. The shirt length is short compared to the traditional length of a tucked shirt, but in Frank Foster’s typical manner the shirt’s hem is only slightly curved and has vents on the side. 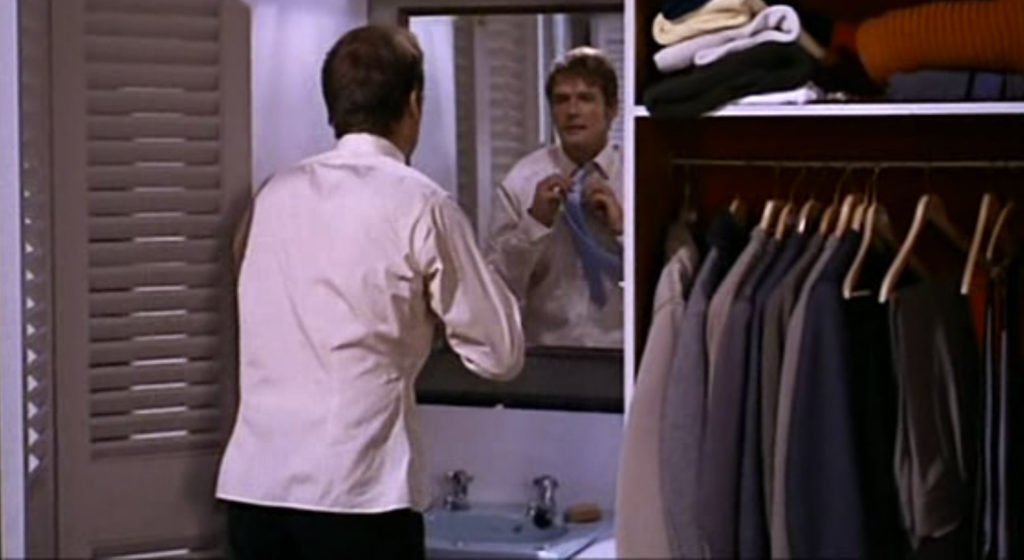 The secretary ties Moore’s tie in a four-in-hand knot around her own neck, loosens it and then places it around Moore’s neck. It is solid light blue, and unstylishly Moore wears a matching light blue silk handkerchief in his breast pocket. But it is placed in the pocket in an unstudied two-point fold. It look as if he just stuffed it in his breast pocket and the two points formed naturally, but that is most likely not the case. Moore wears black socks, and his shoes are black slip-ons. 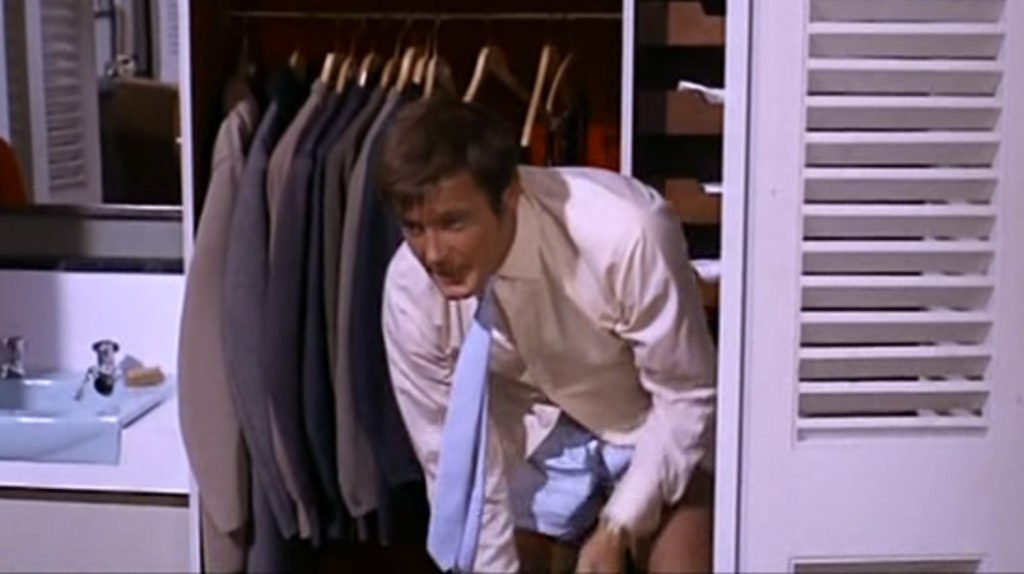 Since we get to see Roger Moore dress into the suit, we get a look at parts of his outfit under the suit we don’t ordinarily get to see. Though we never get to see what James Bond wears under his trousers, Roger Moore’s underwear in Crossplot may give us a clue. When he changes his trousers we see his boxer shorts. They are light blue—perhaps purposely matching his tie—and probably a fine cotton poplin, which is one of the most comfortable types of woven cloths to wear as boxers. 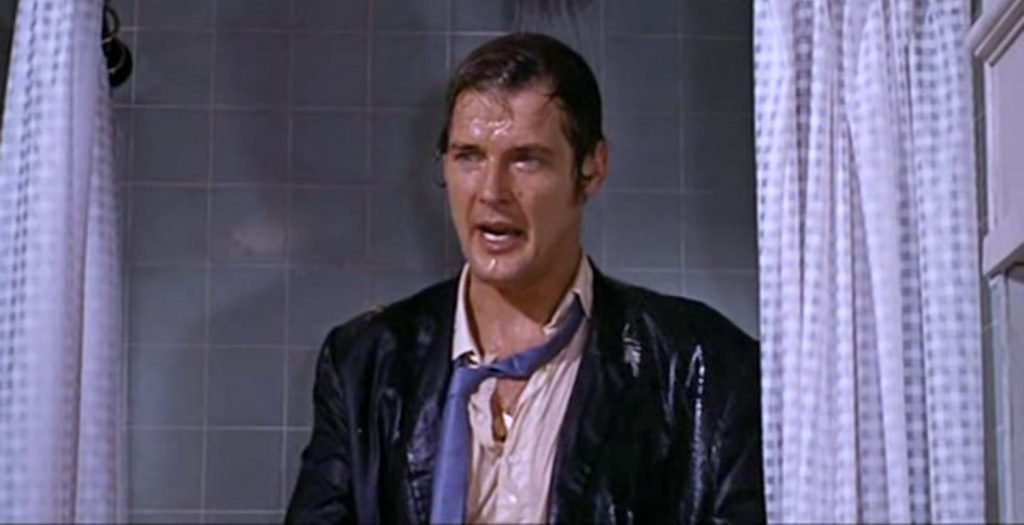 Unfortunately, the suit is ruined and shrunk in Crossplot when Moore is pushed off a boat into the water. Because of he is a gentleman, he leaves his suit, shirt and tie on when taking a shower to warm up when in the company of a lady.

For an additional James Bond connection, Bernard Lee, who plays M in the first 11 Bond films, appears in Crossplot.