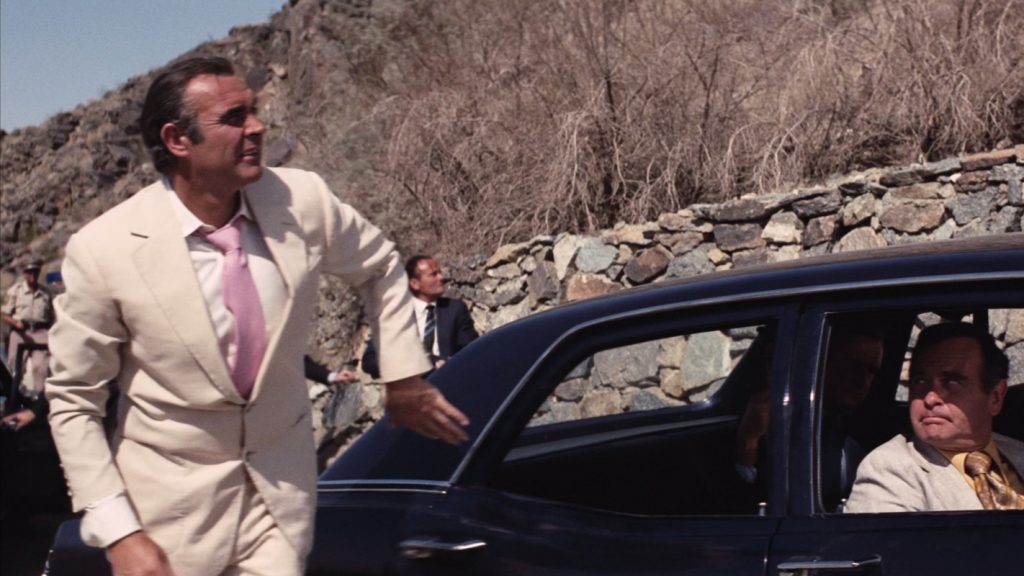 Yesterday in the United States was Memorial Day, the day that starts the summer clothing season. To celebrate the beginning of summer let’s look at the cream linen suit made by Anthony Sinclair that Sean Connery wears in Diamonds Are Forever. The suit is made of a heavy Irish linen, which is heavy to resist excessive wrinkling but still wears cool.

The suit has a button jacket jacket with soft shoulders and roped sleeve heads. The suit jacket has an open patch breast pocket and lower open patch pockets, a common sporty detail of lightweight suits such as this. The jacket also has double vents and four buttons on the cuffs, typical of English tailoring of the time. The jacket’s lining is bronze. The suit’s darted front trousers have a waistband with a square extension and “Daks tops” button-tab side-adjusters with three smoke mother-of-pearl buttons on each side. The legs are tapered with plain bottoms. The trousers have on-seam side pockets, a hidden coin pocket under the waistband on the right side and a single-jetted pocket on the right side in the rear. The trousers also have a line of pick stitching about 6 mm away from the outseam to keep the seam flatter and give the trousers a sportier look.

When Connery arrives at Willard Whyte’s home he can be seen with both his suit buttons fastened, a mistake he first made in Dr. No. It’s the mark of an amateur suit wearer and shows that even though he made it through six Bond films, Connery still wasn’t entirely comfortable wearing suits. Not buttoning the bottom button isn’t an arbitrary rule. The bottom of a suit jacket is cut away and the bottom button and buttonhole do not line up. This causes unsightly bunching, and someone on the set should have corrected this. 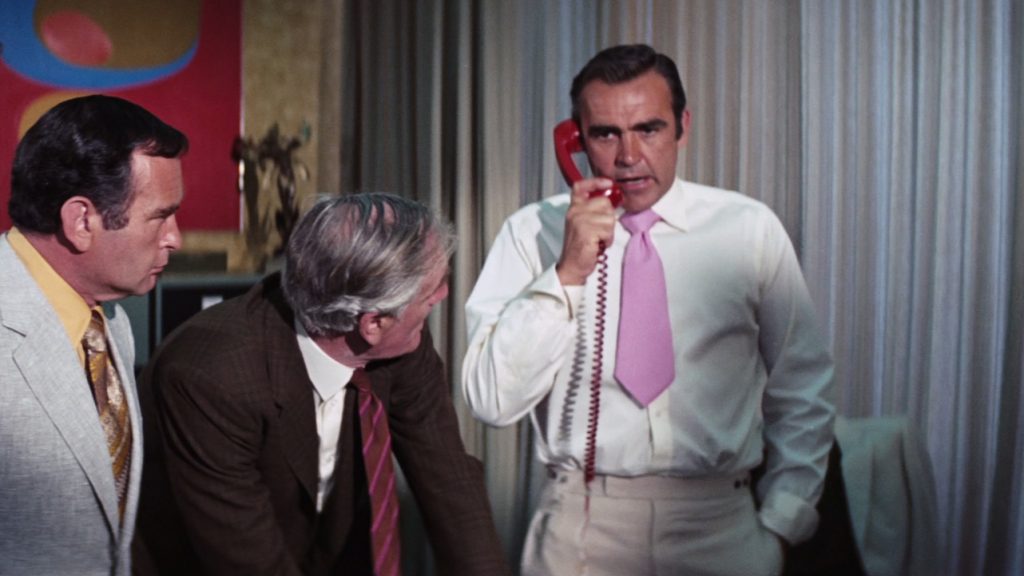 When James Bond enters the house, his suit jacket is removed. The filmmakers likely had the suit jacket removed so that when he is later thrown into the pool the jacket wouldn’t get wet, as every take would then require a new set of clothes. It’s easier and cheaper for Anthony Sinclair to make numerous pairs of trousers than it is for him to make a suit jacket to go with each additional pair of trousers.

Bond’s Turnbull & Asser shirt is cream, with a spread collar, two-button turnback cuffs (though Bond only fastens the first button), a front placket and rear shoulder pleats. Bond wears the suit twice; the first time is in the pre-title sequence with a brown tie, beige socks and brown derby shoes. The second time is with a wide pink satin tie, black socks with a light blue band at the top and brown leather monk strap ankle boots. The shoes and boots are both likely from John Lobb Ltd of St. James’s, London. The shoes are their “V-Front Plain” and the boots are the “Strap Hilo Boot”.

The notorious pink tie that Bond wears with this suit is very un-Bond-like, but the worst part about the tie is the extremely short length. The front blade makes it only three quarters of the way down to his waist, and the rear blade is only a few inches long. Bond ties a Windsor knot, which takes up too much of the tie’s length. Because the tie is wide, the windsor knot ends up gigantic. A four-in-hand knot would at least halfway solve the problem of the length and knot’s size. Because more ties than usual would be needed for the pool scene, it’s likely this pink tie is of lower quality than the Turnbull & Asser ties Bond wears throughout the rest of Diamonds Are Forever. It certainly does not match the other ties in width or length.

The tie is reminiscent of the short, wide and loud “kipper” ties that were made popular in London in the late 1960s by designer of flamboyant fashions Michael Fish. Kipper ties were wider than Connery’s pink tie, often approaching five inches as opposed to Connery’s under-four-inch tie. Connery’s tie looks wider than it is because of the short length and because we’re used to seeing him in considerably narrower ties in the 1960s. But this tie checks off the short and loud boxes of the kipper tie, since a pink tie is very loud as far as Connery’s usually dark-tied Bond who likes is concerned.