Based on the Casino Royale jacket’s full cut, straight shoulders and shape of the lapels, it could possibly be made by Brioni, who made Daniel Craig’s suits and shirts as well as the tailored clothes for all the men at the poker table at the casino in that film. I have no guesses as to who made the jacket in Quantum of Solace.

The trousers in Casino Royale are brown and grey pick-and-pick, which ends up looking like taupe. They have single reverse pleats—the more common Italian style of pleats that opens outwards—and were a very popular style when Casino Royale was made in 2006. By 2008 when Quantum of Solace was made, pleated trousers had vanished from many stores. Mr. White’s trousers have a flat from in Quantum of Solace to reflect this. The trousers in Quantum of Solace are also a different colour: black and grey pick-and-pick. These trousers are the same two colours that are found in the jacket’s tweed, but the trousers contrast the jacket with a smaller scale and smoother texture.

The shirts in both films have the same idea but different executions. The Casino Royale shirt is dark blue with a white hairline stripe. It has a point collar, rounded button cuffs and a plain front with no placket. The Quantum of Solace shirt has a more classic look in medium blue oxford, which is a basket weave in medium blue and white yarns. It also has a point collar and rounded button cuffs, but it differs from the Casino Royale shirt with a raised placket and a breast pocket.

The ties in each film also have similar ideas but different executions. In Casino Royale the tie is navy with a brown pebble pattern, and in a diagonal arrangement over the tie are white dots surrounded by four light blue dots. The combination of blue and brown in the tie is a combination that costume designer Lindy Hemming often dressed Pierce Brosnan in for his Bond films. She must not have liked that combination for Daniel Craig, but she found another character to use it on with Mr. White in Casino Royale. For Quantum of Solace, Frogley chose the colours she liked from the Casino Royale tie and came up with her own take on it. This tie is simpler and is a solid navy with white and light blue squares.

Overall, Mr. White’s outfit in Quantum of Solace is more elegant and more like something James Bond himself would wear. Bond, however, would be more likely to wear black shoes than light brown with grey trousers. The outfit in Casino Royale, on the other hand, is flashier and more continental due to the jacket’s more modern pattern and there being more colours in the outfit. 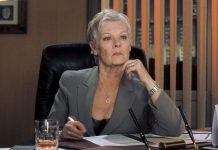