Fashion in the early 1980s rebelled against the excess of the 1970s style, but that excess would take only a few years to return to fashion. In the early 80s we see a number of well-dressed men in the Bond series, and Topol’s character Columbo in For Your Eyes Only is one of them. The navy double-breasted blazer is made by tailor Robbie Stanford, who was two doors down from Anthony Sinclair at 27 Conduit St. The blazer has a typical English cut, with straight shoulders and roped sleeve heads. On the front there are four buttons with two to button, the traditional English arrangement minus the top two vestigial buttons. Those buttons are done away with here to make room for a patch breast pocket. The two hip pockets are also open patch pockets. The blazer has swelled edges, slightly narrow peak lapels, double vents and two-button cuffs. The buttons are brass with an anchor motif. 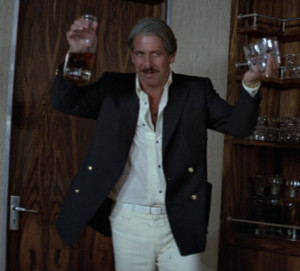 Columbo’s cream shirt is made by Frank Foster. It has a spread collar and square-cut, two-button cuffs, and the buttons are a contrasting smoked mother of pearl. The cream gabardine trousers have a flat front and frogmouth pockets. He wears the trousers with a white belt. Columbo’s outfit is great for warm weather, especially by the water—or on the water where Columbo wears his.