Colin Salmon plays M’s aide and Deputy Chief of Staff Charles Robinson in Tomorrow Never Dies, The World Is Not Enough and Die Another Day, but it’s not until his third and last Bond film that he is dressed almost to a level of elegance equal to James Bond’s. That is not to say that he is dressed like Bond. Robinson is dressed in Die Another Day in a much flashier manner in a navy three-piece suit with red chalk stripes. The suit is most likely from an English brand, judging both by the jacket’s cut and the presence of a ticket pocket.

The button two suit jacket has padded shoulders with a slight pagoda effect that is emphasised by roped sleeve heads. The jacket has a clean chest and a gently suppressed waist. The pockets are straight with a ticket pocket. The waistcoat has five buttons down the front, and Robinson leaves the bottom button open. The waistcoat, however, is too long and reaches far below the waist. The length is a common problem with ready-to-wear waistcoats. Waistcoats are made too long to make up for people wearing their trousers too low, but waistcoats weren’t originally designed to be so long and thus are unable to fit the body well below the waist. The waistcoat’s buttons are also too far apart. Robinson’s suit trousers have a straight leg and probably a flat front. Apart from the waistcoat, the suit fits very well. The waistcoat gives this suit away as ready-to-wear.

The red tie also coordinates with the suit’s red stripes. The tie has horizontal ribs, which means the tie is woven with a 45-degree twill weave. Since good ties are cut on the bias (cut on a 45-degree angle to the cloth’s warp and weft threads), a 45-degree twill wale will either become horizontal or vertical. Robinson’s tie has a fine yellow windowpane pattern. The tie is tied in a windsor knot with a dimple. Robinson’s black shoes have too heavy a sole to be worn with this elegant suit, a problem that is hardly noticeable when the shoes only have a couple seconds on screen.

Whilst Robinson isn’t perfectly dressed, he is one of the best-dressed men in Pierce Brosnan’s Bond films. 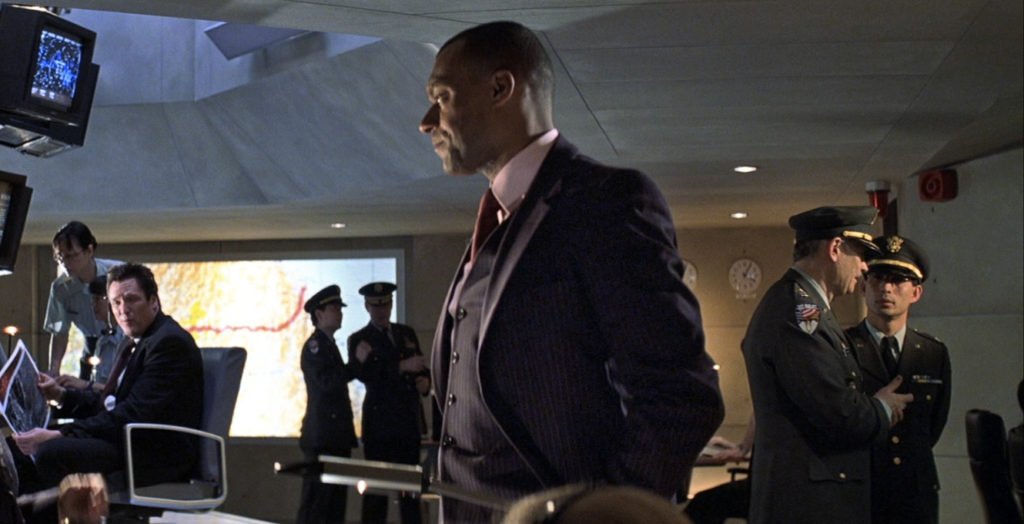