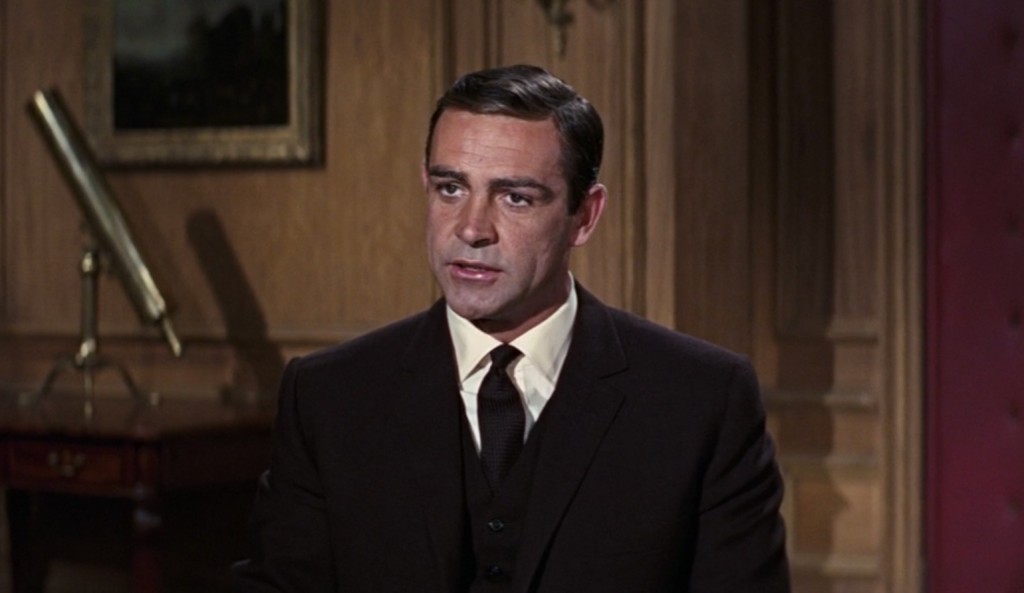 In Thunderball, James Bond wears a brown and black mix worsted-mohair blend suit by Anthony Sinclair to the office. Brown hasn’t always been accepted for citywear, though Bernard Lee’s M has also worn brown to the office and the secret service doesn’t have the same dress code that banking would. Bond’s suit is a three-piece in the same style as the grey flannel suit he wears earlier in Thunderball. Brown typically isn’t a colour that would flatter Sean Connery’s cool complexion, but this suit is a cool brown that has more blue in it than typical browns. It actually looks somewhat purple.

The suit jacket is Sinclair’s typical cut with two buttons on the front, natural shoulders, roped sleeve heads and a draped chest. The lapel rolls gently to the top button, similar to the lapel on a button three jacket. The jacket is minimally detailed with jetted pockets and no vent at the back. The cuffs have the standard four buttons. The waistcoat buttons 6 and is cut straight across the bottom, as was the current fashion. The suit trousers have double forward pleats, turn-ups and button-tab side adjusters. 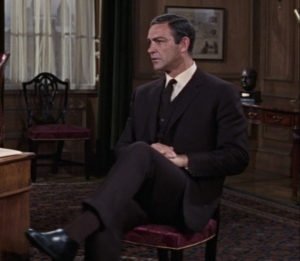 The most basic complement to the brown suit is the cream shirt. Bond’s cream shirt from Turnbull & Asser has a spread collar and cocktail cuffs. His tie is a brown grenadine, tied in a four-in-hand knot. Bond’s shoes are short, black, elastic-gusseted boots, following the city standard to black footwear even though brown would be a better match. Boots are the best complement to a narrow trouser leg like Connery wears. Narrow trouser legs don’t break well over the shoe and need to be hemmed shorter to look neater. Because they are hemmed shorter the boot makes it less likely for the socks to show when walking. Bond’s brown socks that match the trousers continue the leg line in case sock is exposed when walking.

“I think I had a hat when I came in,” recalls Bond as he walks out of the office looking at an empty hat tree. Not only is the trilby hat missing, but so is the rest of the outfit he walked in with: the navy blazer, grey trousers, blue shirt and navy tie. 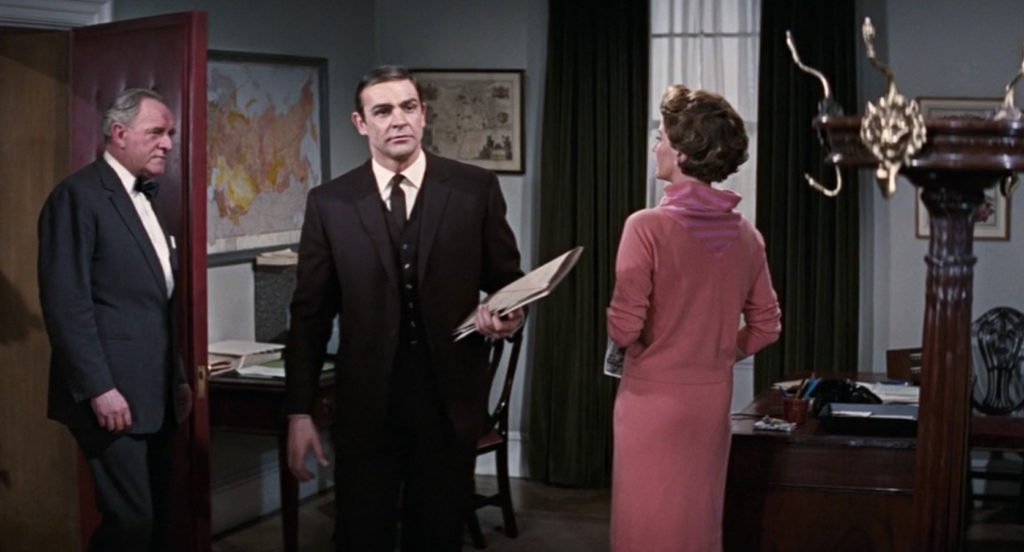 This suit was featured inside a GQ feature on Anthony Sinclair in 1966, but with a striped knitted tie in place of the grenadine. This suit, sans waistcoat, was also sold at auction at Christie’s in South Kensington on 11 December 1997 for £5,175.