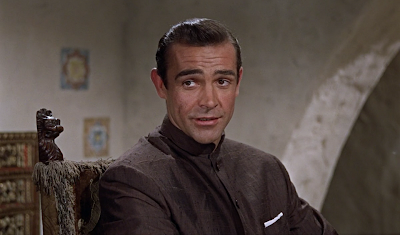 A prisoner of Dr. No, Bond dons the Asian-influenced clothes provided for him as Dr. No’s guest. The main piece is a brown silk Nehru jacket. The jacket has five buttons down the front with curved sides. There are no vents in the back. Since the Nehru jacket is partially influenced by the lounge suit, they often have similar pockets. Whilst Bond’s Nehru jacket does not have hip pockets, it is has a welted breast pocket complete with a folded white linen pocket square. Underneath the Nehru jacket Bond wears a white crew-neck t-shirt. 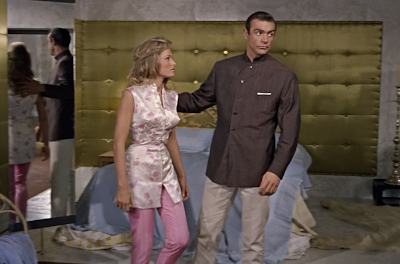 Bond wears stone-coloured flat front trousers, probably in cotton poplin. The trousers have slanted pockets, an extended waistband and side tabs. The trousers have a plain hem, but in some shots he turns up the bottoms. These are identical in all but colour to one of the two pairs Connery wore in the outdoor scenes on Crab Key. Connery wears two different pairs of shoes. The first is a pair of navy canvas slip-ons with crepe soles. The second is a pair of navy canvas three-eyelet derbys with rubber soles and worn for the purpose of climbing through the pipes. These shoes were also worn in the outdoor scenes on Crab Key. It’s often the case in the Bond films where Bond wears different shoes in the same scene for stunt purposes. 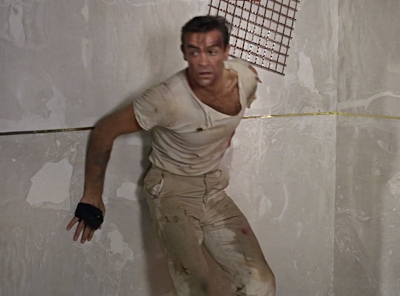