When visiting Morocco in Spectre, James Bond wears a light brown jacket and slightly lighter khaki aged cotton gabardine trousers, both from Brunello Cucinelli. Daniel Craig is a big fan of Brunello Cucinelli and is often seen wearing their clothes at James Bond press events and in his personal life. It was likely his decision to dress Bond in this outfit. Tom Ford produced a khaki left-hand twill cotton two-piece suit as part of their Spectre collection, and it’s likely Bond was originally supposed to wear it in the scenes where he instead wears this outfit. Spectre has had the largest input from Daniel Craig in all of his Bond films’ wardrobes.

Since Bond is back in Morocco, this outfit recalls the tan gabardine suit that Timothy Dalton wears in Tangier in The Living Daylights. The jacket and trousers in similar shades of brown combined with a knitted tie loosely recalls the brown barleycorn hacking jacket and fawn cavalry twill trousers that Sean Connery wears in Goldfinger. The return of brown tailored clothing also reminds us of the numerous light brown suits that Roger Moore wears in his Bond films. This is the first time James Bond wears an odd jacket that’s not part of a suit since Pierce Brosnan’s navy blazer in GoldenEye.

The jacket is made from a blend of 51% wool, 41% linen and 8% silk. This blend gives the jacket durability and breathability with a slubby texture. It is has three buttons down the front with the lapels rolled over the top button. The jacket is cut with narrow soft shoulders, natural sleeve heads, a lean chest and a short length, all which give the jacket a Neapolitan-inspired look. The jacket is also unstructured without canvas or padding, for a relaxed and casual look that is light, cool and comfortable. It has a quarter lining for ultimate breathability. The jacket is detailed with double vents (the only jacket with this style rear Bond wears in Spectre), four cuff buttons and slanted pockets. The cut, style and construction of this jacket give it a casual look that pairs well with cotton trousers.

The medium-width lapels have a fishmouth shape, where the top edge of the lapel points outward and gives the lapel a narrower notch. The lapels are finished with noticeable prick-stitching about half a centimetre from the edge. This infuses the jacket with a sporty look similar to swelled edges, but the effect here is more subtle. The buttonhole in the left lapel is a keyhole shape, which is usually frowned upon for the lapel buttonhole because a straight hole looks more elegant and the keyhole buttonhole is usually a shortcut. This type of buttonhole is more functional than a straight buttonhole, and a button on the back of the right lapel signifies that the lapels can indeed close. On this jacket, the keyhole buttonhole in the lapel is not a shortcut because it is intended to be a functional buttonhole.

The khaki cotton gabardine trousers are only slightly lighter than the jacket but have a smoother texture than the jacket has. They are not, however, different enough from the jacket to prevent this from looking like a mismatched suit. Brunello Cucinelli calls these trousers “chinos”, but chinos are made of chino cotton and these are gabardine. Chino and gabardine have different weaves and finishes, and cotton gabardine is more formal. They have a flat front, a low rise and narrow straight legs. Bond wears the bottoms rolled up for a casual look. The chinos are pressed with a crease down each leg, but the crease is faded and hardly noticeable. Bond wears the chinos with a brown woven leather belt from Brunello Cucinelli. The belt has a solid brown leather tab at the end with holes for the buckle to feed through. It’s not the type of belt where the whole piece is braided and the buckle feeds through the braid. 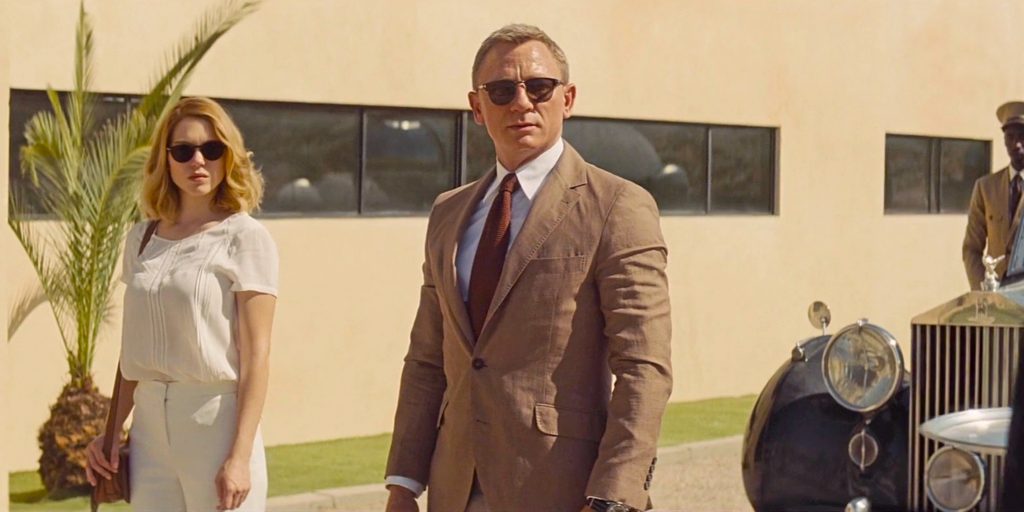 Bond’s white shirt is from Tom Ford. The collar is the same point collar that Daniel Craig wears on his shirts with all the other O’Connor suits in Spectre, and cuffs are two-button cocktail cuffs. Double cuffs would be too formal for this outfit, but cocktail cuffs give the shirt a more special look than ordinary button cuffs would.

The tie, also from Tom Ford, is rust brown knitted silk with a pointed wide end and a straight narrow end. Though most knitted ties have straight ends, Tom Ford and others now sell knitted ties with pointed ends so the tie looks more like an ordinary folded tie. Like with the infamous pink tie in Diamonds Are Forever, this tie is too short and ends a few inches above the trousers. It’s not entirely the tie’s fault since the trousers sit too low, but ideally the tie should be a bit longer and the trousers should site a bit higher. A knitted tie is an effective choice for this casual tailored outfit, which could just as easily have been worn without a tie. The tie adds a level of class to this outfit that one has come to expect from Bond. It is tied in a four-in-hand knot.

The sunglasses are the Tom Ford Henry model. Bond’s boots are the Kenton Suede Boots from J. Crew in a tan colour appropriately named “Sahara”. Though it’s unusual for Bond to wear an American brand, these were likely a personal selection of Daniel Craig’s. They have five pairs of eyelets and three pairs of speed hooks, a plain toe and red mini-lug soles.