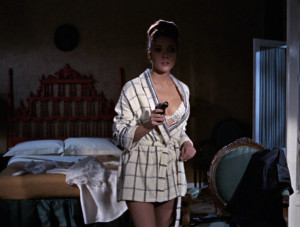 Bond puts on the bathrobe when he wakes up and finds it laying next to him in bed. The robe’s short length is what gives it away a women’s bathrobe, and when Bond sits in the bathrobe it just barely covers the parts that it needs to. On Tracy, the bottom of the bathrobe hits at her upper thigh. Diana Rigg 5’9″ tall, and the short bathrobe plays up the sex appeal of her long legs. Bond, however, is 6’2″ tall and for obvious reasons needs a longer bathrobe. The brief shot of Lazenby just barely wearing the bathrobe that is too short for him may have been for the same reasons Diana Rigg wears it. After all, On Her Majesty’s Secret Service features a new younger and fitter Bond. 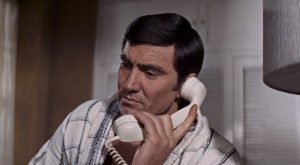 The terrycloth bathrobe is white with a windowpane of double navy lines. The lines are thicker in the vertical than in the horizontal, which is an attempt to make the pattern more slimming by emphasising the vertical lines. There are two sets of three navy stripes follows by a single navy stripe around the shawl collar and the ends of the sleeves. The sleeves are worn folded up. A belt ties around the waist.

This may be the only piece of women’s clothing I ever cover on this blog, unless Bond again wears women’s clothing. It’s a shame we don’t get to see Bond wearing the gold silk pyjama suit with blue piping laid out on his bed.