You don’t need to have seen Skyfall to have gotten a good look at the Skyfall dinner suit. Daniel Craig has already worn his midnight blue Tom Ford O’Connor dinner suit in plenty of other appearances, such as the Olympic opening ceremony and in a pre-taped sketch for Saturday Night Live.

On all the Skyfall posters the dinner suit looks like bright navy, but the photos on the posters have been enhanced and doctored. The dinner suit doesn’t look nearly so bright in the film, even in the daylight scenes, and it is certainly in the range of classic midnight blue and not light navy. In the casino’s yellow lighting it looks blacker than black does under that lighting, and actual black would come out looking somewhere between brown and green. The cloth has a bit of a sheen, but it’s 100% wool.

The dinner jacket is very closely fitted and just a bit too short, providing the fashionable “iconic for 2012” look that costume designer Jany Temime aimed for, as she mentioned to the Associated Press. The shoulders are straight and narrow with roped sleeve heads. It’s a traditional button one with a shawl collar, faced in black satin silk. Also in black satin silk are the buttons and pocket jettings. The dinner jacket has three buttons on the cuffs and a single vent, a first for Bond on a dinner jacket. I’m not sure the reason why a single vent was chosen; it’s too sporty for semi-formal wear and it’s really only something Americans do. A dinner jacket should have either double vents or no vents, as all of Bond’s previous examples show. The single vent is the only non-traditional detail in the outfit.

The Tom Ford dress shirt is cotton voile with a pique bib, collar and cuffs. The shirt has a spread collar, double cuffs and a plain front that closes with shanked mother of pearl buttons that look like studs. This type of dress shirt would ordinarily take studs, and these buttons are more like “attached studs” than they are like buttons. The double-sided cufflinks match the stud-like buttons.

Craig wears a black grosgrain—with the ribs lengthwise, and it clashes with the satin trimmings on the dinner jacket—bow tie in a batwing shape, a black satin cummerbund and a folded white linen handkerchief in his breast pocket. The trousers are held up with white moire braces, though the trousers have side adjusters as well. The shoes are black calf plain-toe wholecuts, the Crockett & Jones Alex. One example of this suit was sold at Christie’s on 5 October 2012 for £46,850 as part of “FIfty Years of James Bond: The Auction.” The dinner suit up for auction was labelled size 48F (equal to a US/UK 38R), even though it was bespoke. 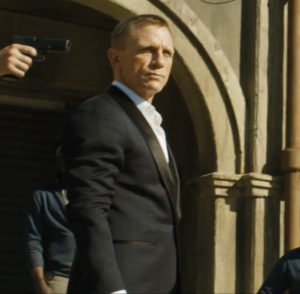