On Christmas Eve morning in On Her Majesty’s Secret Service, Blofeld (played by Telly Savalas) greets the girls outside wearing a British warm-style coat made by Dimi Major in light brown herringbone wool with a collar and lapels faced in light brown astrakhan fur. An astrakan-trimmed coat is a bit over-the-top for James Bond, but it is perfect for a villain, for whom nothing is ever too extreme. The British warm is a double-breasted, knee length overcoat. It usually has six buttons with three to button, as Blofeld’s does, though the fancy lapels and collar are not typical of a British warm. Blofeld’s coat has slanted pockets with large flaps on the front. Blofeld wears an astrakhan hat that matches the coat’s collar and lapels, and he also wears brown gloves.

The clothes Blofeld wears underneath the British warm appear to be the same as what he wears later during the battle at Piz Gloria. The brown zip-front jacket is made by Bogner, probably of an insulating synthetic material designed for skiing in. It has a short stand-up collar, vertical zip pockets on the front, a brown stripe on the sides and elasticised cuffs. Blofeld’s brown breeches match the jacket and are most likely made by Bogner as well. The legs extend a couple inches below the knee and tighten with a buckle. Underneath the jacket Blofeld wears a white mock polo neck jumper. He wears long, thick brown socks and brown suede-effect, rubber-soled ankle boots. The boots are most likely not real suede if the intent is to wear them in snow. 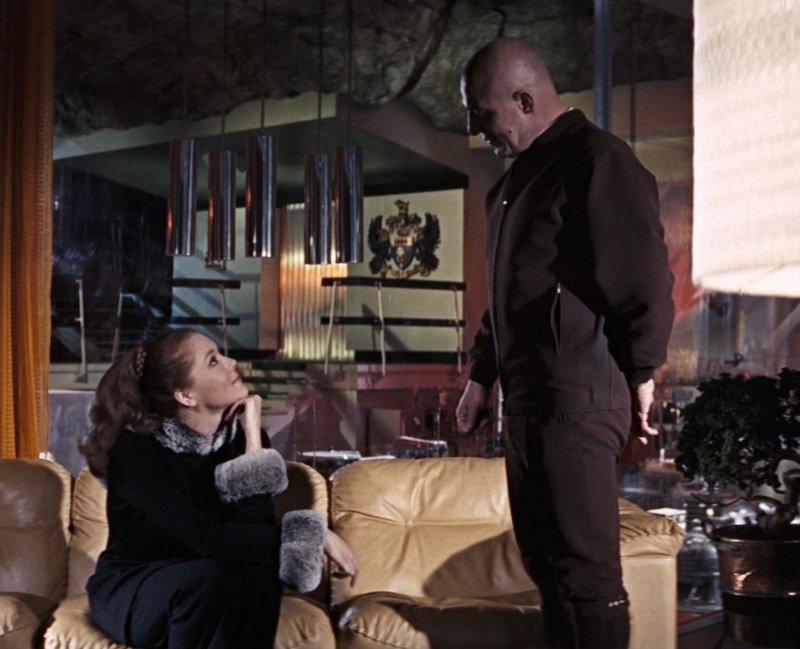