Rory Kinnear, who appeared as M’s aide Bill Tanner in Quantum of Solace and Skyfall, will return to the roll next year in Spectre. Tanner’s suits in Skyfall have a modern English look; they’re slightly more modern-looking than Mallory’s bespoke Timothy Everest suits but not fashion-forward as James Bond’s shrunken Tom Ford suits. One of Tanner’s three suits in Skyfall is a basic button-two navy suit with grey pinstripes. Grey pinstripes are more subtle than the traditional white pinstripes or bolder rope stripes and chalk stripes, but they’re good for the man who doesn’t want to draw undue attention to himself. The shoulders are lightly-padded, the chest is full and the waist is suppressed. Unlike Bond’s suit jackets in Skyfall, Tanner’s suit jacket is made to a tradition length that covers the buttocks. The button stance is high—a trend that started in the previous decade—but it doesn’t agree with Tanner’s figure. Judging by the pulling around the waist, the suit is most likely ready-to-wear.

The jacket has slanted pockets with a ticket pocket, and the front edges of the pockets are rounded much more than pockets ordinarily are. There are double vents in the back. The cuffs have four buttons, with the buttons spaced apart in groups of two. The suit’s trousers have a flat front, low rise and tapered legs with turn-ups. The low rise is most fashionable aspect of the entire suit, and it unfortunately causes the shirt and tie to show beneath the jacket’s button.

Based on the arrangement of the cuff buttons as well as the suit’s style and silhouette, the suit is most likely from the English brand Hackett London. It particularly resembles Hackett’s “Chelsea” cut suit. The Hackett website has an interesting description for their “Chelsea” model:

For the classic Hackett Chelsea cut, think James Bond, who never lets trivial matters such as saving the world from super-villains get in the way of rocking a good suit … It tapers in to define the waist, with double venting used at the rear to ensure that the snug fit doesn’t become constrictive when sitting, or grappling with Russian spies. As you would expect with classic British style, combining subtlety and sharpness is the key here; high armholes accentuate a strong chest, but little to no padding allows the shoulder to gradually slope down, providing a more natural silhouette than Italian suits. 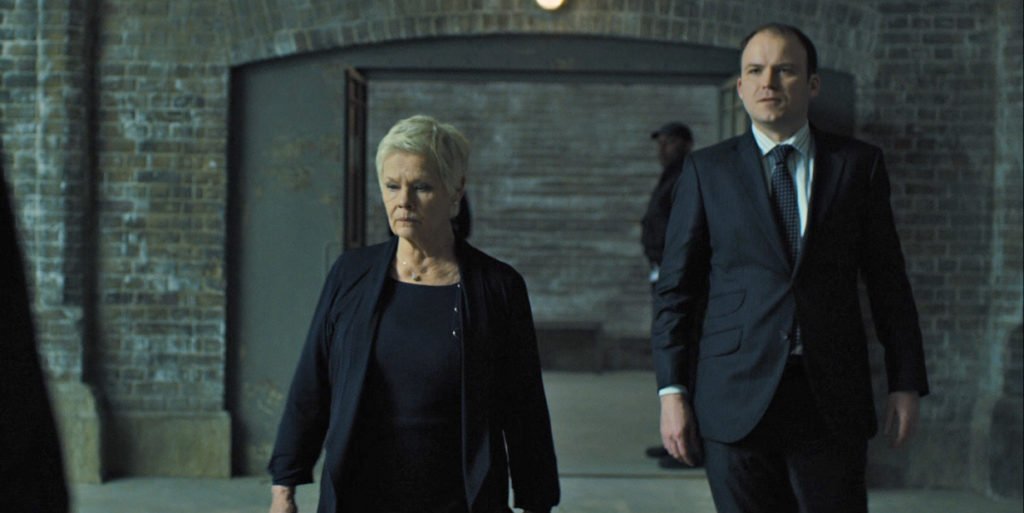 Tanner wears this navy pinstripe suit on two occasions in Skyfall, and he wears it with a different shirt and tie each time. He favours stripes shirts. The first shirt is white with a pattern of thick light blue, mid blue and navy stripes, and the second shirt is mid blue with thick white stripes. Both shirts have a spread collar with medium-length points and a  considerable half-inch of tie space. The collar is too wide and short for Tanner’s round head. A more moderate spread with longer points would better flatter Tanner’s face. The shirts have double cuffs. 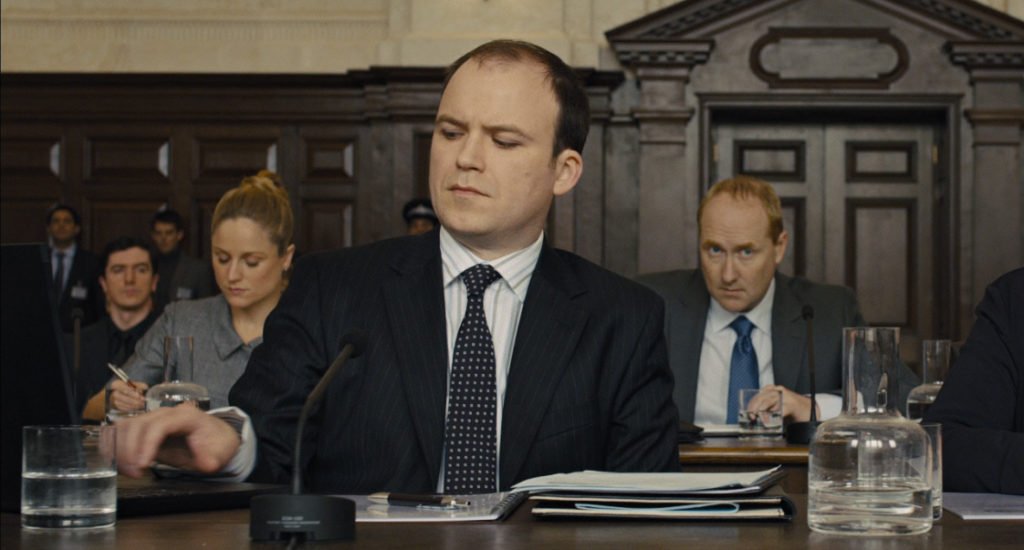 The tie that Tanner wears with the first shirt is navy with small white boxes arranged in a grid. The tie he wears with the second shirt is navy with larger pink squares in a diagonal layout. He ties his ties in four-in-hand knots. With all of his suits, Tanner wears black oxfords with a chiseled toe and black Dainite studded rubber soles, and his trousers are supported by black belt that matches his shoes.