Have you wondered what James Bond’s tailors made for people before they tailored James Bond? Are you curious to know how these tailors looked in their own suits? The works of Bond tailors Anthony Sinclair and Cyril Castle were occasionally pictured in the UK men’s magazine Man About Town, and sometimes the tailors themselves modelled their own creations. Man About Town was a quarterly publication in the 1950s and 1960s that was an offshoot of The Tailor & Cutter, a trade magazine for tailors.

Anthony Sinclair tailored clothes for Sean Connery for his six EON James Bond films and for Woman of Straw. Cyril Castle tailored clothes for Roger Moore for Live and Let Die and The Man with the Golden Gun as well for Crossplot, The Man Who Haunted Himself, Gold and his television shows The Saint and The Persuaders. With the following photos we can compare what these tailors made in the 1950s with what they made for Sean Connery and Roger Moore in the 1960s and 1970s as well as get a closer look at two of the men responsible for dressing Bond.

Starting with the work of Anthony Sinclair, the first is a button two suit from 1954. 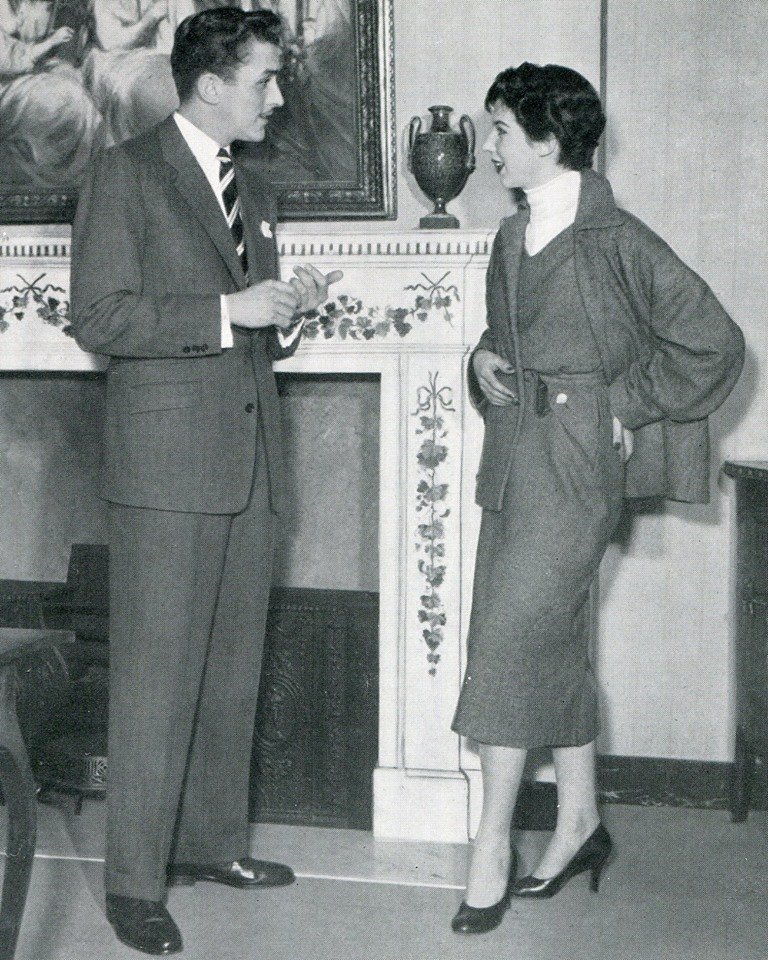 This suit has a different cut than what Connery wore, with narrower shoulders, a closer-fitting chest and wider trouser legs.

The second is a button two shetland tweed suit from 1956, and the photo was taken outside of Sinclair’s premises at 29 Conduit Street. The facade has since been considerably altered.

Notice the considerable taper of the trousers. 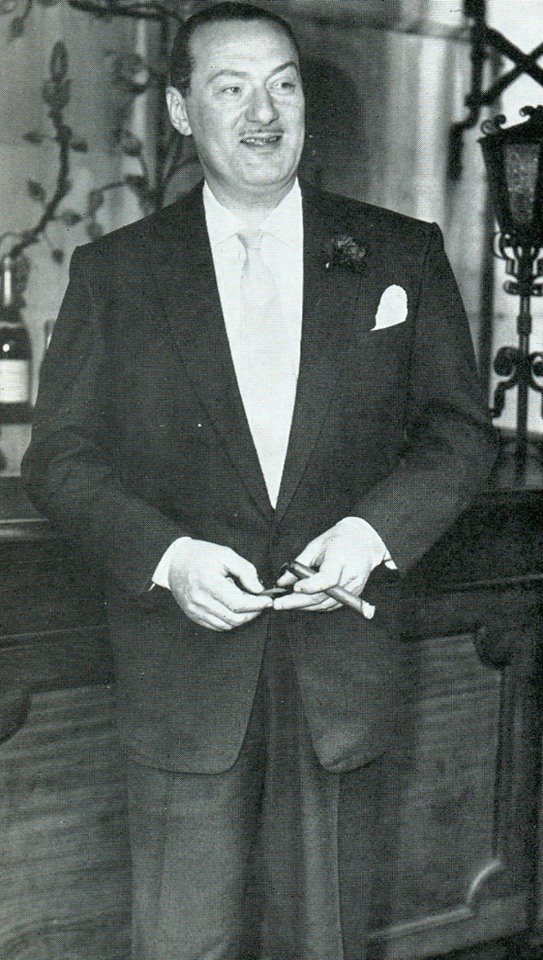 Despite being cut for a considerably different body type than Sean Connery’s, the style of this suit looks familiar with the same soft, roped shoulders and full chest.

The rest of the Anthony Sinclair pieces are from 1957-1958, starting with an elegant three-piece suit in a glen check. 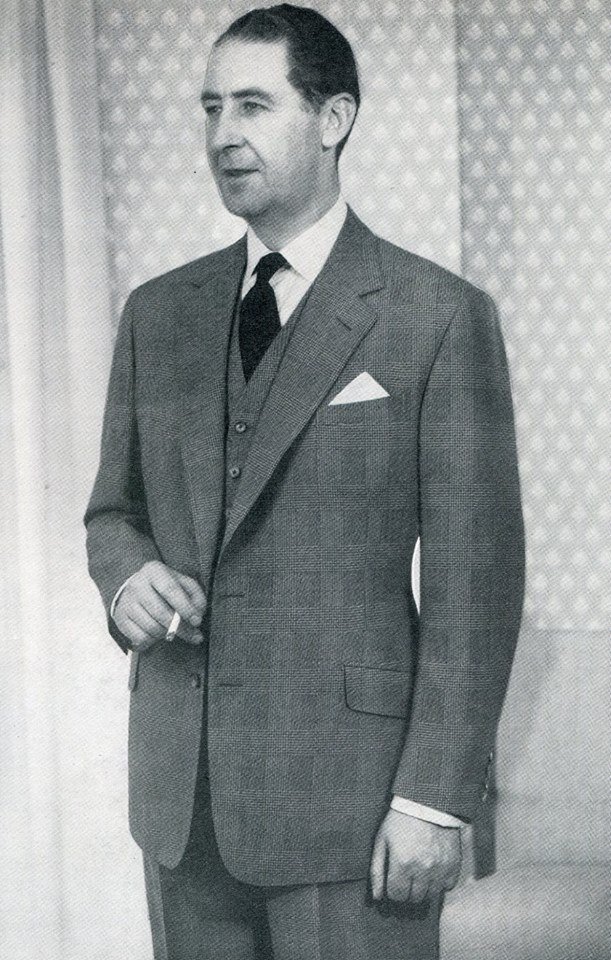 The next three photos feature Anthony Sinclair himself showing off his tailoring skills. 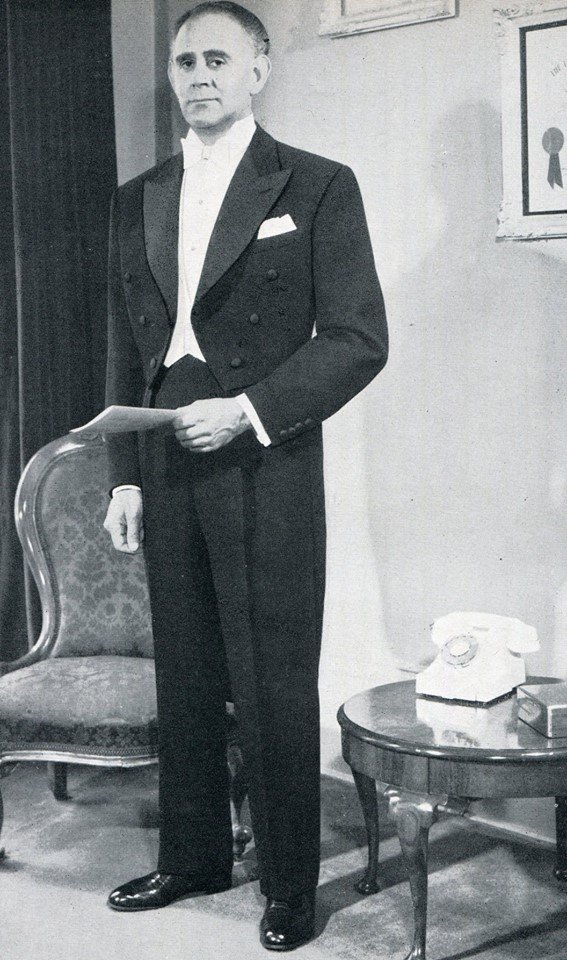 These clothes (with the exception of the tailcoat) look more like Sean Connery’s, as much as they can on someone without such athletic body types. The way Sinclair cuts his suits makes him look hardly any shorter than Connery is, despite a four- or five-inch difference (though the height of the Bentley S1’s radiator grille gives it away). The jackets may have wider lapels than what Connery wears in the 1960s, but the cuts are not any fuller. The trousers have fuller legs. They lack the roped sleeve heads that Connery’s jackets have. The overcoat has a similar cut to the coat Connery wears in Thunderball. The full dress example shows Sinclair’s talents beyond lounge suit, with its very elegantly shaped chest and tapered trousers fully on display.

Now moving on to Cyril Castle’s works, the first suit is a button two example with peaked lapels from 1954.

This suit jacket has the familiar highly shaped cut that Castle tailored for Roger Moore in The Saint, with soft shoulders, a draped chest and a suppressed waist. It demonstrates how to successfully cut closed quarters. This jacket also has the gauntlet cuffs that Castle wouldn’t give to Moore until 1966. The trousers are noticeably trimmer than what Sinclair tailored at the time, and they are especially trim for the 1950s. Judging by the curve of the top of the crease, they likely have reverse pleats. This photo was taken outside of Castle’s premises at 10 Sackville Street before he later moved to 42 Conduit Street—across the street from Anthony Sinclair—in the 1960s. The building that housed Castle’s Sackville Street premises no longer exists.

Also from 1954 is a photo of Cyril Castle himself in a double-breasted suit. 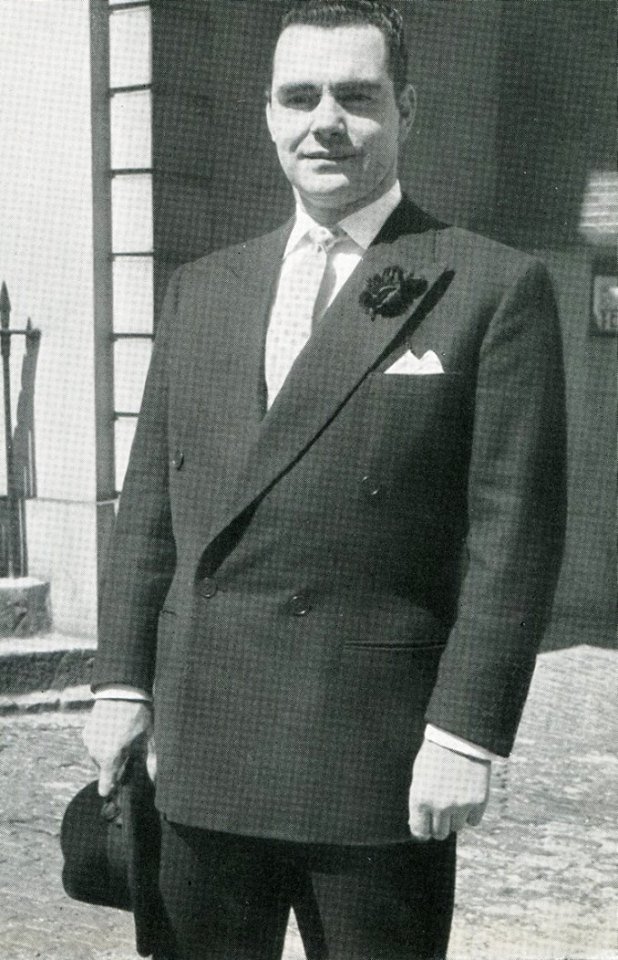 The following is a another photo of Castle from 1958 in a style very similar to what he made for Roger Moore throughout the 1960s in The Saint, with three buttons, soft shoulders, roped sleeve heads, a full chest and very narrow lapels. Like on the above suit, this suit’s jacket has gauntlet cuffs. 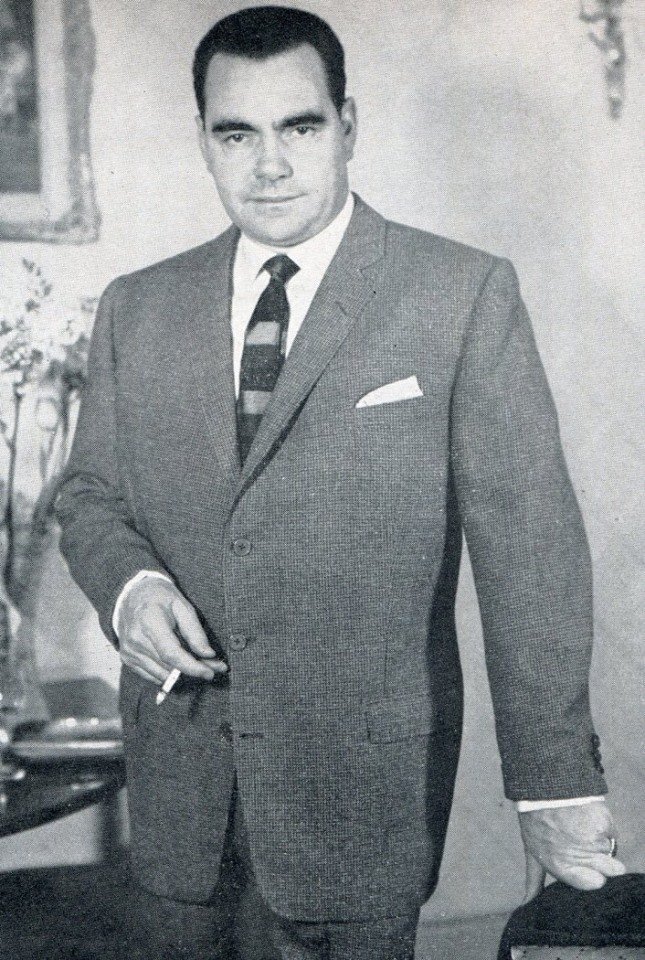 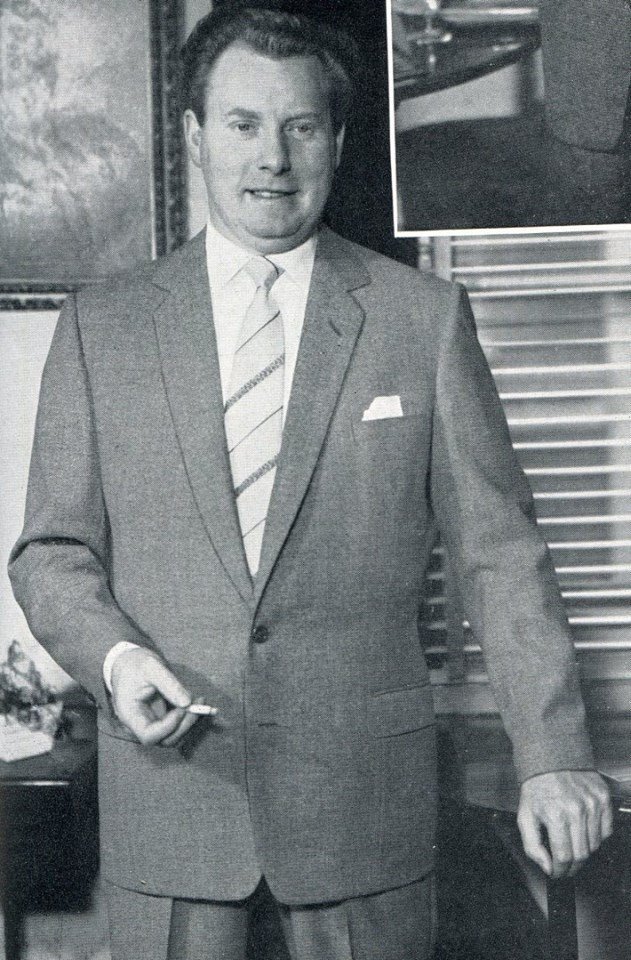 The cut of this suit is similar to Cyril’s but has two buttons instead of three with a steeper gorge. The closed quarters with a large waist unfortunately make him look rather bottom heavy. Again, this suit has gauntlet cuffs.

The last suit is button two example from 1958. 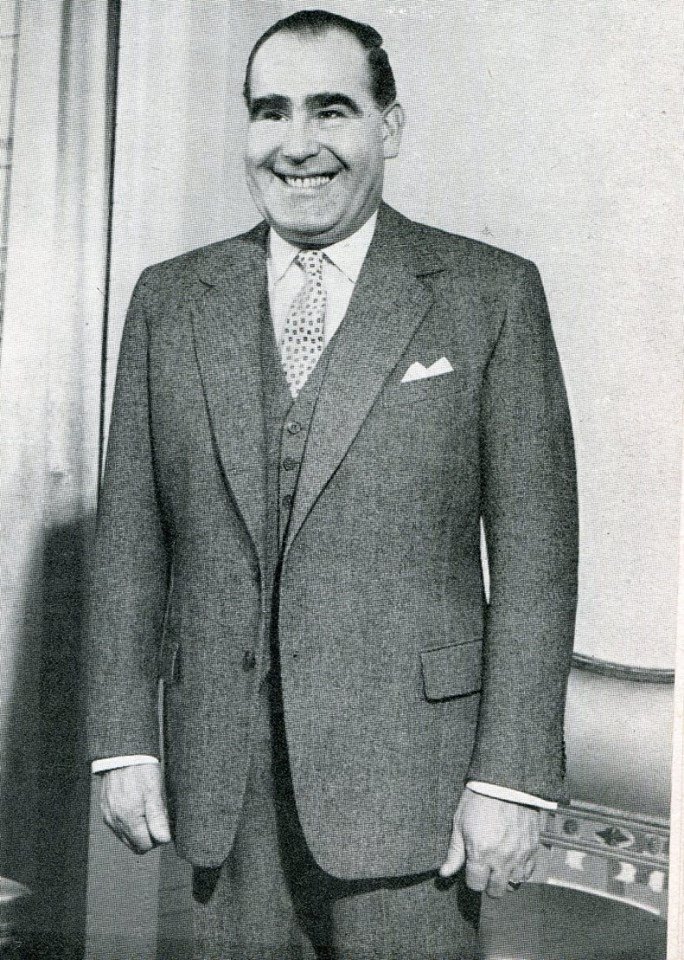 Castle tailored this suit with more structure in the shoulders, which when combined with a very swelled chest and waistcoat gives this man a pleasant and masculine figure.

What we see from Cyril Castle’s worn in the 1950s is something considerably different from what he made for Roger Moore in the 1970s. The suits in Moore’s Bond films have much less fullness in the chest and have been opened up in the quarters. These are more significant changes than the wider lapels are. That’s why the 1954 suit, despite having lapels that are the same width as Moore’s suits’ lapels in Live and Let Die, looks so much different. It wouldn’t matter if you flared the trousers, especially since from what we see of the trousers they look the same.

In the back of the magazines there is a section of classified advertisements from practically every tailor in London, including Anthony Sinclair and Cyril Castle. This gives an interesting look at these tailors beyond admiring their work on screen. Sinclair’s advertisement reads: “makes a limited number of suits each week, the reasons being that each suit is cut individually and fitted by himself, and tailored on the premises by first class craftsmen under his person supervision. Only the finest of clothes including lightweights are used.”

Imagine getting a suit from an English tailor in a week!

Cyril Castle’s advertisement reads: “Tailors to the Stars ! Patronised by top artists who understand and appreciate style and artistry in clothing, including the winner of Tailor & Cutter award for best dressed star of 1954. The personal attention of Mr. Castle at all times awaits you.”

Before Douglas Hayward could claim the title of “tailor to the stars”, Cyril Castle was a celebrity tailor with clients such as Richard Todd, Terry-Thomas and Lee Mortimer. Later, Castle would make suits for other celebrity clients such as Terence Stamp and Frank Sinatra.

A sincere thank you goes to Carmelo Pugliati for scanning these photos from Man About Town and providing them to this blog.