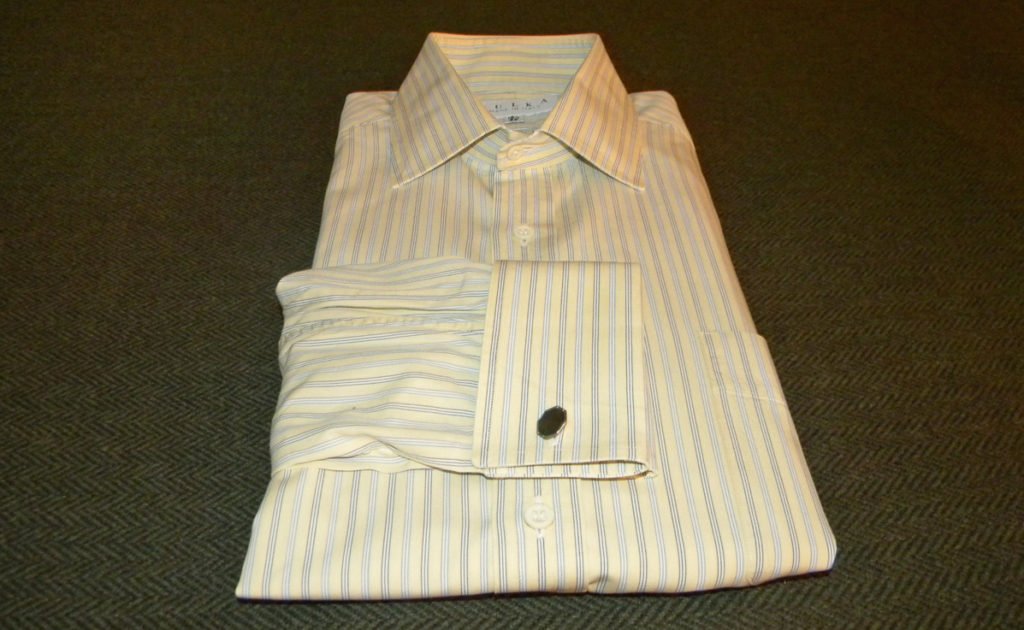 Only in GoldenEye, Pierce Brosnan wears shirts from the famous luxury clothier Sulka. Though I’ve written about Sulka’s shirts before, these wonderful shirts deserve a closer look. I own a Sulka shirt of roughly of the same vintage as the shirts in GoldenEye. Whilst my shirt is ready-to-wear (and purchased second-hand), Pierce Brosnan’s shirts are likely bespoke. Though Pierce Brosnan didn’t start using Sean Connery’s shirtmaker Turnbull & Asser until Tomorrow Never Dies, costume designer Lindy Hemming appropriately chose Sulka to make James Bond’s shirts in GoldenEye. Sulka was originally a New York company but also had other shops in the United States as well as in London and Paris. The shirt I will be examining is made in Italy and is the closest of my Sulka shirts in style to Pierce Brosnan’s shirts based on the placket design. I have other Sulka shirts made in France, but those have a different style of placket, as well as different collar and cuff construction. Does anyone know where Pierce Brosnan’s bespoke shirts from Sulka would have been made if purchased through the London shop? 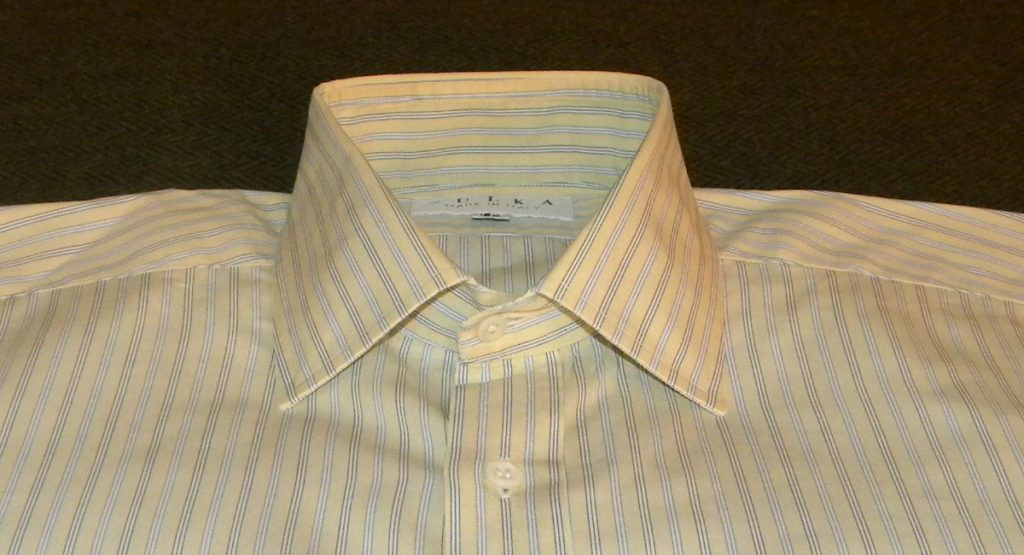 The collar is a moderate spread collar, wider than a point collar but narrower than the traditional spread collar. The points measure 2 7/8″, the back height measures 1 3/4″ and the collar band measures 1 1/8″ in front. There is 1/2″ tie space and the collar points sit 4 1/2″ apart. This Sulka collar has the same measurements as the Classic Turnbull & Asser collar. The collar is stitched 1/4″ from the edge and has removable collar stays. The collar has a fused interfacing, which is how most Italian shirtmakers do their collars. Fusible interfacings are affixed to the outer piece of the collar with a heat-activated adhesive, and by stiffening the outer layer of the collar they make the collar very easy to iron. The shape of the collar on my shirt is similar to Pierce Brosnan’s collar, but the collar on my shirt has twice as much tie space to give it a wider spread. 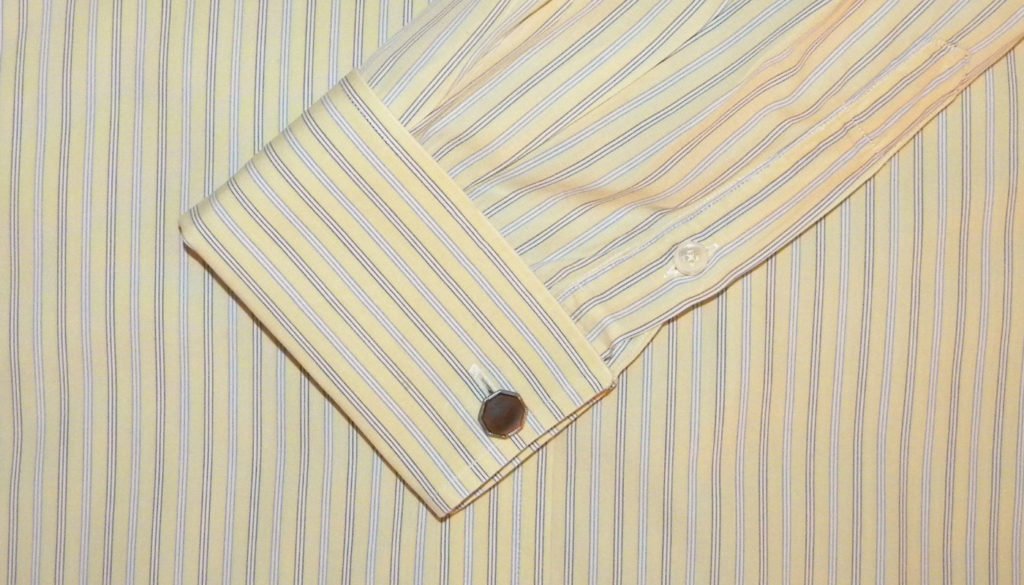 The double cuff measures 5 1/4″ when unfolded, and the link holes are roughly in the middle of the folded cuff, but slightly off-centre away from the fold. Italian shirtmakers usually place their link holes in the middle of the cuffs whilst English shirtmakers place their link holes closer to the fold. Placing the link holes further from the fold keeps the cuff from flaring out and getting caught inside the jacket sleeve, but it has the downside of keeping the cufflinks more hidden. The cuffs have a slightly rounded corner, but the stitching is squared. Like the collar, the cuffs are stitched 1/4″ from the edge and have a fused interfacing. The sleeve has two outward-facing pleats opposite the cuff’s opening to fit the larger sleeve into a smaller cuff. The sleeve’s gauntlet has a button.

The placket is similar to an English-style placket; it is just under 1 3/8″ wide and stitched 3/8″ from the edge. The stitching on the placket matches the stitching at the sleeve attachment and at the base of the cuff. The placket has a fused interfacing to keep it crisp. There are six buttons down the front of the shirt, not including the collar, and the shirt’s buttons are mother of pearl. 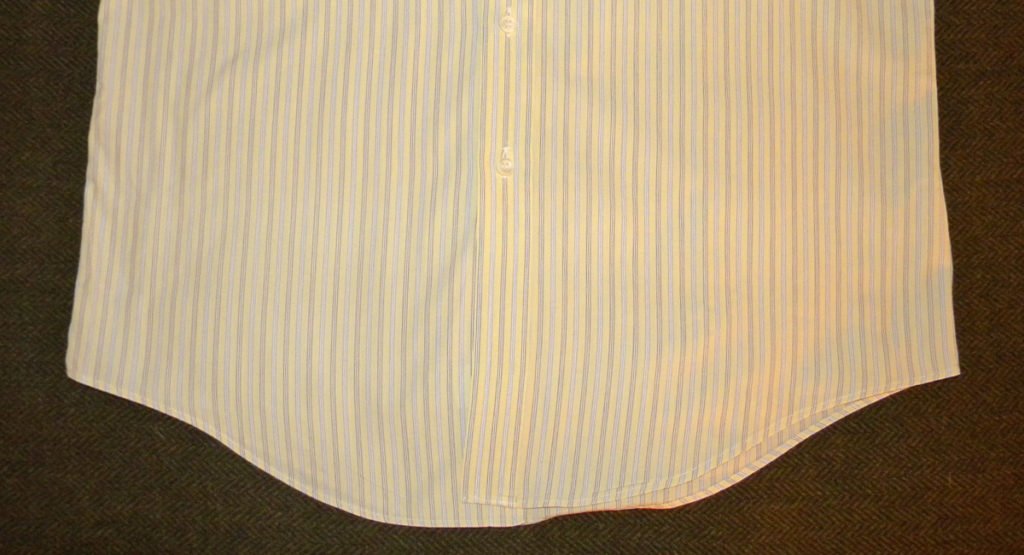 The shirt’s tails are made in the the typical manner for a shirt meant to be tucked: contoured to be higher at the sides than in the front and back. The back of the shirt has a split yoke, but the sides of the yoke are not angled and the stripes go straight across the shoulders as it the yoke were one piece. Under the yoke the shirt has a pleat on either side to give ease over the shoulder blades. 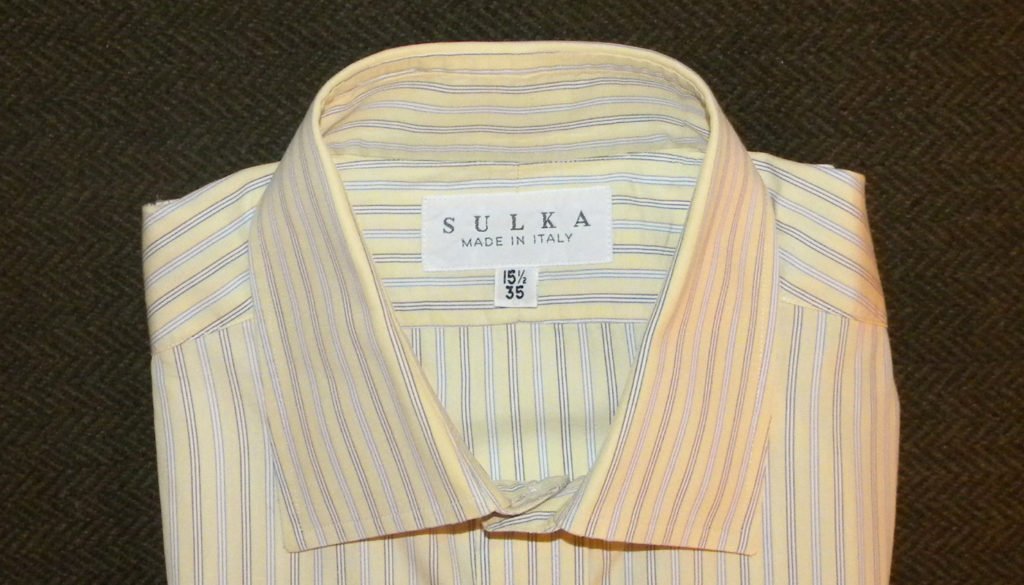 Unlike Pierce Brosnan’s shirts, my shirt has a breast pocket. The pocket has rounded corners and a straight bottom. Like on most ready-to-wear shirts the pocket is a little too large and looks out of proportion on the chest. The pocket is placed very close to the sleeve, which may be placed as such so it stays hidden under an open jacket. 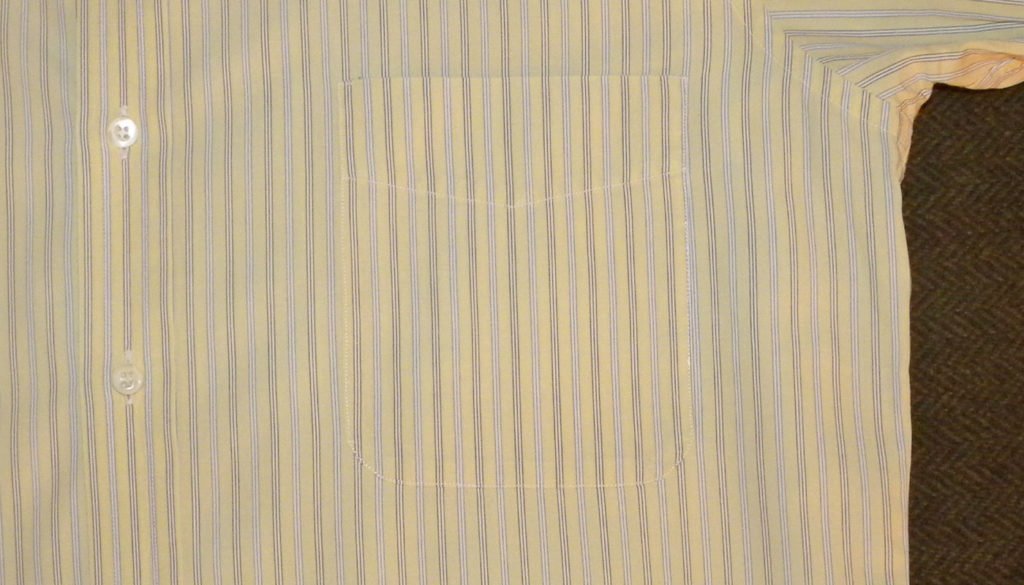