No, I’m not talking about the Miles Davis tune “All Blues.” Usually when Sean Connery wears a blue suit in the Bond films, everything else he wears is blue. Well, everything but the black shoes and white pocket handkerchief. The first time we see the monochrome blue outfit is in M’s office in From Russia With Love (pictured above). He wears a solid navy suit with a matching solid navy tie and light blue shirt. A light blue shirt is very important since it provides contrast from all the dark blue in the suit and tie. Though both the suit and tie are navy, the tie is a little lighter than the suit. To some, this mismatch is not desirable, and it’s practically unavoidable when pairing two items that are very close in colour. Those people would say to avoid wearing things close in colour to avoid the mismatch. But it’s an integral part of the classic Bond look. Once again in You Only Live Twice (pictured above) we see the same all blue outfit. This time the suit and tie are reversed: the suit is light navy and the tie is dark navy tie. Do you think it’s better for the tie to be slightly lighter or slightly darker than the suit? Ideally, it’s best to get them as close as possible, in not only the value (lightness or darkness of a colour) but also the hue (gradation of colour). A warm blue tie will not go well with a cool blue suit, even if they are similar in value. A matching hue is more important than value when pairing a navy tie with a navy suit. Connery brings back the all-blue look in Diamonds Are Forever (below), this time with blue chalk stripes added. This outfit has Connery’s closest suit and tie match, and the tie is only a little lighter. I also can’t leave out the navy grenadine ties that Connery wears with his navy blazers—to which he always gets a close match with the tie—but with grey trousers there’s no longer a monochrome look.

Roger Moore starts out as Bond in Live and Let Die wearing a blue suit, blue overcoat, blue shirt and blue tie (pictured below). But does this outfit qualify as monochrome? Even though the tie is primarily navy, the red stripes technically disqualify this outfit from the all blue category, but for the purposes of pairing a blue tie with a blue suit, it’s all blue. The tie is the darkest navy of the outfit, followed by the overcoat and then the suit. They are all very similar. We don’t see Bond wearing a blue monochrome outfit again until Daniel Craig becomes Bond. I’m not going to count the navy linen suit and light blue shirt worn in the black and white pre-title sequence, since the scene is black and white, and a large brown belt breaks up the blue. But the first suit in Quantum of Solace (pictured below) is very similar to Connery’s striped suit in Diamonds Are Forever. The suit is navy with light blue stripes, the shirt is pale blue and the tie is a pattern of mid blue and black squares. The blue and black of the tie combine to make it look navy overall. The tie does not to completely disqualify the outfit from being all blue, but it doesn’t have the 100% monochrome look of Connery’s classic outfits either. The patterned tie is much easier to pair with the suit than a solid navy tie is.

The navy-on-navy look is something Bond has inspired many to copy, but it’s not easy to get right. And whether Bond gets it right or not is up to you. If you attempt this look, it helps to have multiple solid navy ties in your collection and good lighting to figure out which one works best with the outfit. 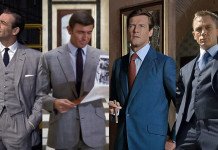