Last month I was married in a bespoke midnight blue Anthony Sinclair dinner suit from Mason & Sons. Anthony Sinclair was the London tailor who made all of Sean Connery’s suits for his James Bond films, and since that time Mason & Sons’ director David Mason revived the name. They no longer use the Anthony Sinclair label for ready-to-wear and made-to-measure, saving it only for the London-made bespoke clothes that truly deserve it. My dinner suit is an example of authentic Anthony Sinclair style in a way that nobody else makes today. In this article I will be breaking down my thought process on how I decided on what to wear for my wedding and the process behind getting the dinner suit.

Many Decisions to Make

I had this dinner suit made specifically for my wedding. While I am very much interested in English culture, I am an American and followed the popular custom of having a black tie wedding. But unlike many weddings, my wedding took place in the evening with the ceremony starting at 5:30 pm. Yes, the rule for black tie means that the even should start no earlier than 6 pm, but that’s just a technicality. The wedding was an evening event, and thus black tie was appropriate for the wedding. My wife and I chose to have a black tie wedding because we wanted people to dress up as much as we could reasonably ask, which meant we ideally wanted people to dress more formally than in lounge suits and cocktail dresses. Black tie is a dress code that Americans understand. Morning dress is not familiar to most Americans, and if we had a daytime wedding and stated that dress code on the invitation people may have awkwardly mistaken it for mourning dress.

Before settling on an evening wedding with a black tie dress code I thought of wearing black lounge like James Bond did for his own wedding. My father even wore an Americanised version of it at my parents’ wedding. But I struggled to justify it because I wanted to get something for the wedding that I could wear again. I didn’t think that a lounge suit would have been special enough for my wedding, though a three-piece suit is an admirable choice for a wedding compared to hired monstrosities I have seen at many weddings I’ve attended. Because I wear black tie a few times a year for other weddings and for special operas, a black tie wedding made sense to me on that level. I also wanted a excuse to get the dinner suit of my dreams.

This is my first bespoke suit. In most cases a made-to-measure suit is more than we would ever need from a suit, but for my wedding dinner suit only bespoke could get me what I truly wanted. Through bespoke tailoring one can get a superior cut, which has nuances that make for both the best fit and the most comfort in ways that made-to-measure cannot. The tailoring and ironwork that go into a bespoke suit set it apart from most factory-made suits, and these things also contribute to the suit’s special fit and feel.

Before meeting with David Mason to be measured and to pick out the cloth, I worked out all the details of what I wanted in this suit. I do not have a difficult time deciding what I want when it comes to my clothes, especially because after examining James Bond’s clothes for years I have a few favourite dinner suits from the series and I know what I like best down to the finest detail. I made a list of what I wanted from my dinner suit so I was sure not to forget about any detail when we discussed what this suit was going to look like. I recommend being prepared before meeting with a tailor, even if you don’t know what you want to the same level of detail that I do.

What helped more than anything is that I trust David Mason’s skills and taste, and that made me confident throughout the process that I would be getting the dinner suit that I wanted. I can tell him certain details I want, but I needed to trust that he’s going to execute these details properly. Though this is my first bespoke suit with Mason & Sons, I have gotten to know David well over the past seven years and we both understand each other’s tastes in clothes. David did not balk at any of my ideas, and I was happy to take all of David’s suggestions.

Knowing a house’s style is key when choosing a bespoke tailor as all tailors have their preferences and areas of expertise, and Mason specialises in the classic English/Savile Row style that I prefer. Bespoke clothing is a collaboration with input from both the client and the tailor. I knew that in going with an Anthony Sinclair bespoke suit that the cut was going to be something like what Mr Sinclair himself cut in the 1960s for Sean Connery. What I didn’t know was that they were working on perfecting the cut, and that mine was going to be something even closer to the cut of Sean Connery’s Bond suits and other English suits of the era than they ever made before. My dinner suit was to be the first of this kind from the modern incarnation of Anthony Sinclair!

The first step in getting a bespoke dinner suit is the initial consultation, and for this David Mason measured at their historic Montagu Square flat in London’s Marylebone when I visited last summer. At this time I also chose the dinner suit’s cloth with David’s help. I knew I wanted the cloth to be midnight blue in a mohair and wool blend because I wanted the richer colour of midnight blue instead of black, and I like the sheen and performance of mohair. Since the wedding was in June in New York, the weather could have possibly been very hot so I wanted something that wears cool.

We decided on Holland & Sherry’s 284603 from the Classic Mohair book, which is a 9 1/2-ounce fabric in 75% wool and 25% mohair woven in a plain weave. It’s called “midnight blue”, but it is on the lighter side of midnight and more of a dark navy. Under natural light it looks blue but it looks black under artificial light. The cloth is very crisp with a good amount of body because of the medium weight, but it is not soft. This is likely very similar to the cloth that many of Sean Connery’s and Roger Moore’s dinner suits were made of. I almost went with a 7 1/2-ounce cloth that is a darker midnight blue in a kid mohair blend with a better hand, but I wanted the body of the slightly heavier cloth. It is very comfortable in warm weather because mohair breathes very well.

Looking through books of cloth can be fun, but if you have a specific idea of the cloth you want it can be frustrating if you can’t find what you’re looking for. I knew that I wanted a medium-weight mohair and wool blend in midnight blue and woven in a plain weave. Luckily David knew exactly where to look for the cloth I had in mind. Someone with his experience knows where to look.

The satin silk facings are also midnight blue, but a darker midnight blue that looks black, even in natural light. When comparing it against true black it still looks black, just a little different. The facings are from Bernstein & Banleys Ltd, also called The Lining Company, and is number 60672 in their Silk Facings book. David had intended to make a bow tie out of the facings, but he found that the silk was too heavy to make into a bow tie and it wouldn’t hold a knot. I have not been able to find a midnight blue bow tie that is dark enough to match the facings, so like Sean Connery did I will be wearing a black bow tie with the midnight blue lapels. A slightly lighter midnight blue bow tie would be acceptable to wear with these facings as well.

For the lining we had a little fun and chose a plum-coloured lining, number 50209 from Bernstein & Banleys Ltd’s Linings of Distinction book. It is a viscose and acetate blend iridescent shot twill, and it’s lightweight and breathes well. We initially went straight to the midnight blue linings, but when flipping through the book this lining caught my eye, and before I had a chance to think about it David immediately knew it was the perfect choice. It’s still a dark lining that isn’t going to draw much attention if the jacket blows open, but it’s something that makes this dinner jacket something of my own.

This bespoke suit involved only one fitting: a baste fitting where the suit was basted together and did not have lapel facings or a finished front edge. The trousers were closer to finished at this point. Very few changes were necessary at this fitting and all David did was shorten the sleeves and take in the back, both only a small amount. The balance was perfect. We decided on the placement of the waist button at this time, which I wanted to be slightly lower than the marking on the front. I am not a particularly difficult person to fit, but David’s experience in taking good measurements and his cutter’s talent helped the process go smoothly without any issue in fitting me. David met me in New York City (the city where I live) for the fitting, where he regularly meets clients.

The next time I saw the suit during David’s next visit to New York it was completed and ready to be picked up. The fit of a bespoke garment improves just from wearing it as the canvas conforms to the body over time.

Next week, part 2 will show how the suit came together and will take a close look at the style and details of this dinner suit. 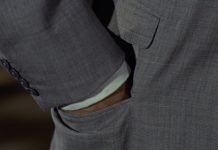 A Guide to Suit Pocket Styles 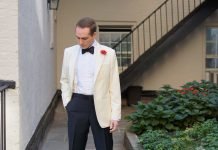