We like to think that James Bond is the most stylish man in the world, but he is merely a character that real people created. Many people are responsible for Bond’s stylish sensibilities. In commemorating the 55th anniversary of the release of Dr. No on Global James Bond Day today, we celebrate the most important people over the past 55 years who contributed to James Bond’s style. Starting with the novel Casino Royale written 64 years ago, James Bond’s creator Ian Fleming invented all of the basics of the James Bond character, from his job in the British government to his heavy drinking and smoking habits to his womanising. Fleming also gave Bond his pared-down but very particular sense of style. The director of the first James Bond film Dr. No, as well as From Russia with Love and Thunderball, is the person primarily responsible for establishing the film Bond’s style. He dressed Sean Connery almost the same way as he dressed himself, taking him to his tailor Anthony Sinclair and his shirtmakers Turnbull & Asser and Lanvin. The suit is still James Bond’s primary uniform today, and the overall style was established by Conduit Street tailor Anthony Sinclair for Dr. No. Sinclair provided James Bond with elegant West End-style suits that have a more natural-looking silhouette than most Savile Row suits have. Sinclair tailored a gentle silhouette for James Bond that gave him a confident yet comfortable look, with soft shoulders, elegantly roped sleeve heads, a strong chest, a softly shaped waist, a low button stance and trim but pleated trousers. Sinclair’s suits were lightweight in both the fabric and construction compared to other English suits at the time.

Narrow lapels made this timeless silhouette more relevant to the 1960s, but it is still a silhouette that is still admired today because of how well Connery wore it. James Bond’s suits since have continually been compared to the standards set by Sinclair.

Turnbull & Asser was Sean Connery’s shirt maker in most of his James Bond films, and they also made shirts for some of Pierce Brosnan’s and Daniel Craig’s Bond films. Though many different people at Turnbull and Asser worked on the Bond films between 1962 and 2006, the most significant person there was the first person to fit James Bond’s shirts.

This person is the famous shirt designer Michael Fish, who opened a shop called Mr Fish in the mid 1960s where he sold boldly printed shirts to rock stars. Before that, Fish worked for Turnbull & Asser where he fitted Sean Connery in blue, white and cream shirts with the scallopped cocktail cuff that Connery made famous. With the return of the cocktail cuff shirt in Spectre, Fish’s legacy lives on. “Shirtmaker to the stars” Frank Foster has been involved with the wardrobes of more James Bond films than any other person has. Foster made Sean Connery’s shirts in Goldfinger, George Lazenby’s shirts for On Her Majesty’s Secret Service and Roger Moore’s shirts in all of his Bond films. Foster was involved with the Bond films starting with Dr. No and made shirts for many of the actors throughout the series besides James Bond, such as Anthony Dawson, Robert Shaw, Gert Frobe, Walter Gotell, Topol, Louis Jourdan and Christopher Walken.

Frank Foster’s style was typically for a closely fitted shirt with unique cuff designs (including his own takes on the cocktail cuff), prominent collars and a placket stitched close to the centre. George Lazenby’s ruffled shirts from Foster, despite looking dated today, were nevertheless beautiful creations. In the early days of Bond clothes, the clothes were made in the style of the craftspeople who made them with a little input from a costume designer or a wardrobe master. Later, costume designers took on more significant roles in determining the clothes that James Bond should wear along with necessary product placement agreements. Costume designer Lindy Hemming is the first prominent figure in the modern world of James Bond costume.

Hemming is responsible for establishing the style of two James Bonds in their debut films, Pierce Brosnan and Daniel Craig. Hemming worked with Brioni to tailor her Bonds and their stuntmen for the extreme requirements of filming modern action films with the stars in suits. She is responsible not only for the design of Daniel Craig’s evening wear for the poker game in Casino Royale but also for all of the other men at the poker table.

Hemming has also been involved with James Bond costume projects beyond the films, working on the Designing 007 and Madame Tussauds exhibits. As the costume designer for the last two James Bond films, Jany Temime has been one of the most controversial figures in James Bond fashion. Similar to how many of Roger Moore’s suits are recognisable as being of their time, the same will be said of Daniel Craig’s tightly fitted suits of the 2010s. Despite the fashionable fit of Craig’s suits, Temime chose classic and beautiful blue and grey suitings for Craig to wear.

Where Temime will be truly remembered is in the casual clothes and quintessentially British brands she dressed Craig in. From shoes and boots by Crockett & Jones to jumpers by John Smedley and N.Peal to Sanders & Sanders chukka boots to Dents gloves a waxed Barbour jacket to a Matchless suede jacket, Temime introduced the ultimate British world ambassador to brands he should have been wearing a long time ago. Other casual wear like the Billy Reid Bond pea coat and various Tom Ford pieces have since become Bond classics.

Many other people deserve mention for their contributions to James Bond clothing, such as tailors, Dimi Major, Cyril Castle, Angelo Vitucci, Douglas Hayward and Checchino Fonticoli, fashion designer Tom Ford, other costume designers such as Louise Frogley, and stylish directors such as Peter Hunt and Lewis Gilbert. James Bond actors Roger Moore and Daniel Craig are also responsible for bringing their own fashion senses and favourite styles to their Bonds. Sean Connery and Pierce Brosnan also deserve a mention just for wearing what they were given so perfectly. 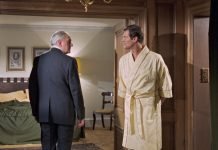