There are many guidelines to follow when dressing well, but James Bond follows a few specific rules of his own.

1. Suits should be shaped and structured

James Bond’s suits vary considerably in their details. Suit jackets may have either two or three buttons down the front or one vent, two vents or no vent in the rear. Suit trousers may have pleats or no pleats, turn-ups or plain hems, belt loops or side adjusters. But something that Bond’s suits always have is shape and structure. Bond does not wear undarted American sack suits. His suits have suppression at the waist and fullness in the chest to give him an elegant yet powerful look. Bond also does not wear soft Neapolitan suits. His suits always have structure with a heavy canvas that maintains the shape of the suit. There’s always something in the shoulder too, whether it’s a very thin layer of wadding or a thick pad. Pierce Brosnan has sloping shoulders, and padding gives him more presence. Padding also smooths out Daniel Craig’s muscular shoulders to give him a more elegant silhouette and help the suit drape better. 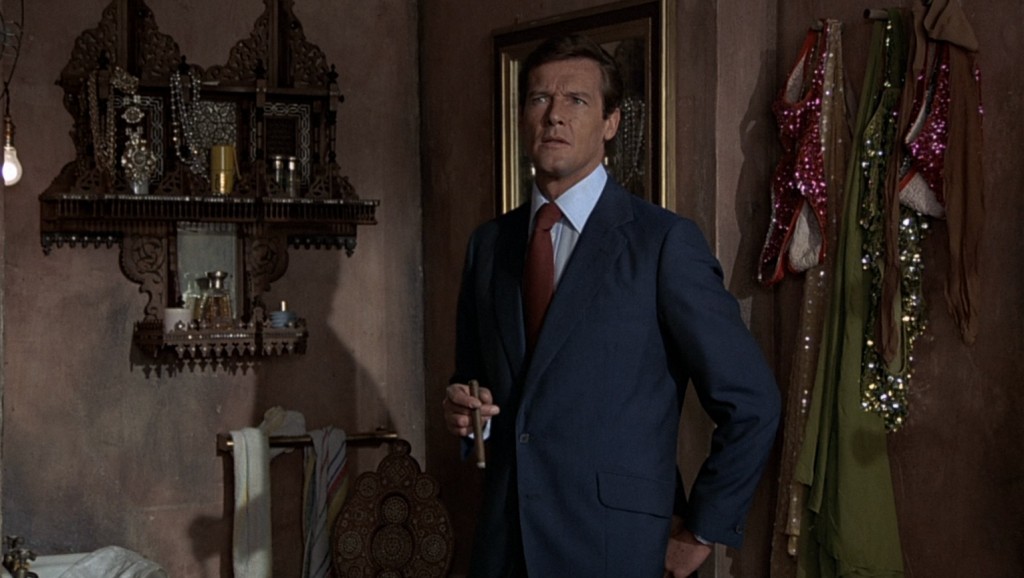 2. Fashionable details are okay in moderation

Bond’s dress is rooted in classic British style but it considers current fashions, thought it does not allow current fashions to define the clothes. In the 1960s, Sean Connery wears narrow lapels and ties, but all other aspects of his tailored ensembles do not date. In Skyfall and Spectre, Daniel Craig wears outfits that would be entirely classic if it weren’t for the “shrunken” fit. However, good fit should not come at the cost of fashion. Every Bond makes some concession to the fashions of their times, but there’s always a strong element of classic style in Bond’s clothes.

3. Shirts for black tie should have a turndown collar

James Bond is famous for dressing in black tie, and whether his dinner jacket is black, midnight blue or ivory, he always wears a shirt with a turndown collar with his dinner jacket. Bond’s collar is usually in the form of a spread collar. Shortly after it was introduced for black tie by the Prince of Wales in the 1930s, the turndown collar has been standard for black tie in Britain, with the wing collar since seen as old-fashioned and stuffy. And even though Bond likes to dress up, his tastes lean toward more relaxed and simple styles, which the soft turndown collar better suits than the stiff, fussy wing collar does. 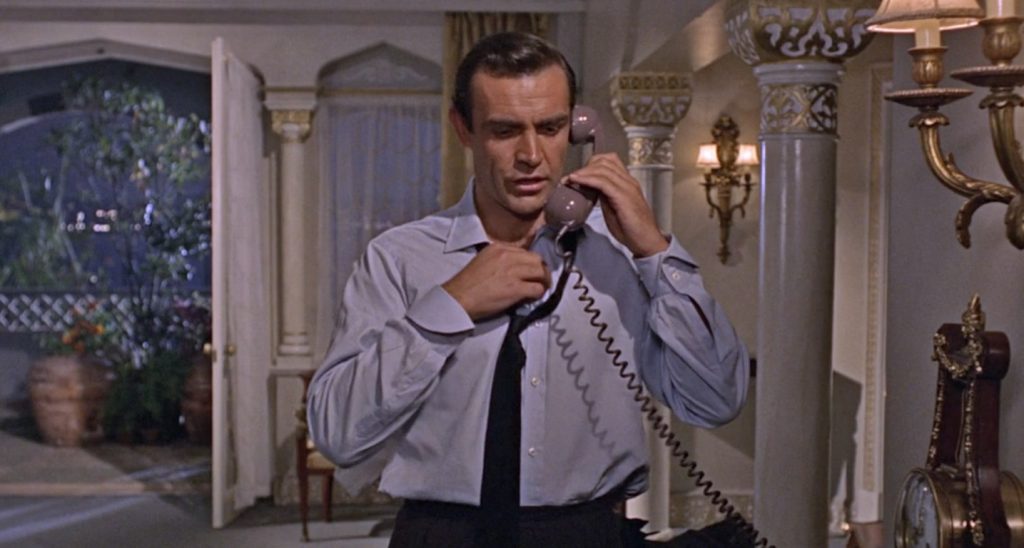 4. Shirts worn with tailored clothes should not have pockets or button-down collars

When James Bond wears a suit or an odd jacket, his shirt never has a pocket or a button-down collar. Button-down collars are too American and too informal to wear with Bond’s structured suits. Pockets are also too informal, as they ruin the clean front of a shirt. They look jarring when the jacket is opened and serve no purpose when Bond wears a three-piece suit. And if the shirt is closely fitted, as in the case of Lazenby’s, Moore’s and Craig’s shirts, a shirt pocket would not have enough slack to be useful. Bond’s jackets have plenty of pockets for him to store whatever he may need. The exception to the pocket rule is in Licence to Kill when Bond wears American-sourced shirts with his suits.

Bond’s shirts are almost always white, light blue or cream, usually solid with the occasional simple stripe. Lighter shirts are more formal than darker shirts and provide a canvas for the tie. The personality in Bond’s shirts comes from the cuffs, whether the cuffs are distinctive cocktail cuffs, double cuffs with a tasteful pair of cufflinks or an extra-large single-button with an extra-large cuff button. Bond’s ties are darker than his shirts, and Sean Connery established that Bond wears very dark, plain ties. Usually his ties are grenadine silk or, occasionally, knitted silk. Subsequent Bonds started branching off into lighter and brighter ties, but the ties are still often plain, and if not they usually have a tasteful stripe or a small neat pattern. No matter how light Bond’s tie is, it is always darker than his shirt. A light tie and a dark shirt is a jarring combination that makes the tie pop too much. This disrupts the harmony of the entire outfit and distracts from the person wearing the tie. 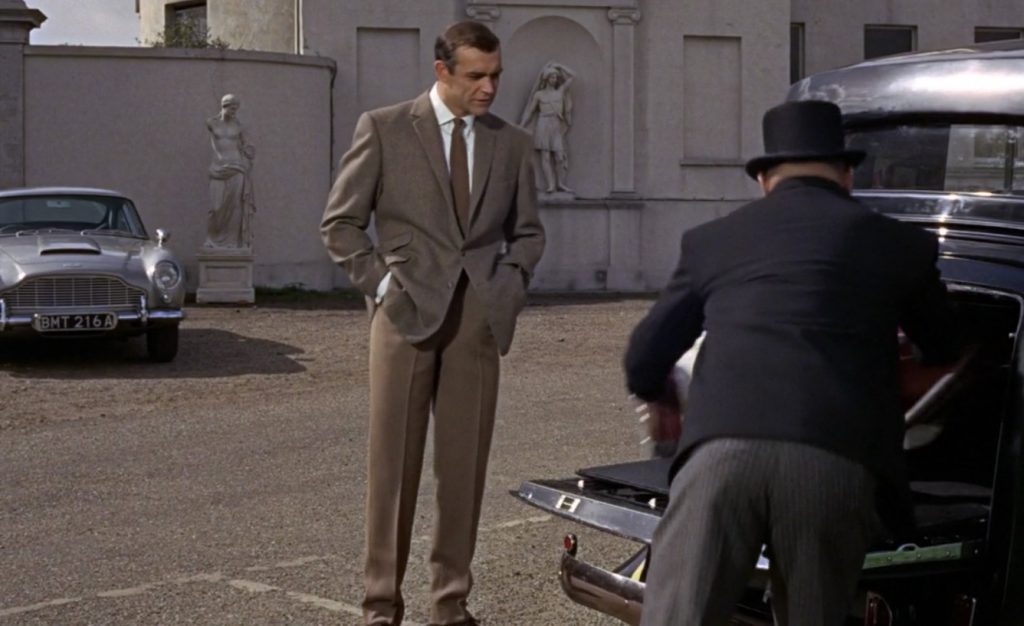 6. Contrast between odd jackets and trousers should be minimal

When Bond wears an odd jacket, he often wears trousers that don’t have a whole lot of contrast with the jacket. Examples of this are Connery’s navy blazer and dark grey trousers in Dr. No, Thunderball and Diamonds Are Forever; his brown tweed hacking jacket with fawn trousers in Goldfinger and Thunderball; Roger Moore’s tan cotton jacket and stone trousers in The Spy Who Loved Me and Craig’s light brown jacket with khaki chinos in Spectre. Except for the example in Spectre, there is enough contrast to be able to tell that the jacket and trousers are not a mismatched suit. Bond’s other examples show the minimum amount of contrast that is necessary. This lower contrast helps Bond to not stand out in a crowd, just as a spy should not. 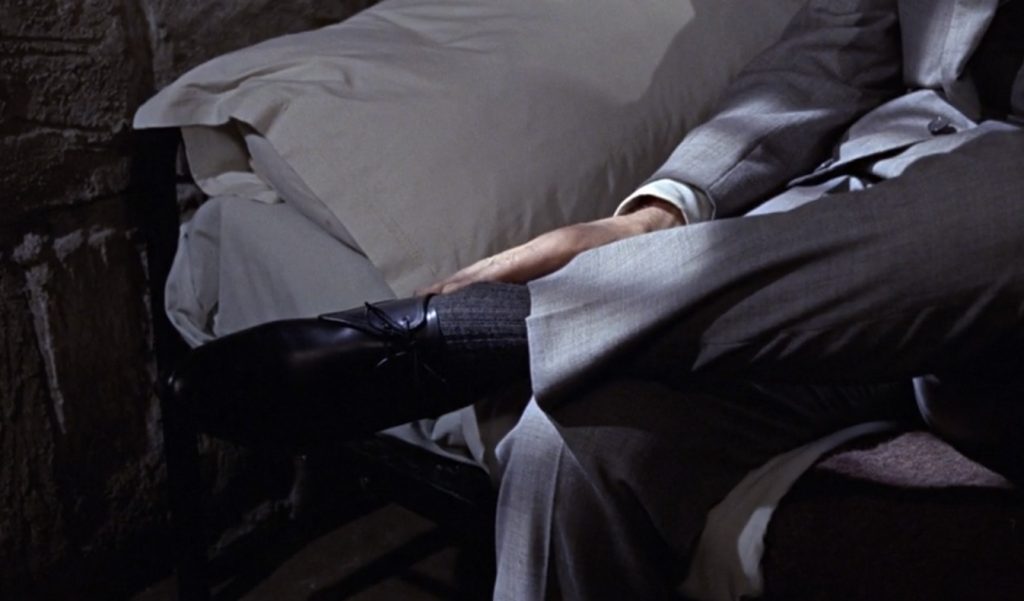 7. Wear black shoes with all blue and grey suits.

James Bond’s typically conservative British style dictates that he always wears black shoes with his blue and grey suits. Likely stemming from Bond’s military days, his choice of black shoes lends a dressy and serious look to his suits. He can also go anywhere in the world and be confident that his black shoes will provide him with the proper cover as a businessman. There’s nothing wrong with wearing brown or burgundy shoes with blue and grey suits, but it’s not Bond’s style.

Above all of these rules for dressing like Bond is the universal rule that clothes should fit and flatter the person wearing them.

Unlike Bond’s tailored ensembles, he follows few rules for casual clothes. With a handful of exceptions, Bond’s casual clothes are always tasteful, fit well and never draw attention to him.